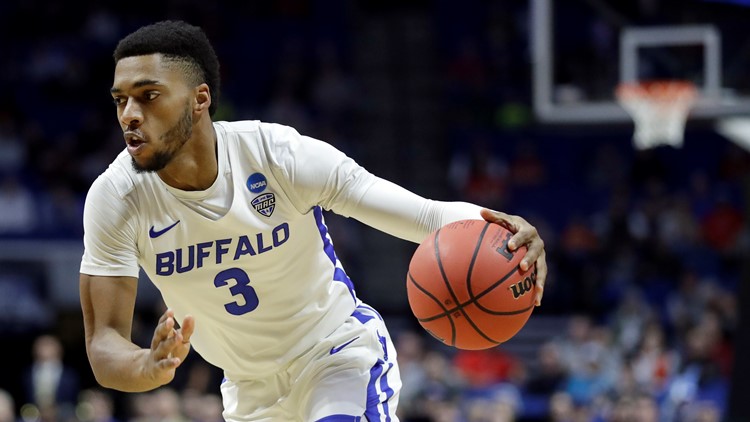 Photo by: AP
Buffalo's Jayvon Graves heads to the basket during the first half of a first round men's college basketball game against Arizona State in the NCAA Tournament Friday, March 22, 2019, in Tulsa, Okla. (AP Photo/Jeff Roberson)

Not only was the University at Buffalo men's basketball team playing for a little revenge, it was also playing to improve its seeding in the MAC tournament in Friday night's game at Kent State.

Earlier this season, Kent State beat the Bulls at Alumni Arena and they wanted to give it back to them on their home court. Mission accomplished.

UB beat Kent State, 104-98 in double overtime in a game that certainly lived up to the hype.

Leading up to the game, senior guard Davonta Jordan called it a "rivalry game" and said it always feels that way whenever they play Kent State.

With the win, UB now has sole possession of third in the MAC tournament seeding at 9-5 in conference play with four games left in the regular season. The top four seeds get a first-round bye and go straight to Cleveland.

Jayvon Graves was a man on a mission in this game. He ended with a career-high 33 points including a clutch 3-pointer with 2 minutes, 11 seconds left in double overtime that helped the Bulls pull away for good.

Jordan also ended in double figures with 20 points while Antwain Johnson ended with 18.

Up next, Buffalo heads to Ohio on Tuesday night.