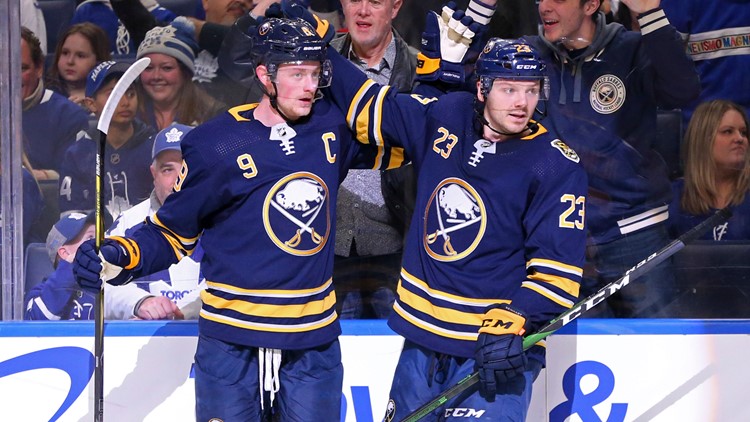 Photo by: AP
Sabres forward Jack Eichel, left, celebrates his goal with forward Sam Reinhart during the third period against the Toronto Maple Leafs on Sunday in Buffalo.

In case you didn't know, Eichel thrives in these games against Buffalo's top rivalry. With his goal Sunday night at KeyBank Center, he now has 23 points in 17 career games against the Leafs.

I mean, just look at this celebration:

After the game, when he was asked what he was doing and if he was telling Leafs fans to sit down, Eichel said, "I don't know, I'll let you guys make your own assumptions on it."

He said it with a smirk, by the way.

Eichel's 14 goals against Toronto are the most for him against any other team. His goal started an offensive explosion where the Sabres scored three times in 1 minute, 31 seconds in the third period to win it 5-2.

The Sabres have now won four out of their last five and moved within eight points of Toronto for third place in the Atlantic division.

It's still an uphill climb, but games like this one have fans saying, "What if?"

Once again they showed moments of what it takes for this team to be competitive, just like we saw Thursday night against Columbus. If only that was there consistently or started right out of the all-star break.

They're still searching for how to play like that on a regular basis in order to get back to the level of success like the teams they honored on 2000s Night had.