In terms of on the field, McDermott's biggest concern for the Bills is the timing of the passing game

Bills coach impressed with how WNY community responding to pandemic 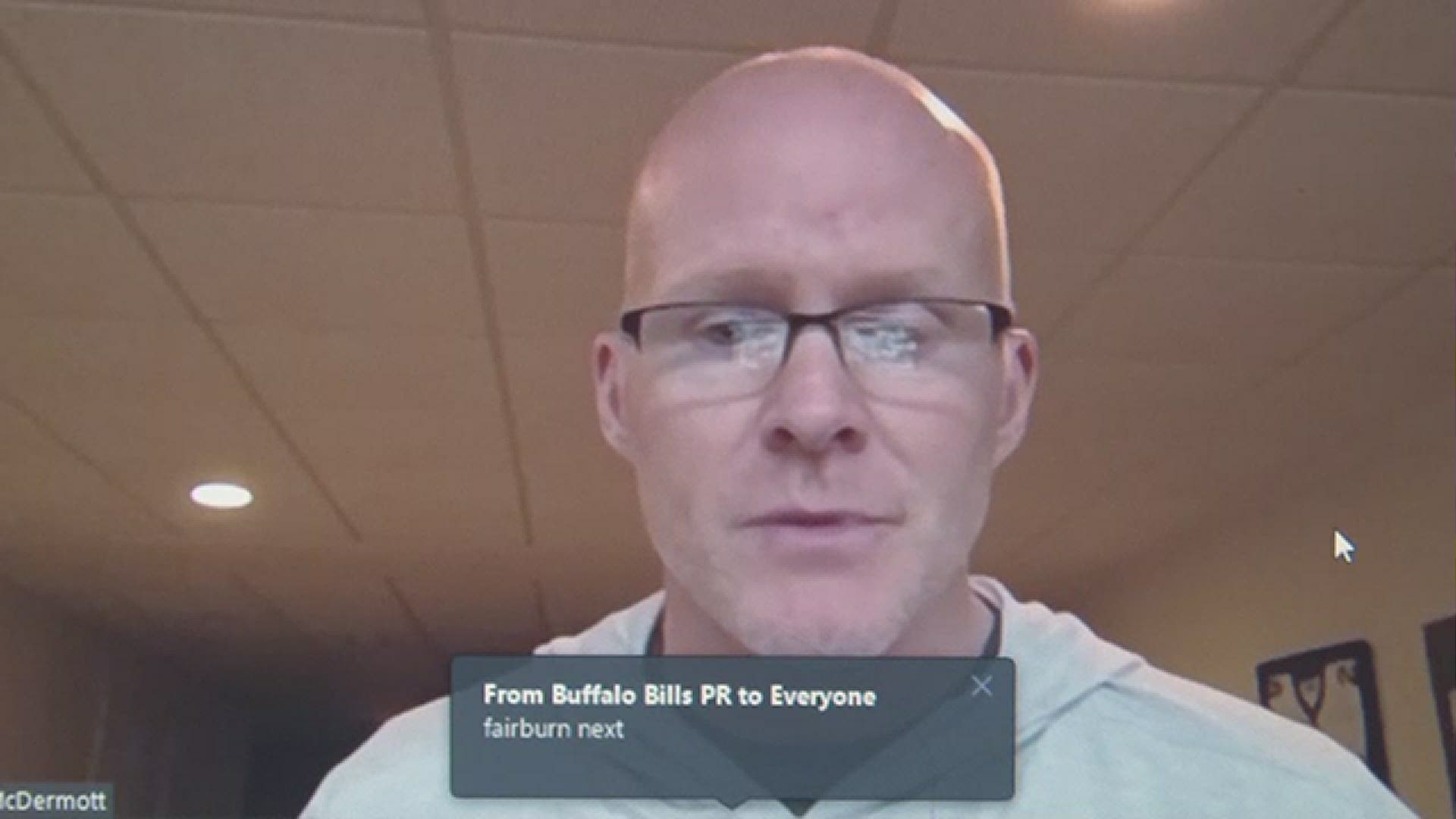 Like all the others McDermott was at his home and on a ZOOM call.

Plenty has happened since the last time McDermott was heard from. The pandemic has shut down great portions of society. The NFL draft was held virtually for the first time ever. McDermott said it was interesting to be home during the draft. Sometimes it made it tougher to communicate with GM Brandon Beane. Sometimes his younger children distracted him from the job at hand.

Earlier this year, Beane engineered a trade for wide receiver Stefon Diggs,  but due to the coronavirus pandemic, McDermott's interaction with Diggs, like all the other players, has been done online.

"When you look at Stefon's production over the course of his career that speaks for itself. He's played in big games, he's had big roles in those games," said McDermott.  "We believe its been shown and proven that people are able to come to Buffalo and become the best version of themselves. And he's certainly been awfully good to this point. Its an opportunity for him to grow and its an opportunity for us to get a good football player that will help us win. It would be a lot easier to get to know one another if we were together but the communication to this point has been top notch."

The Bills have had a busy off season in free agency and they just completed the NFL draft. When AP writer John Wawrow said this team is built to win isn't it.

McDermott said, "You're beautiful man. Throw the fast ball high and inside, chin music fastball. We're definitely further along then when where we were when we got here and that's part of the goal. You want to be able to say that. You know our roster, give a lot of credit to Brandon and his staff, they've done a phenomenal job of, and not just the draft, but also its a 365 day a year job. So filling gaps and holes through free agency, the waiver wire at times when we can, although we have not been very high on that with where we rank in terms of the claiming order but just finding different ways to make our team better whether its top, bottom or middle third of our roster."

One way the Bills definitely need to get better is in scoring. They simply didn't score enough points last season.

"I would love to take a seat on the bench in the fourth quarter in one of these games and maybe eat an orange slice or something, or drink a Gatorade, and have my heart not go a million miles an hour. But, that's the league too you know. Its a touchdown give or take game every week. To have a balanced football team we need to score points and that's been an emphasis and a theme that we've talked about since the end of the season last year and I'm encouraged by what we've added personnel wise to help us in that category as well as the work our offensive staff has done this off season."

McDermott added that "the biggest thing is the timing of the passing game" is his biggest concern with the team unable to be together.

In terms of dealing with the pandemic, McDermott said, "It's been awesome, the whole community of Western New York. It just reaffirms what I first believed about the people of Western New York and our fan base in particular. Its been incredible and I'm just glad to be a part of it."

RELATED: Cuomo on Bills camp: "Ask me at the end of June"