Down a score with 1:49 on the clock, the Crusaders pulled off a remarkable drive capped by a moment they will remember for the rest of their lives. 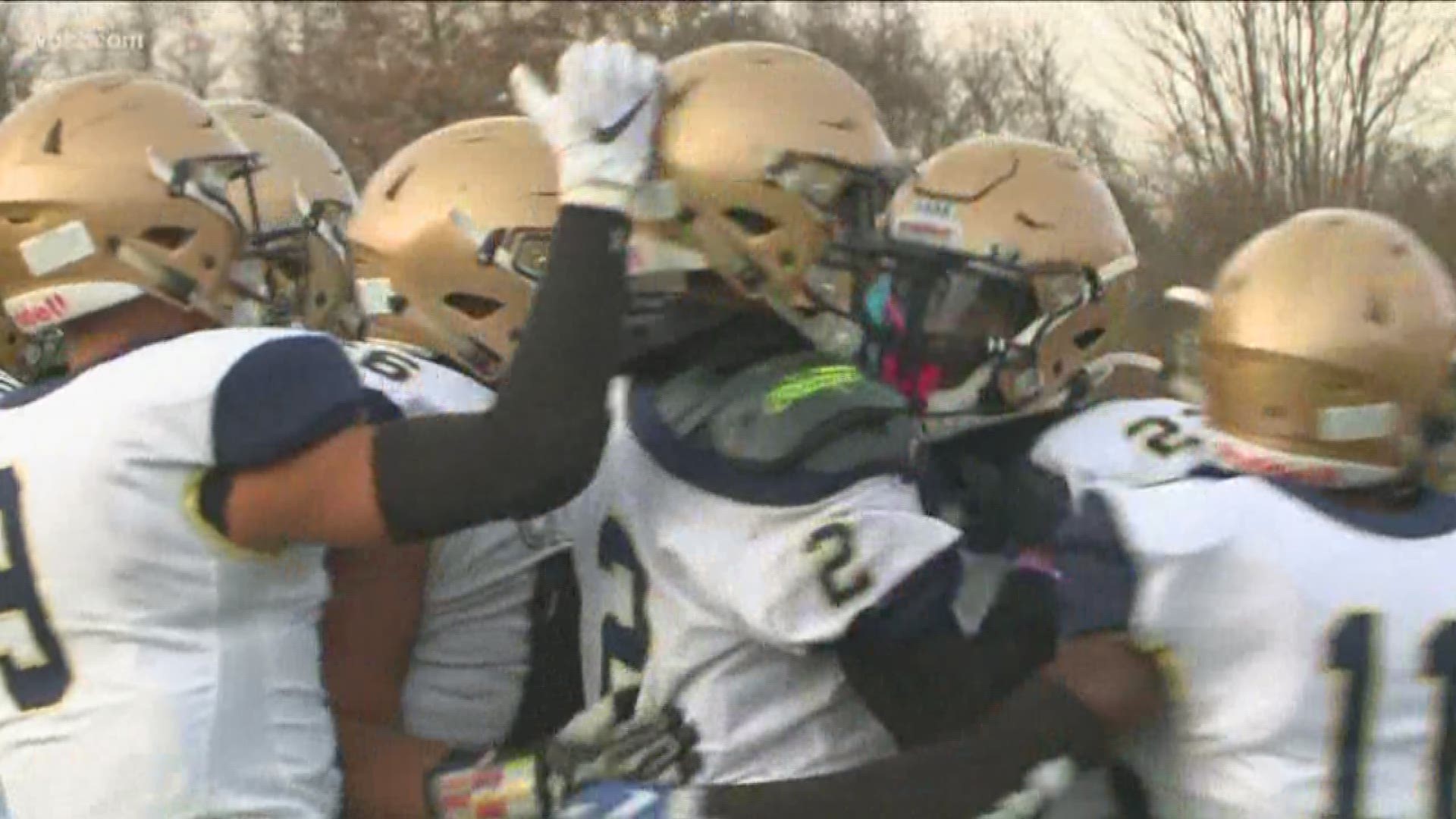 BUFFALO, N.Y. — After taking a 7-0 lead in the second quarter Saturday’s Catholic School New York State title game against Cardinal Hayes, what was a tightly played game unraveled for the Crusaders as the Cardinals took a 24-10 lead with just over nine minutes to play.

“I thought we were ready to play," Canisius coach Rich Robbins said. "Came out pretty good, and we had a couple bad muffs on special teams, some onside kick stuff, and all the momentum swung their way.”

Running up tempo, the Crusaders managed to cut that lead in half on an 8-yard run from Joe Dixon with just over five to go.

The Cardinals got the ball back, but Canisius held and took over on their own 14 with 1 minute, 49 seconds to play.

Sophomore quarterback Tyler Baker was on the sidelines taking in some final coaching instructions. “Can’t take sacks, you understand me? We’re going to have one time out, alright? Let us call it. Don’t call it, OK? Hey, be great man. Have a lot of fun.”

With several short passes, Canisius moved down to the 13.

“Completions, get out of bounds, and score honestly," Baker frankly detailed.

There they were faced with a 4th down play with just 3.7 seconds on the clock. One play for a chance to tie. Seconds later, sophomore receiver Nik McMillan was pulling down a Baker pass over two Cardinal Hayes defensive backs.

Robbins gushed about the play. “What a catch by Nik McMillan. I mean that kid is just special. He’s a special receiver."

“I just knew my receiver was going to go up and get it," Baker said. "He told me before the play, “Tyler, trust me man. I got you. I got you.” I believed in him, I threw it up, and he caught it.”

The score with zeros on the clock brought the Crusaders within a point, but instead of sending out his kicker to attempt the extra point, Robbins left his offense on the field. There would be no tie. One play to win or lose a state title.

“To go for two at the end, it was a touch decision for me. I kind of went back and forth on it," Robbins admitted.

Just as he was about to send his kicker out, the coach felt a tug on his jacket. It was senior running back C.J. Ozolins.

Robbins was swayed: "When your senior captain comes over and grabs you by your coat and says, “Give me the ball, I won’t let you down,” you’ve got to give him the ball.”

Baker overheard Ozolins plea as well. “C.J., he told us on the sideline, 'Guys, believe in me. I’m going to get this for you,' and we believed in him.”

As the teams approached the line to get set, Baker crouched under center. He took the snap, turned, and handed the ball to Ozolins. And watched. From the sideline, so did Robbins.

“I didn’t like the initial look. The backer came right in and blitzed, but then C.J. just wouldn’t be denied.”

C.J. explained what he saw: “The linebacker blitzed in my gap right away. He knew exactly where I was going. I decided to get low and I told my fullback behind me to help push me, and I said I’m driving my legs and I’m not going down until I’m across that line.”

A pile of pads and players eventually gave way and Ozolins fell forward and hit the ground. He looked up to locate where he had landed. The first thing he saw was the referee, hands raised high in the air.

Robbins was looking in the same place. “When I saw the refs hands go up with zero seconds on the clock, one of the best feelings that I’ve ever had."

"This is surreal," Baker said, searching and failing to find the appropriate words. "This is crazy. This is why I came to Canisius, to win a state title. This is insane. I can’t believe it.”

For Robbins, it was also a moment of reflection. “We’ve worked so hard this last month and I could not be prouder of a group of kids and coaches. Just very proud of our people.”

RELATED: From Kelly 2 Allen: The challenge of becoming a franchise quarterback in Buffalo