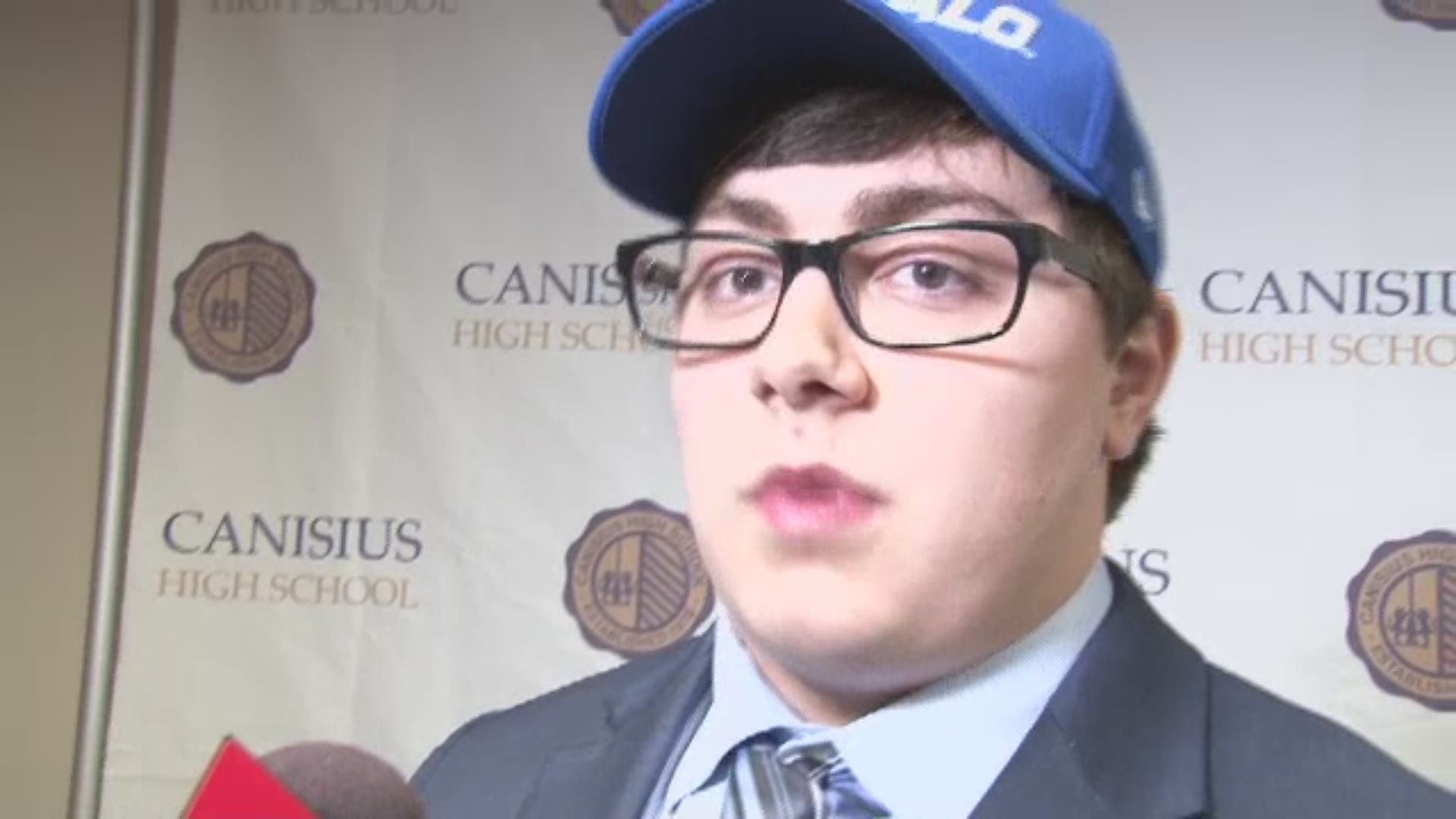 BUFFALO, N.Y. — For a number of Western New York high school athletes Wednesday is a day they will never forget. They signed their letters of intent to play their sport in college.

At Canisius High School offensive lineman Donovan Cornelius signed his letter of intent to play football at the University at Buffalo. He chose UB over John Carroll, Wooster, Bates College and St. John Fisher among others.

"In terms of UB it was the one that filled all the checkboxes for us," said Cornelius. "Close to home, great football, it has my major, (business, finance, economics something along those lines) and it was a family atmosphere which was a big piece. It was just the best fit for the next four years."

By choosing UB, a Division I school Cornelius is betting on himself.

"I knew it was going to be a big challenge, also jumping from D-1," Cornelius said. "And it's attractive in the terms of its going to be tougher, it's going to be a whole new level, and just to even say like I'm a D-1 football player is something that not a lot of people can say."

Linebacker Christian CJ Ozolins signed with Mercyhurst in Erie, Pennsylvania. Ozolins was a finalist for the Connolly Cup given annually to the top high school football player in Western New York. Ozolins said his visit to the school is what convinced him Mercyhurst was the best fit for him.

"It wasn't one of my top choices coming into it, but they invited me on a visit and I really thought it would be a good time to just go down and see what kind of opportunity I had and they really changed my perspective on a school," Ozolins said. "It was a true brotherhood and they made me feel like home. They welcomed me in with open arms."

In the New York State championship game Canisius was one point down after scoring a touchdown with no time left on the clock. Ozolins told head coach Rich Robbins to give him the ball. Robbins did and Ozolins scored the two point conversion to give Canisius the state championship. He said the Lakers coaching staff was aware of that story.

"They didn't believe it at first," Ozolins said. "They said it was written out of a movie and it didn't seem real. It didn't seem real to them and they wanted to talk to coach Robbins about it and confirm with him and yes it was true."

"It's one of the most prestigious academic institutions in the world so that kind of stuck out like a sore thumb," said Bartholomew. His older brother Miles was coached by Columbia head coach Al Bagnoli at Penn.

Bartholomew is excited to be in New York City.

"There's really not a cooler spot you can be in and my brother's actually working on Wall Street there so I'm going to be able to spend some time with him," Bartholomew said.

"My mom went to school there, we have family, that's where all my family is from, about 15 minutes away, so they'll all be able to come to the games," Lauer said. "My official visit was awesome. Players were all super nice and they were really welcoming, it just reminded me of what we have here and I really like that."