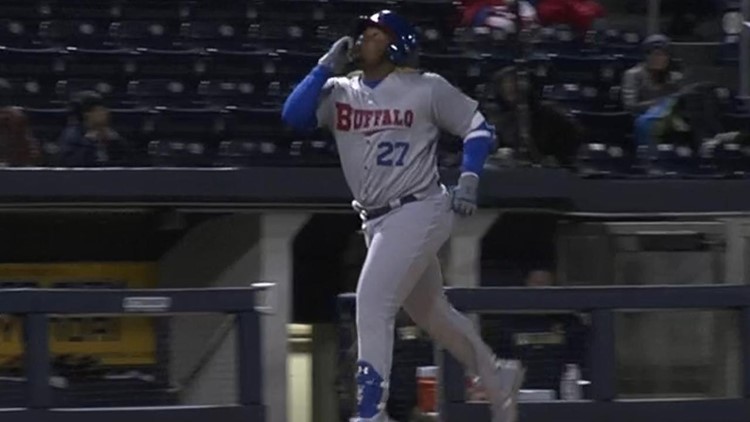 SCRANTON, Pa. — It would've been tough for most prospects to live up to the hype that was generated for Thursday night with Vladimir Guerrero Jr.'s return to the Bisons and the Triple-A level. Then again, most prospects aren't Vladdy.

Playing in his first game with the Herd since ending the 2018 campaign with Buffalo, Guerrero Jr. homered and doubled as part of a four-RBI night as the Bisons fell to the RailRiders, 9-8, in 10 innings from PNC Field in Moosic, PA. Vladdy keyed a seven-run comeback for the Herd that unfortunately went for naught as pinch hitter Mandy Alvarez delivered the game-winning RBI-infield single in the bottom of the 10th.

But Thursday night's game was all about Guerrero Jr. He finished the game 2-4, also reaching base on a walk and a RailRiders fielding error. The 20-year old even added a stolen base to check off almost every line in the box score.

As the club's designated hitter in the third spot in the order, Guerrero Jr. began his 2019 season at Triple-A with a seven-pitch walk. He then came to the plate with two outs in the third inning and just missed a home run to right-centerfield to knock in Eric Sogard from first with a double.

By the time Guerrero Jr. came to the plate in the fifth, the Bisons were down 8-1. But Vladdy got them back in the game in a hurry, destroying a three-run home run to left field for his first blast of 2019.