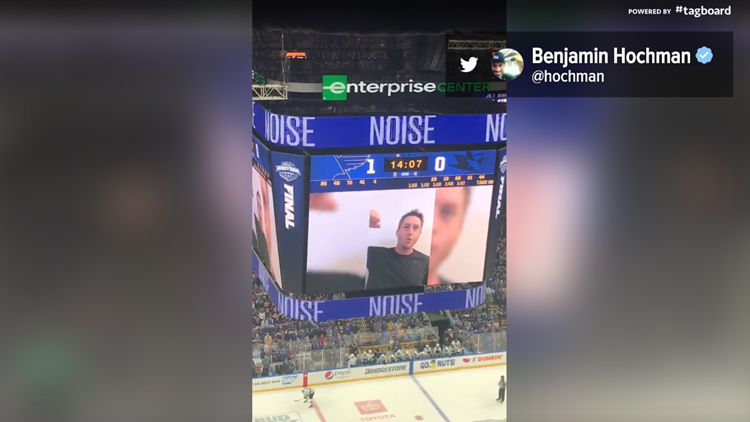 ST. LOUIS — Tuesday, May 21 was a night to remember for the city of St. Louis after the Blues won the Western Conference Final to advance to the Stanley Cup Final for the first time in almost 50 years.

And everyone remembers Game 6 of the World Series with the St. Louis Cardinals and Texas Rangers and how a local baseball player became legendary in 2011.

Even though David Freese is now with the LA Dodgers, he will always support his hometown.

At the beginning of the Blues game Tuesday night, Freese appeared on the big screen at the Enterprise Center getting the crowd hyped for Game 6 shouting "Let's go Blues!"

St. Louis Post-Dispatch Sports Columnist Benjamin Hochman shared the video on his Twitter account and people are loving it.

With St. Louis being such a huge sports town, historically known for their devoted Cardinals and Blues fans, Freese will always be appreciated in our city.

Just last month, when the Dodgers played the Cardinals in St. Louis, Freese got a standing ovation from everyone in the stands and he probably will every time he's at the plate at Busch Stadium.

FoxSports Midwest shared the video on their Twitter account back in April with the caption stating, "Thank you David Freese. Always thank you."

The Blues took advantage of this historical opportunity and defeated the Sharks 5-1 to advance to the Stanley Cup Final.

The Blues will face the Boston Bruins with Game 1 being in Boston on Monday, May 27.

Here's what other people are reading:

Can the Blues help St. Louis end a championship drought against Boston?

Here's what other people are watching: