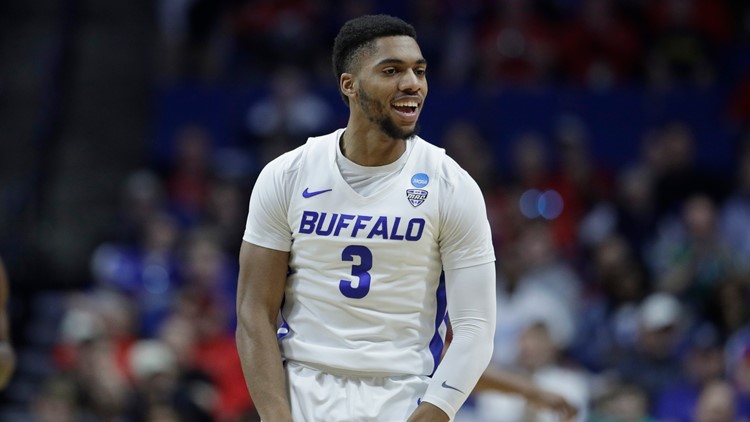 Photo by: AP
Buffalo's Jayvon Graves celebrates after making a basket during the first half of a first round men's college basketball game against Arizona State in the NCAA Tournament Friday, March 22, 2019, in Tulsa, Okla. (AP Photo/Charlie Riedel)

Bulls starting to peak at right time as postseason approaches

AMHERST, N.Y. — Despite all of the changes to the roster and coaching staff, the University at Buffalo men's basketball is right in the thick of things in the MAC and starting to peak at the right time.

The Bulls are playing their best basketball of the season, having won three straight with five games to go in the regular season. They're 17-9 overall and 8-5 in conference play.

"I feel like we already had our bumps in the road, and we learned from our mistakes and our losses. So now, going into the end of the conference, I feel like we finally are putting the pieces together that we were missing at the beginning and starting to play with each other," senior guard Davonta Jordan said.

Up next, the Bulls have a tough task at Kent State on Friday in a big game. The Golden Flashes are right behind them in the MAC.

"It's a big game, it's a rivalry, and they've been so good. They're always a 20-game winner, a contender for the conference title, so much respect for them. It's a good rivalry, as you could see our game here came down to the last play of the game," UB coach Jim Whitesell said.

"This is very big actually. They stole one here at home early in the season, and right now we're just focused on one game at a time and just taking care of our business so we can move up in the conference ranking, but this game is very big. The four years I've been here, it's always been a rivalry game, so it's just going to their house and taking over their house," Jordan said.

The Bulls are trying to win the MAC tournament for the fifth time in six years, something that's never been done in conference history.

They face Kent State on Friday in a nationally televised game on ESPN2.