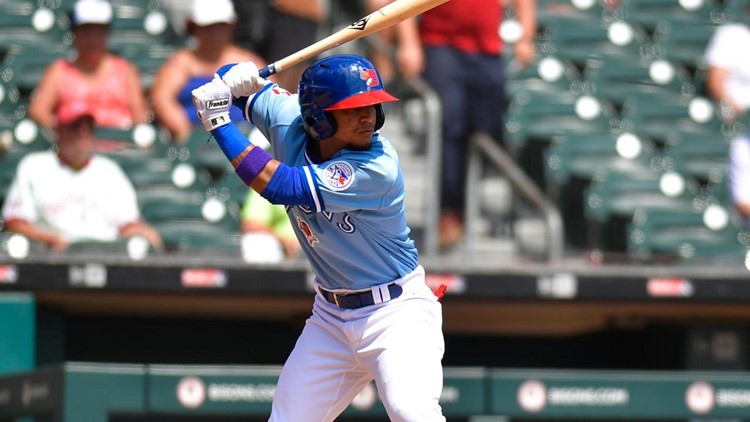 Bisons.com - Santiago Espinal's walk-off RBI single in the bottom of the 11th inning drove home Jonathan Davisand gave the Bisons a 5-4 victory over the Toledo Mud Hens, Wednesday night from Sahlen Field. The win, coupled with Charlotte's wild 13-12 victory over the RailRiders, moves the Bisons to just three games back of Scranton/Wilkes-Barre in the IL North Division.

Playing in just his ninth career game with the Bisons, Espinal delivered the key hit as the Herd held off a Hens team that erased an early three-run Buffalo lead. With Davis as the free base runner at second, Espinal fought back from down 1-2 in the count to skip a full-count offering from reliver Eduardo Jimenez off the back of the mound and into centerfield.

With his great speed, Davis dashed home and beat a wild throw with a head-first slide over the plate to give the Bisons the victory.

The contest went into extra innings tied at three with both teams scoring a run in the 10th. Buffalo got their fourth run when Anthony Alford singled home Michael De La Cruz to make it 4-4.

The Bisons built an early 3-0 lead with solo runs in the first three innings of the contest. Richard Urena chopped a grounder through the infield to score Alford in the first. Jordan Patterson and Roemon Fields added solo home runs in the second and third innings, respectively.

For Patterson, the blast two levels into the Bully Hill Party Deck in right field was his 16th of the season and second in as many nights.

Toledo erased the deficit as four consecutive batters hit for the cycle with one out in the top half of the seventh inning. Daz Cameron homered to right-center of Zach Jackson to get Toledo on the board and Christian Stewart singled in front of Willi Castro's triple into the right field corner. Frank Schwindel then doubled off the base of the left field wall to pull Toledo even.

Adam earned the win for Buffalo, allowing just an unearned run in two innings of relief. T.J. Zeuchstarted for Buffalo and was great, tossing six innings of shutout baseball. He was robbed of a victory for his efforts thanks to Toledo's three-run seventh inning.