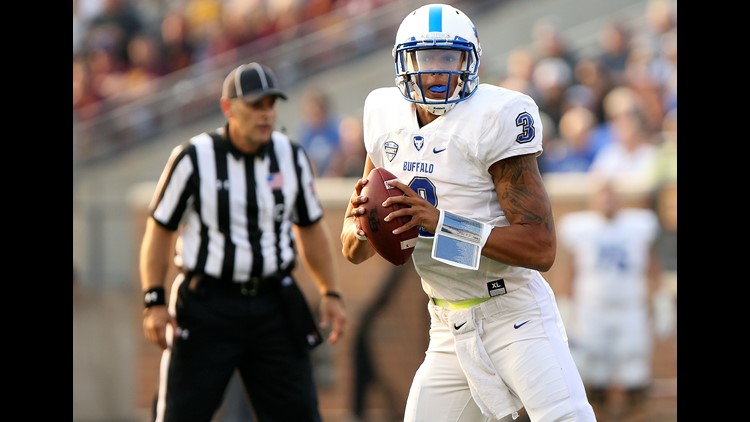 Photo by: AP
FILE - In this Aug. 31, 2017, file photo, Buffalo quarterback Tyree Jackson (3) looks to pass during an NCAA college football game against Minnesota in Minneapolis. Jackson credits his older sister for never allowing the University at Buffalo quarterback to ever get too far ahead of himself. (AP Photo/Stacy Bengs, FIle)

ORCHARD PARK, N.Y. — Former University at Buffalo quarterback Tyree Jackson was not selected in the 2019 draft. However, shortly after the draft ended the Buffalo Bills signed the quarterback as a free agent.

ESPN's Adam Schefter reports that Jackson signed a deal with a guarantee of $75,000.

Jackson will compete for the backup spot behind Josh Allen.

Jackson explored transferring from UB to use his one remaining season of eligibility, but instead of trying to play that one year for a Power Five school, he decided to turn pro.

Jackson is 6 feet, 7 inches and 249 pounds. He was projected as going anywhere from the third to the sixth round of the draft.