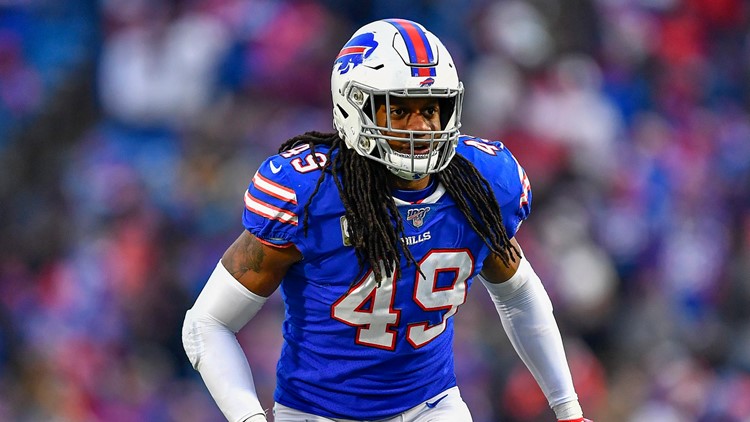 Photo by: AP
FILE - In this Nov. 24, 2019, file photo, Buffalo Bills middle linebacker Tremaine Edmunds (49) prepares for the snap against the Denver Broncos during the fourth quarter of an NFL football game, in Orchard Park, N.Y. Ferrell and Felicia Edmunds can't lose. Nor can they be prouder when the Pittsburgh Steelers host the Buffalo Bills on Sunday night, Dec. 15. It's a game that will feature all three of the Edmunds' sons _ the Steelers' Terrell and Trey Edmunds and the Bills' Tremaine _ facing off against each other. (AP Photo/Adrian Kraus, File)

BUFFALO, N.Y. — The Bills will now have two representatives at this year's Pro Bowl as Tremaine Edmunds will join Tre'Davious White in Orlando.

Edmunds will replace Patriots' linebacker Dont'a Hightower who can't play because of an injury.

Edmunds' first Pro Bowl appearance comes after just his second year in the NFL. He ended 2019 with team-high 115 tackles, 1.5 sacks and 9 passes defensed. His first sack of the season was actually a safety in Cleveland after tackling Baker Mayfield in the endzone.

After tallying 121 tackles last year in his rookie season, Edmunds became the first player to ever tally two seasons with 100 or more tackles by the age of 21.

Edmunds is also the first/second year player to go to the Pro Bowl since Jarius Byrd went as a rookie in 2009.

The Bills drafted Edmunds 16th overall in the 2018 draft.