Young leukemia patient shows why he is #OwenStrong 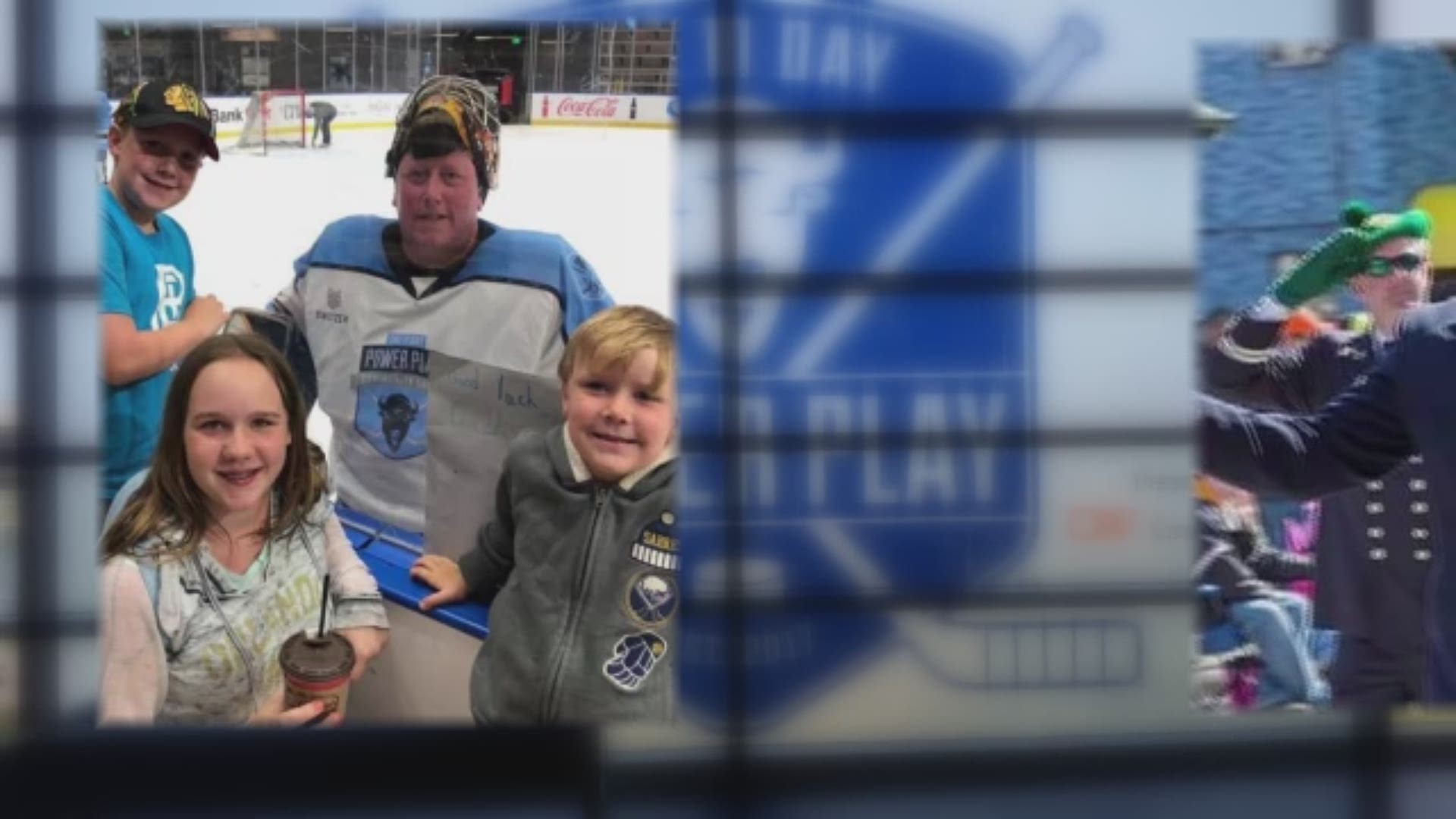 BUFFALO, N.Y. — When Mike Chase strapped on the pads for his first 11 day Power Play in 2018, he was doing so for his fellow firefighter and close friend, P.J. Stanton, who was battling brain cancer at the time.

Little did he know, but just months later his drive to make a difference would hit even closer to home.

On December 20, 2018 Mike and his wife Colleen got the news that their 5-year-old boy, Owen had his own battle ahead.

"When you get that call or that talk from the doctor that says your son has leukemia your world turns upside down. It took a couple days to process and then we have to regroup and one of the doctors came up to us and said well this really sucks doesn't it? Let's move forward. That was kind of the kick in the pants that we needed." And from that point the fight was on. "a lot of people say why me? Well, why not us? "

As a Buffalo Fire Department Lieutenant, working with Rescue One, Mike was used to being the one doing the rescuing, but now he was on the other side of the call.

"Actually, I think it made it a lot harder because we're the ones that are always helping people and now we're on the flip side we needed help."

But help was not far away, friends and family stepped up, as did his family of firefighters.

"From the day Owen was diagnosed, the Fire Department has had my back."

And from day one he saw the strength of his son. That is where the hashtag Owen Strong came from. The logo is a modified Edmonton Oiler's crest because Owen is a die-hard Connor McDavid fan. Just after his diagnosis, he got a little pick-me-up from the man himself. Mike tweeted a picture of Owen in the hospital wearing his new McDavid jersey. Who Tweeted back? none-other than McDavid himself.

Even one of the greatest players in the world was moved. It is not hard to believe when you see him, and his spirit and strength. Owen has to go for regular treatments, including chemo therapy and then hours later, there he is out on the ice, scoring goals, and battling for the puck, just like he is battling leukemia.

"The day that I received a text from Mike Chase when his son was diagnosed, you know the world stopped, it was just silence, because it just brought me back to the day I was diagnosed,"  said 11 Day Power Play co-founder Amy Lesakowski, who is a cancer survivor herself.

She and her family know very well how strong the Chase family has had to be through it all. Their fight, she says, has inspired so many of the players. That is why they chose a split image of Owen and Mike as one of their inspirational posters for last year's Power Play.

"I mean I chose that poster to be a backdrop in my office to remind me every day that, you know, life is never fair. And you know, we have to continue to work really hard at fighting this disease and we will do what we can to hopefully end it."

And back at the fire hall, the signs of support are all around. The #OwenStrong logo is now on their trucks, as well as Mike's helmet. Even some of the nurses in Roswell's pediatric center have been known to wear the logo.

Owen has a little over a year left in his chemotherapy treatments, after that he will have to go in for testing every month. The hope is at some point he will need to be tested just once a year.

If you would like to help them out, Mike says the best way is to contribute to Owen's 11 Day Power Play fundraising page. He says they have been helped in this journey by Roswell Park Comprehensive Cancer Center, Make-A-Wish of WNY, Oishei Children's Hospital and Camp Good Days and Special Times, all four of the beneficiaries of the 11 Day Power Play.

And back at the fire hall, the signs of support are all around... the Owen Strong logo is now on their trucks, as well as Mike's helmet, right next to P.J., who passed away in August after battling three years.

"To see this and work on this rig with all the guys that I work with before. It's just unbelievable."

Even some of the nurses in Roswell's pediatric center have been known to wear the logo.

While Owen inspires, it is by example, he does not like the spotlight, or even to be noticed. So as he sits for his treatment, he often walls out the world with his pillow, just like he did to me.

But I didn't take it personally, once his dad showed me this picture, taken when the Oilers came to Buffalo and Connor McDavid took time out to meet the family. That is Owen's brother Cameron with Connor because Owen was too shy to even get a picture with his hero, so at least i'm in good company.