Womb for rent: Should paid surrogacy be legal in NY?

New York is one of the few states were a woman cannot legally earn money for carrying someone else’s child; however, a bill to repeal the ban has support in Albany. We took a look at the arguments both for and against the new legislation. 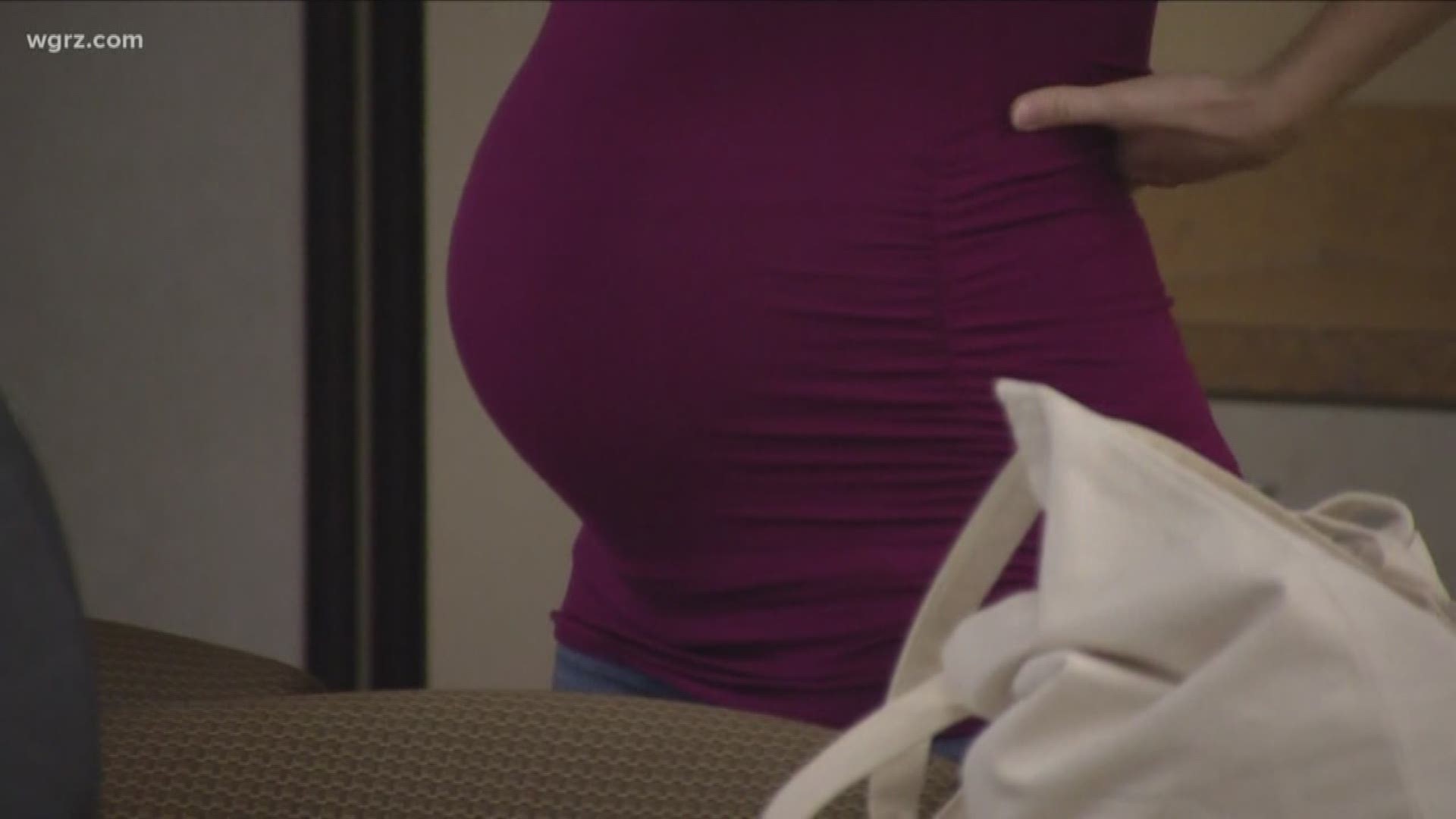 BUFFALO, N.Y. — Mark Ziemba and Nick Nenno are now in the process of renovating their home in Hamburg. While that's a lot of work, Ziemba and Nenno are admittedly excited. They're planning around the possibility of having children.

But the excitement is tempered with a lot of frustration.

The couple got married about a year and a half ago in Buffalo, and even before they tied the knot, having kids was high up on the priority list.

"We're just really excited to be parents," Ziemba explained. "I never was baby crazy until probably the last year. Now, it's like every time we're around babies, I'm just like, 'Ah! I want that so badly.' I'm so jealous...of people."

Nenno added, "We kind of started this process before a lot of our friends were even having kids, which is weird, and now a lot of (their kids) are like one, two years old. And we're kind of still just...stagnant."

They spent the past few years working through their options. Fostering didn't fit their longterm goals because of the possibility that the kids might return to their biological parents at some point. When it came to adoption, they had concerns, being a same-sex couple.

"It kind of put us under a microscope," Ziemba said. "We just didn't feel as though we needed to be under."

That led them to surrogacy.

But after attending conferences and poring over the latest research, a shocking realization. Finding a woman to carry their child, close to home, would not be easy. That's because New York is one of three states where paid surrogacy is expressly prohibited.

2 On Your Side looked for a lawyer in Western New York who might be able to explain what is legal in terms of surrogacy. It was definitely a heavy lift.

The closest attorney willing to speak to us was in Rochester.  Gregory Franklin, with Ashcraft Franklin & Young, LLP, provides legal services to birth parents and adoptive parents in adoption and assisted fertility matters, like surrogacy.

A Gestational Carrier is what a surrogate is called if the baby she is carrying is not biologically related to her. This means the fertilized egg implanted in her uterus is either from an "intended parent," the woman who will ultimately raise the child or from an outside donor.

This differs from traditional surrogacy, where the woman carrying the fetus uses her own egg.

Nearly all surrogacies in America have been gestational since the 1980s after a controversial court case erupted over a traditional surrogate who wanted to keep the child.

Paid gestational surrogacy is legal in 10 states and the District of Columbia. Most other states either allow surrogacy under specific circumstances or by default because they have no surrogacy laws.

In New York, you can still enter into a Compassionate Surrogacy agreement. Franklin represents a number of couples who have done this, "A close family member, a friend, co-worker...will say, 'I will be happy to carry the child for you.'"

But there are risks. Agreements of this kind aren't enforceable in New York. A compassionate surrogate can decide to keep the child even if she has no biological ties to the baby.

"You give birth to a child in New York," Franklin explained. "You are the mother."

For this reason, Ziemba and Nenno are looking out of state for a surrogate, specifically Canada, where their law would name them both parents before birth.

"Emotionally, I can't even imagine going through this process and then being told at the end of it, 'I change my mind,' and we're fighting for custody in court," said Ziemba.

"We want to raise a family in Buffalo," Ziemba explained. "This is where our families are from. So, it just stings to be in a state that doesn't want to...has not addressed this yet."

There are some moves being made in Albany now. The Child-Parent Security Act has been introduced in the state legislatures, and for the first time in 12 years, a bill to define parental rights and repeal the ban on paid surrogacy has some traction.

Governor Andrew Cuomo even threw his support behind the bill earlier this year including the bill in his state budget proposal.

But opposition is strong, from a mix of health advocates, feminists, and Roman Catholics.

"It's baby selling...pure and simple," Kathleen Gallagher told 2 On Your Side. She is the Director of Pro-Life Activities for the New York State Catholic Conference. "Unfortunately, there's a big fertility business booming out there, where baby brokers make large profits, and they're doing it by exploiting poor women...particularly poor vulnerable women. Young girls on college campuses, on military bases, etc. Poor women are going to be carrying babies for probably wealthy couples who want to have perfect babies."

She added further, "This is a form of human trafficking. It is exploiting women as breeders and incubators for other people's children and other people's benefit and for the benefit of the big fertility business. It's not reproductive justice."

Compensation for surrogates aside, attorney fees and agency costs alone can be substantial.

Ziemba is an army veteran and financial planner. Nenno is a special education teacher and ski racing coach. They already spent about $75,000 in agent costs, egg donor compensation, and fertilization. They expect to pay more than $100,000 by the time the first child is born and up to $150,000 by the birth of their second baby.

"For us, it's not about the financial, cause at the end of the day...if you don't have children, who do you leave it to? Where's your legacy?" said Ziemba of the increasing investment upfront. "We've made a lot of sacrifices to do that, obviously, but I don't even think about the money. It's stressful at times, but it's more the process...we just want to see it through."

While they feel blessed to have a total of 12 fertilized eggs ready to implant (six fertilized with Ziemba's sperm and six with Nenno's), so far, they've only had one surrogate contact them. Two weeks ago, she backed out.

"We so badly want kids," said an emotional Ziemba. "And we've invested so much and we really know we can be good parents, but there's not a clean path for us to get there...and it's hard."

What does compensation look like for a paid surrogate? We're told, it all depends on what's negotiated into the gestational surrogacy contract, but $35,000 is a fair estimate.

Gallagher believes the compensation is often much less and criticizes the Child-Parent Security Act for not addressing that, "It doesn't even offer the surrogate mother a minimum wage for the work that she's going to do in bearing that child and giving that child away."

There are protections for surrogates outlined in the bill, namely giving her exclusive rights to make health decisions for herself and the fetus, as well as the right to terminate the pregnancy or reduce the number of fetuses.

Gallagher says more considerations must be made, "There are a lot of health concerns with hyperstimulating a woman's ovaries to get an abundance of eggs by egg donors. There are a lot of health concerns with surrogate mothers carrying babies for other people. There's not a lot of longterm studies that have been done on what are the effects physically and psychologically on these surrogate mothers and on the egg donors and on the donor-conceived children. There's just so many unknowns here that New York State shouldn't dive into this right now."

The New York state legislature has just about seven weeks to bring the Child-Parent Security Act to the floor for a vote. The 2019 legislative session ends in June.

Last week 2 On Your Side sent an e-mail to Western New York lawmakers, asking them six questions about where they stand on the issue of paid surrogacy. The vast majority of state senators and assemblymembers we heard from, while supportive of the parental rights portion of the bill, were against the idea of commercializing surrogacy.

Senate Bill 2071, the Child-Parent Security Act, currently sits in the Senate judiciary committee. The bill is a very complex piece of legislation that I believe requires additional research and analysis before determining if it should be moved out of committee and before the full Senate for a vote. Overturning existing law that has been in place for more than two decades and replacing it with an exhaustive new regulatory framework is a major undertaking and I look forward to examining both sides of this issue more thoroughly, including feedback I have received from constituents on this matter.

The only outreach I received on this issue pertained to keeping the ban in place, which I support. I have serious concerns about the idea of creating a business out of surrogacy. Life is precious; it shouldn't be turned into a commodity as part of a monetary transaction. With New York ranking among the highest in maternal mortality rates, ending this ban may endanger far more women who are desperate for cash. This ban was supported by members on both sides of the aisle and should remain in place.

Thank you for reaching out to me about this very important policy issue. I have some serious reservations about this bill and would be happy to provide more context via an in-depth discussion. I have been digging into this issue and believe it merits a deeper conversation with an opportunity for follow up questions by a reporter rather than a response via email.

(Assemblyman Giglio's) policy is not to comment until the bill is in its final form and ready to be voted on.

Do you think Paid Gestational Surrogacy should be legal in New York? Join the conversation on our social media pages by clicking below: