Why is most of Erie County still in an Orange Zone?

2 On Your Side is seeking answers from New York State regarding current COVID-19 restrictions here in Western New York. 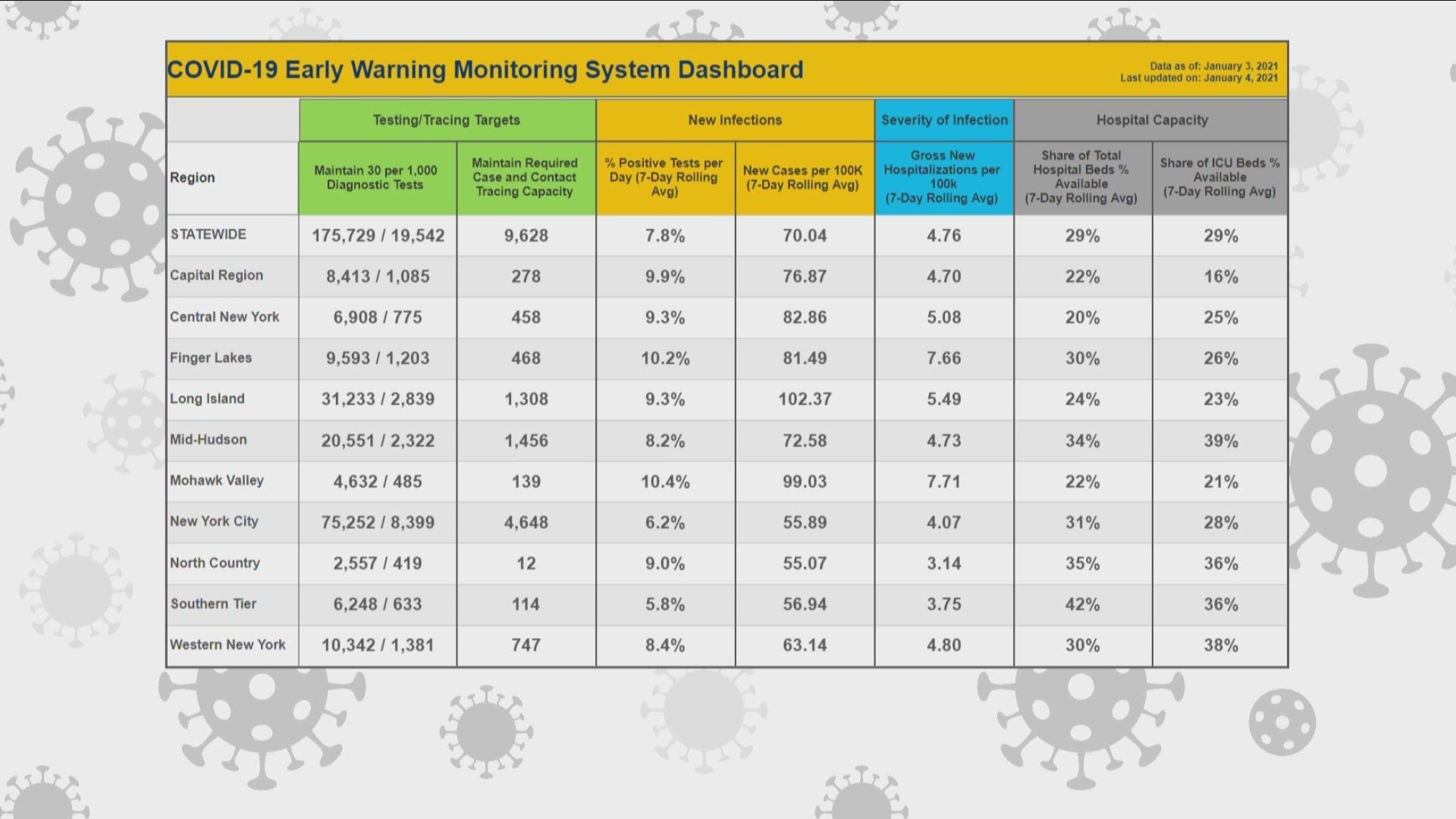 BUFFALO, N.Y. — During Monday's Town Hall, 2 On Your Side discussed the current COVID-19 restrictions here in Western New York and how it compares to the rest of New York State.

Viewers have been asking us a lot of questions about the micro cluster zones in our region and across the state. These are areas that have either been designated in Yellow, Orange or Red zones, which have additional COVID-19 restrictions.

These cluster areas are designated solely by Governor Andrew Cuomo, who says he consults with his health team.

There are a lot of questions, but nobody with the New York State Department of Health or the governor's office would come on our Town Hall segment to provide answers.

The problem with the cluster zones is that there seems to be no rhyme or reason why some areas are designated and others are not. These zone designations determine what schools have to do in order to be open, and also affects local businesses such as restaurants.

Much of Erie County is currently in an Orange Zone, which has the second most strict designations behind the Red Zone. The rest of the county, and parts of Niagara and Genesee counties, are in a Yellow Zone.

These haven't changed in a long time — despite a lot of changes in terms of COVID-19 percent positive rates, hospital capacity, and other factors, especially when comparing our region to the rest of the state.

And that's where this gets problematic, especially for Erie County's Orange Zone. It's targeted for restrictions — even though a lot of other places across the state are far worse, based on all the available data.

So here's what we've determined. Among the 34 Orange and Yellow micro cluster zones across the state, Erie County's Orange Zone actually has the fifth lowest infection rate. Meanwhile, 24 of the Yellow Zones are worse.

So why would Erie County be in an Orange Zone when other places are in Yellow Zones?

2 On Your Side's Leanne Stuck was able to ask Governor Andrew Cuomo about this Monday afternoon during a conference call. The governor responded saying, "I believe the restrictions have helped because Western New York —  your basic thrust is right. We did see a flattening, which is good, then a slight decline — we have seen a recent uptick. But the point about the zones, is put the restrictions in place to control the virus — if we see a decline and a continuing decline we can relax the restrictions."

New York State Commissioner of Health Dr. Howard Zucker chimed in adding, "As the governor said there was a series of weeks where there was a sort of flattening and slight decline. The last couple days unfortunately we've seen the positivity and per 100,000 hospitalizations back up again for Erie County."

So the governor argues why reduce restrictions if COVID-19 infection rates are going up. But there are a few problems with that.

First, while he and Zucker are correct that Erie County's percent positive rate has gone up slightly over the past week, it's lower now than it was a month ago.

Between December 7 and December 26 the week over week rolling average in Erie County dropped for 20 consecutive days. Yet New York State made no change to the Orange Zone.

During a briefing Monday, Erie County Executive Mark Poloncarz said he has advocated for Erie County to move into the Yellow Zone, but said this recent increase hindered that.

At the same time, rates steadily increased in other regions of the state.

A month ago Albany County's percent positive was under 5 percent — now it has more than doubled to over 10 percent. Despite that, there are no Yellow or Orange Zone restrictions in the entire Capital Region.

And let's talk about hospital capacity. You can make a strong argument, as the governor does, that having enough hospital and ICU beds is the most important factor to consider.

When looking at the state's regional dashboard, the Capital Region, in and around Albany, has only 16 percent of ICU beds available —  the worst in the state by a considerable margin. The region has a higher infection rate, which is trending the wrong direction —  and a lot less hospital capacity, yet there isn't a single restricted area in the entire Capital Region. No Orange Zones. No Yellow Zones.

Perhaps there's an explanation for all this as to why some areas have one set of rules, while other areas have other rules. However, no one from the New York State Department of Health would answer those questions on our Town Hall. 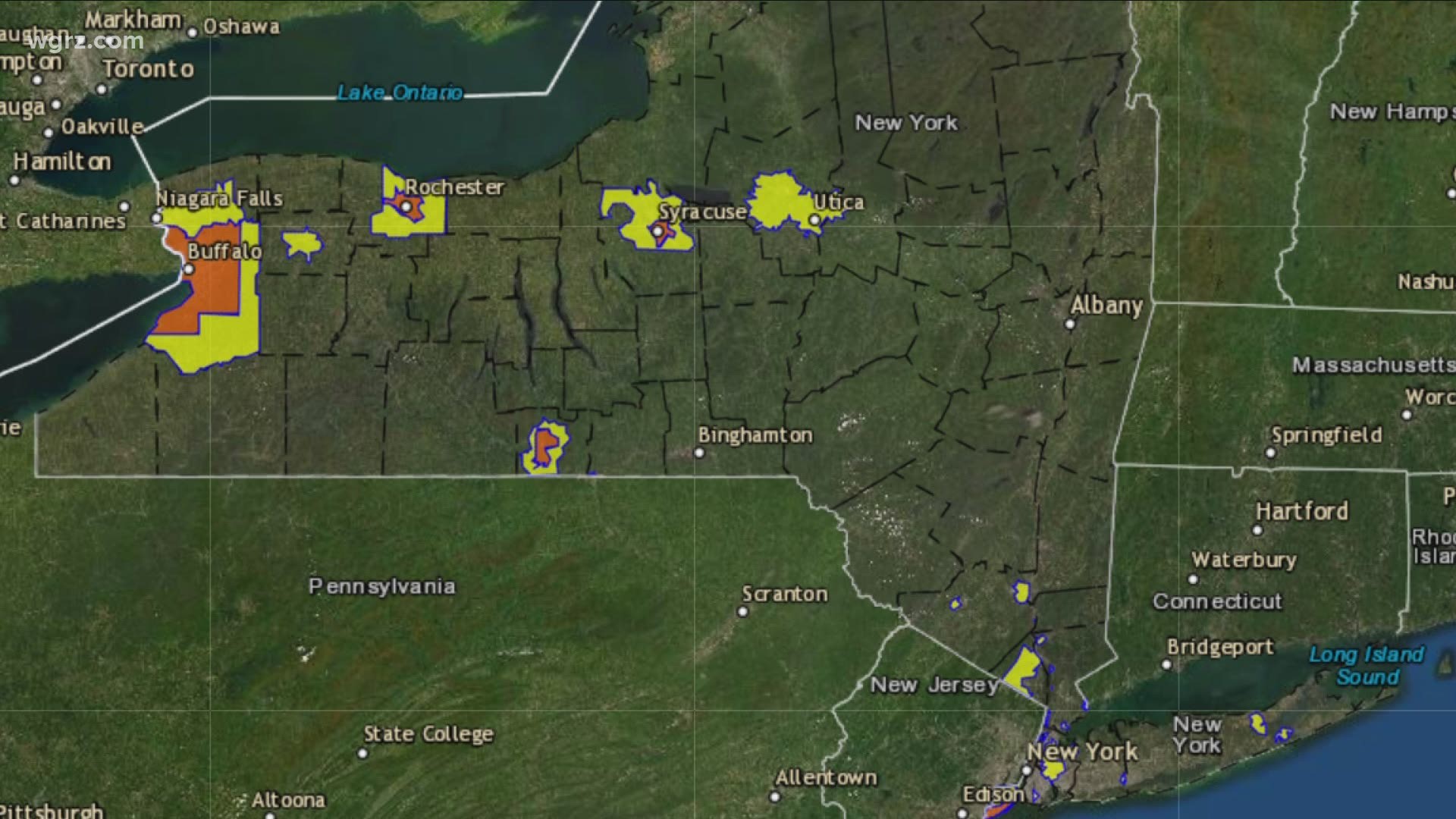