Who runs the world? This local girl

12-year-old Jada Kenner not only won a New York state title this past weekend running against high schoolers, she set a world record in the process. 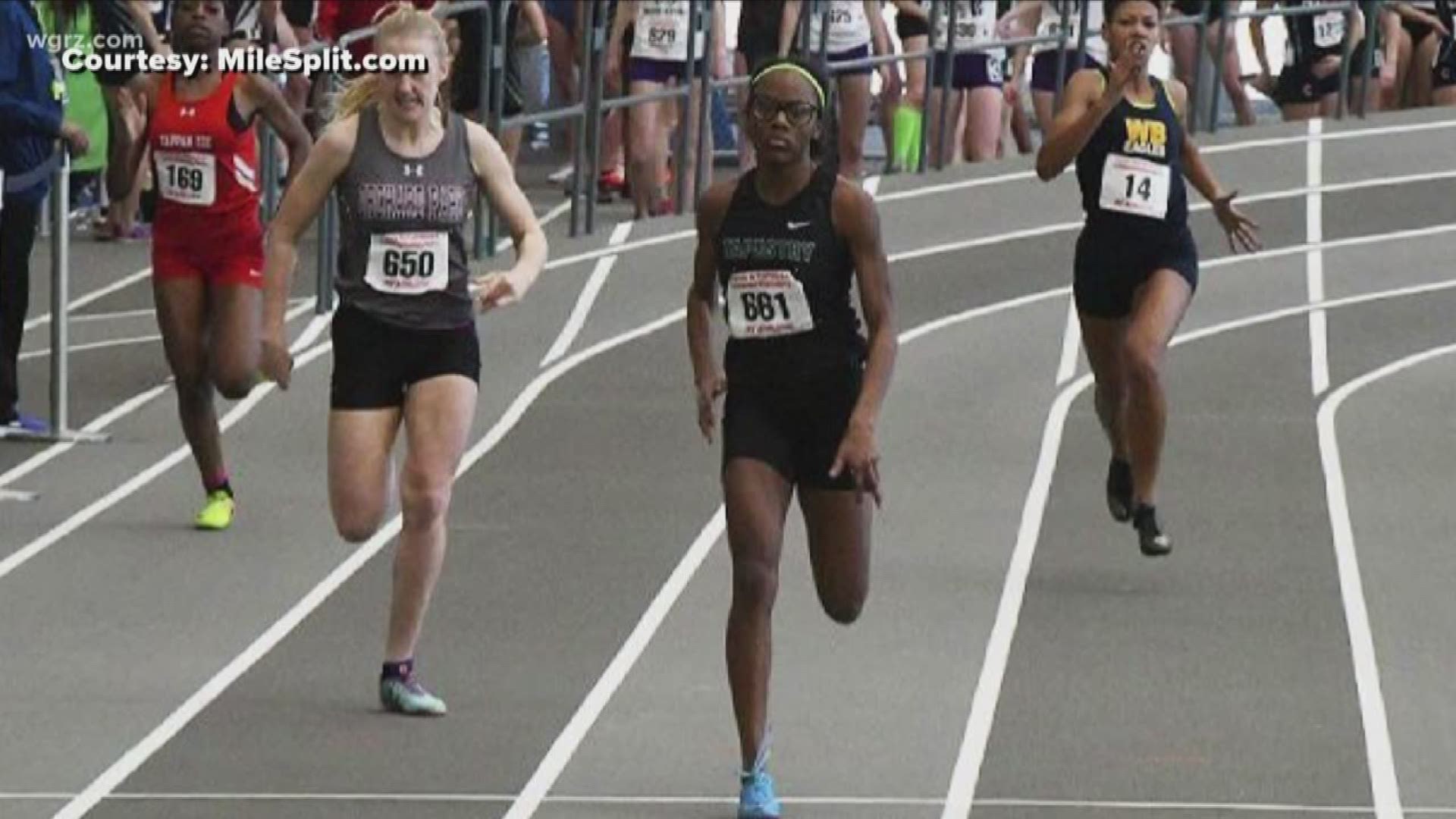 BUFFALO, N.Y. — The halls at Tapestry Charter School sit quiet after an average day of school. On cold, snowy days like this one, this is usually where the track team trains, including 12-year-old Jada Kenner.

“I feel like it’s taken a while to settle in, what I actually did because I’m just like, 'Yeah, I did that,' ” she said.

What she did was something no one her age has ever done. Anywhere.

Jada was in Staten Island this past weekend competing in three events in the NYSPHSAA Indoor State Championships, remarkable itself since she’s only in seventh grade.

“I was happy with whatever I did, but I was just happy that I made it to states because it’s a good accomplishment to make it," Jada explained. “There were two heats of the 300 (meters), so I was the first heat.”

Dan Tryon, the head track coach at Tapestry Charter, was there to push her on.

“She was seeded number two in the race, so we knew there was a chance she could win," he said. "We were hoping she was going to win, but you know things happen, and you never know.”

As a seventh-grader competing in her first year of high school track, Jada wasn't sure what to expect, but as she crossed the finish line the awareness that had faded with the focus of trying to perform at her peak began to return.

Added Dan: “She came running over to me and jumped up and said, “I’m a state champion. I said, 'You won the whole thing, kid.' ”

Then Jada saw her time.

Dan understood what the number meant, but on Monday he received word it meant even more then he imagined.

“We obviously knew she had set that record, the state record, at that meet," he said. "And then this afternoon I got an email from MileSplit, who covers track around the whole country, confirming her age and just asking for her birthdate because she could’ve broken the world record.”

Jada’s time replaced the 40.19 record set by Anna Kerbachova of the Czech Republic in 2013 for the fastest ever timed by a 12-year-old.

“And she didn’t just break the record," Dan elaborated, "she ran it at 39.24, so she beat it by almost a second, and at that point after everything that she’s done, it’s just mind-blowing.”

Despite setting a new world record for a runner her age, Jada sounds remarkably level-headed about the feat.

“It was a (personal record), but I feel like I could’ve ran like a 38.9, something a little bit lower than what I ran," she said. "But I’m so happy that I PR’ed and got a faster time.”

“Not only did she break that record over the weekend but our 4-by-2 broke the Western New York record, ran the fastest time ever," Dan said, "and she’s the second leg of that too.”

For Jada, who's been crafting her ability to run since kindergarten, she imagines her future in 400-meter ovals.

“I see myself going to the Olympics because I feel like there’s no stopping from now," she said, searching for the words.

"I feel like if I stopped, and I wanted to stop and if I stopped, I’d be devastated. I wouldn’t know what to do, so I think I’m going to be doing this for a very long time.”

As someone who has worked closely with Jada and watched how much she puts into improving, Dan refuses to put restrictions on where she can go and what she can accomplish.

“She does everything she can to be the best she can be," he said. "She keeps working the way she’s working, the sky’s the limit and she can achieve anything she wants.”