VERIFY: No, a wedding photographer didn't fake photos for attention

A viral post from a wedding photographer called out a wedding guest for ruining photos of the bride. But some comments claim the whole thing is fake. 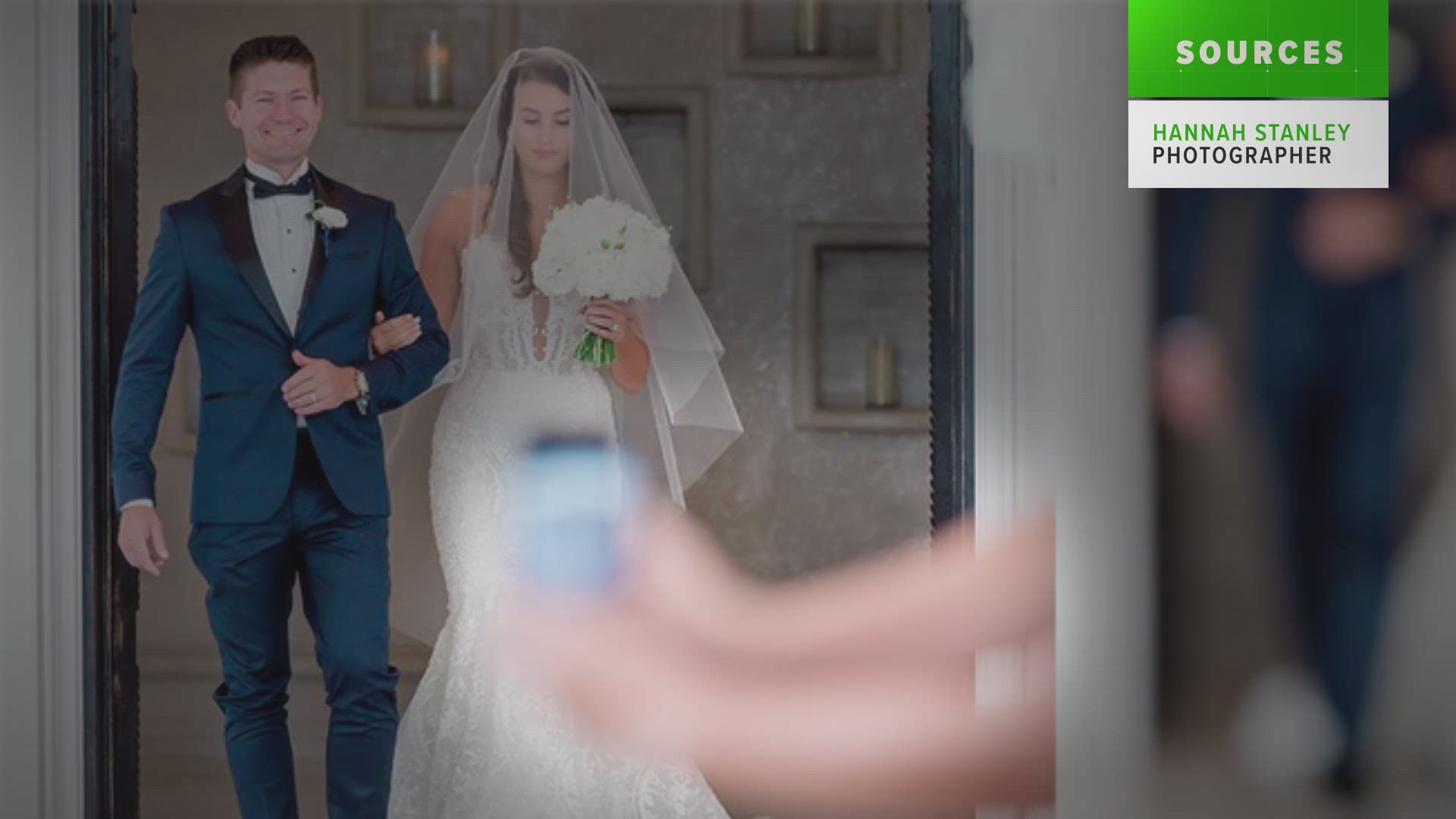 A viral post from a wedding photographer has a message to all wedding guests that's resonating with a lot of people online. It urges people to stop using your phones as cameras during weddings.

The post has two photos side-by-side that show the father of the bride walking his daughter down the aisle. Only problem? There’s a blurry hand holding an iPhone in the middle of the picture.

The post was made by photographer Hannah Stanley, a wedding photographer based outside Dallas, TX. She wrote a message to the "girl with the iPhone."

“Not only did you ruin my shot,” the post reads, “but you took this moment away from the groom, father of the bride, and the bride.”

She ends the message by asking all future wedding guests to turn off their phones, enjoy the event and let photographers like her do their job.

Her message must have resonated because it’s been shared more than 150,000 times and is the topic of articles and headlines across the web.

But, as the post has grown in popularity, so have claims calling it all fake.

“Has nobody noticed that the image on the phone is not the bride and groom? This is photoshopped,” one comment read. Another claimed that Stanley photoshopped the arm holding the phone into the picture to “pretend it’s a problem.”

Are these photos faked? Did photographer Hannah Stanley really edit these images to make it appear like she’d taken them at a wedding?

No. Multiple image searches and pixel-level tests of the images show that they haven't been doctored and are in fact original photographs. They didn’t come from other sources and originated on Stanley’s Facebook page.

Put simply, these photos are real.

We ran the images through four reverse image searches. Some of them specifically targeted the arm and phone elements from the pictures.

There were no results other than articles about this story.

That means the photos are original and weren’t taken from somewhere else.

And tests of the pixels of the photo all came back clear. There was no evidence that the images had been tampered with or altered.

VERIFY also reached out to Hannah Stanley herself. She sent a statement explaining that the photos were taken about one second apart and using a DSLR camera with a longer lens.

“These photos were taken 1 second apart from each other. When the doors opened, the bride and her dad were standing there, then the arm with the phone popped up in the aisle, I took the photo of the bride walking down with her dad, then I decided to focus on the lady’s phone for one shot. I then proceeded to move, and did get the perfect shot. I was using a Canon 135mm lens, so yes I was close, and with the iPhone, the camera is a much wider angle, so it would appear further away in the phone photo. This was NOT staged, this was a real moment, real-time. I just wanted to make a point that people need to relax, be in this once in a lifetime moment and enjoy it, not looking through a screen.

If you look closely at the photo focused on the phone, it’s the exact same shot. I did not stage it, did not photoshop it. This was real.”

The pictures do look a bit different, but it’s not due to editing. It’s just a result of how camera lenses work.

On a DSLR like Stanley used, the focus is more pronounced. If you’re focused on people further away, anything closer (like an arm and a phone) will be blurred and vice-versa.

If you look at the iPhone in the right picture, it does show the same scene. It’s just a wider angle because an iPhone can’t zoom in as far.

Bottom line, We can VERIFY these photos are real.