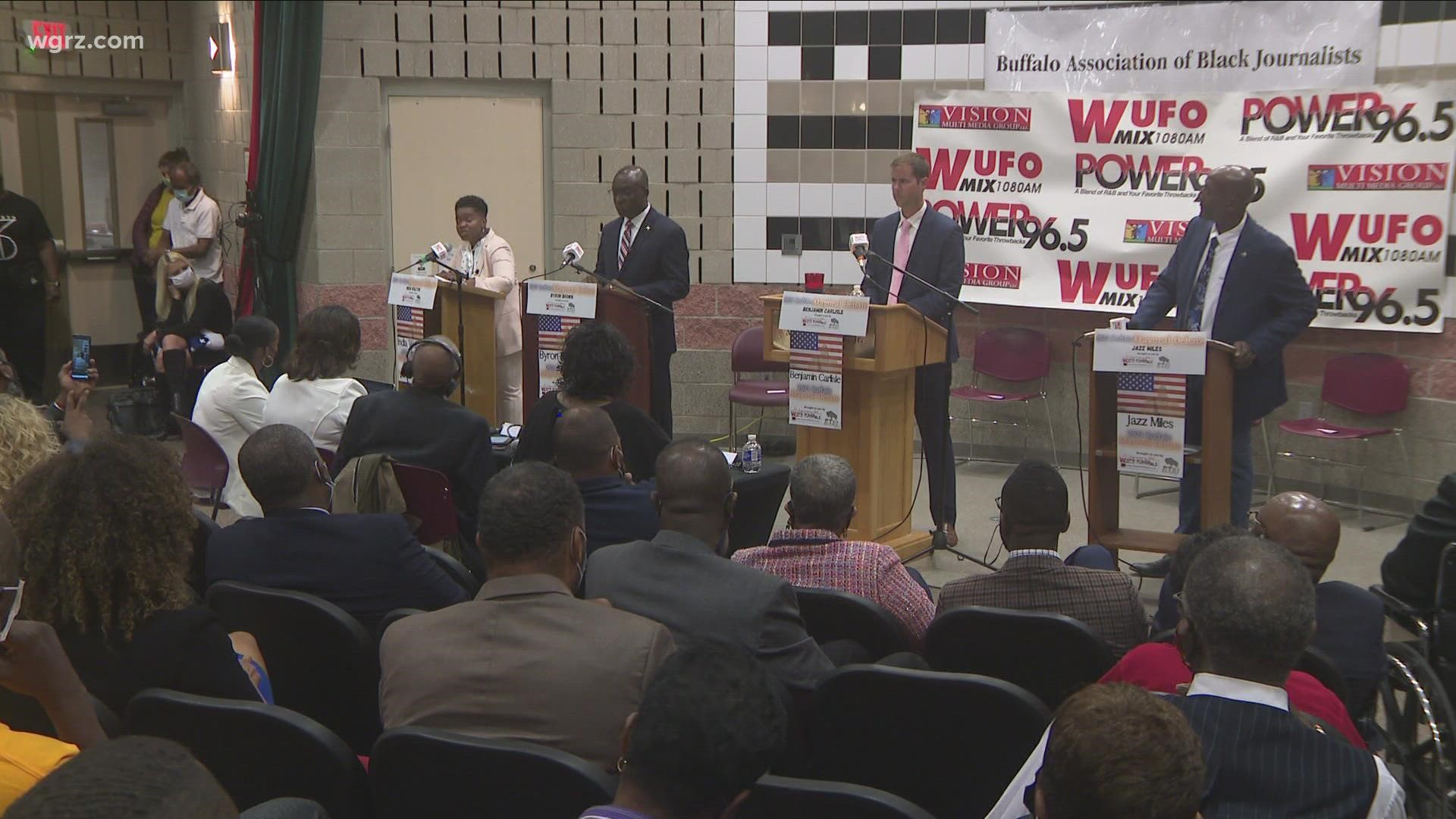 There are three main claims that we are able to Verify. Our sources are Jesse Myerson, the Communications Director for the India Walton campaign and Buffalo Police Benevolent Association President John Evans.

According to India Walton's Communications Director, Walton's campaign supports a study done by the Partnership for Public Good that shows more than $7.5 million could be cut. That figure could be as high as $16 million cut from the Buffalo Police budget.

Walton said this during last Thursday's mayoral debate, "The $7.5 million my opponent is referencing is from a very good study that was done by the partnership for public good that after a real audit of the police budget suggests that positions can be eliminated through attrition and the budget can be decreased by decreasing overtime and properly staffing the police department. That is not defunding, that is a responsible use of taxpayer dollars."

Another claim in the ad, Mayor Byron Brown says that if India Walton was mayor she would fire 100 police officers.

According to India Walton's communications director, Walton says she will not lay off a single Buffalo police officer, but instead encourage officers to retire.

Lastly, the ad claims that the Buffalo police department would have to lay off their youngest officers first?

Buffalo Police Benevolent Association President John Evans said based on police officer's contracts, those with the least seniority under any circumstances would be laid off first.

However, as was just previously stated, the Walton campaign says she has no intention of laying off police officers and will reduce staff through retirement.

“The homicide rate has risen five of the last six years in Byron Brown’s Buffalo,” said Walton. “To distract us from this abject failure, Brown is now lying about my comprehensive public safety program. I’ll say this much: if the FBI had raided my office and my longtime deputy mayor were cooperating in a federal political corruption investigation, I wouldn’t be so cavalier with the truth about law and order in Buffalo.”

In the ad, Brown claims that Walton’s support for reducing the Buffalo Police Department’s budget would mean firing one hundred police officers. This is completely false. The non-partisan Partnership for the Public Good has released materials (1, 2) showing how it would be possible to reduce the police budget by over $16 Million -- more than double the figure touted by Brown -- without a single layoff.

“My plan is to free police officers up to do the work we need them to do: investigate crimes,” Walton continued. “Under Byron Brown, they’re tasked with everything from mental health counseling to homelessness outreach. It is not fair to our law enforcement officials to ask them to solve every societal ill. They are trained for police work, and when I’m mayor, that is what they will do.”

The campaign additionally expressed concerns that Brown’s ad, which features active duty police officers standing on the steps of City Hall, may violate state and federal rules prohibiting the use of public resources for campaign purposes.

The Brown campaign responded to our VERIFY segment on Wednesday night. Here is the full response:

What qualifies the Walton campaign to verify the Brown campaign ad? Referring to a study does not lay out a plan. It is patently false that her proposed cut would not require laying off police officers. How will minimum manpower requirements be met if you simply reduce overtime? Encouraging police officers to retire is not a plan.

The contractual process for lay-offs is not “inconclusive.” Unless the Walton campaign is prepared to violate contracts and ignore collective-bargaining agreements, then the “last-in, first-out“ agreement applies.

If the Walton campaign says she has no intention of laying off police officers and will reduce staff through retirement, how exactly will she make this happen?

A response that talks about homicide rates or alleged investigations or freeing up police officers from their sworn responsibilities does not answer the questions asked and have nothing to do with the Brown campaign ad. She again cites a study, but does not in any way explain what she would actually do to cut 7.5 million dollars from the police budget. Because she can’t. Not without laying off police officers.

The campaign additionally expressed concerns that Brown’s ad, which features active duty police officers standing on the steps of City Hall, may violate state and federal rules prohibiting the use of public resources for campaign purposes.

The Brown for Buffalo campaign response to this absurd statement is: “If you don’t know what City Hall looks like, you aren’t qualified to be Mayor. That ad was not shot at City Hall.”

This is the latest campaign ad from @MayorByronBrown.
Are the claims he makes against @Indiawaltonbflo true?
We will VERIFY this coming up tonight at 11.@WGRZ pic.twitter.com/Dd5cQTzXjs