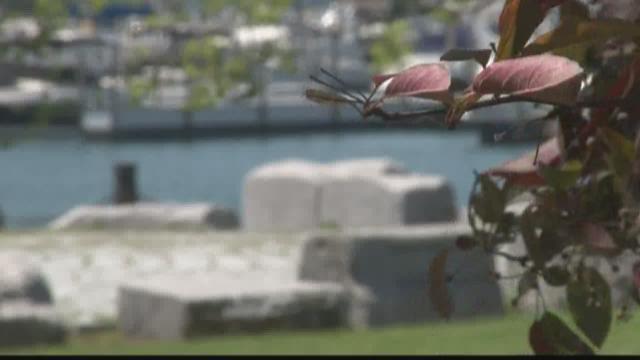 BUFFALO, N.Y. - You may have seen the signs, but have you ever actually wandered down to the Irish Famine Memorial?

It's tucked on the edge of the Erie Basin behind Templeton Landing, and this location is no accident.

Starting in 1845, the Buffalo waterfront is where many immigrants from Ireland landed as they escaped a horrible potato famine in their country that killed a million people.

Some of the Irish people who came to Buffalo started working in the steel and grain mills, and the monument is within sight of an old mill over the Skyway.

The monument itself is unique: the largest stone piece is actually from Ireland, but it's set off-center on purpose.

The well around the stone represents what's called "The Great Silence" when people were too traumatized to talk about the famine.

In the middle of the monument there are stones to remember the families affected by the famine, and there are 32 stones on the outside to represent Ireland's 32 counties.

There is also a message on the stone. Translated from Gaelic, it means, "If these were to keep silent, the very stones would cry out, Luke 19:40."

This August marks the 20th anniversary of the Irish Famine Memorial's dedication in Buffalo.

So the next time you come down to the waterfront, you might want to make a stop here to remember the lives lost.