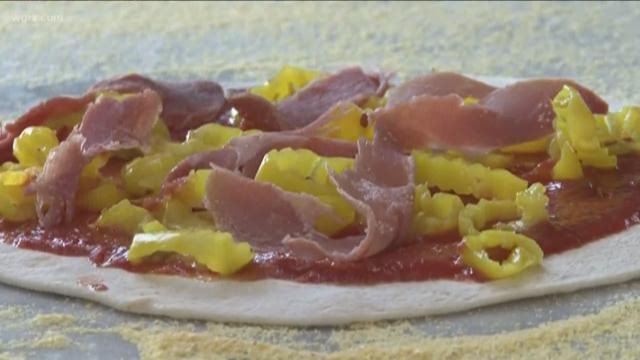 As the clock strikes lunch time and stomachs begin to growl, a mobile unit arrives on scene at a Tonawanda business complex. If anything can help the hunger, it is pizza!

"Everybody loves pizza," D.J. Perri, a Pizza Amore employee, said. "You can have pizza for breakfast, lunch, dinner, midnight snack."

Pizza Amore, the Grand Island family-owned business, is armed with all the necessities to appease appetites: they have hand crafted pizzas, made to order.

"Our most popular is our chicken wing," Perri explained. "It's shredded chicken with blue cheese and hot sauce and it just melts in your mouth."

They also have the "Godfather," which is like a meat lovers pizza with prosciutto, sausage, bacon, pepperoni and banana peppers.

Also on their menu is their Galbani Amore that won best pizza at Italian Fest a few years back.

"We use a pepperdoux pepper which is actually a sweet pepper that is spicy at the end," Perri said. "Not a lot of people are using pepperdouxs right now."

But it's not just the rare peppers or fresh ingredients that make Pizza Amore stand out.

It is the way they cook their pizza, too. Everything is wood-fired, even when it is made from one of their four trucks. (One of those trucks is a refurbished fire truck, by the way).

Pizza Amore said it is the only shop in Western New York with a wood fire oven on a food truck.

"With the wood fire, you're going to have a little bit of char on the outside and it's always going to be crispy," Perri explained. "You don't get really a smokey taste but you can tell there's a different taste compared to a gas oven when it's a little bit more doughy."

Pizza Amore has a standalone shop along the Boulevard in Grand Island. They also have those four food trucks. You can find where their food trucks are set up for the day by checking their Twitter or Facebook.