Friday morning, Shane Casado will be back in court where a judge will decide if he should return to jail. Since the Erie County District Attorney calls details from the bail hearing into question, 2 On Your Side requested a copy of the hearing transcript and found even more concerning details.
Author: Emily Lampa
Published: 6:10 PM EDT March 14, 2019
Updated: 6:10 PM EDT March 14, 2019

BUFFALO, N.Y. — 24-year-old Shane Casado is now free on bail. However, that could soon change, depending on the outcome of a bail revocation hearing on Friday.

It was just about three and a half months ago, at 10:30 p.m. on November 27, 2018, that 22-year-old Rachael Wierzbicki was shot and killed outside Casado's grandmother's home on Edson Street in Buffalo.

Since what was said at the bail hearing is now being called into question, 2 On Your Side requested a transcript of what was said in court.

The 13-page document shows the attorneys going back and forth over whether or not Casado is a flight risk or a risk to the community. It also gives more insight into what happened that night of the murder.

Greenman told Judge Michalski, Casado "...has never been violent in the past..." and "...given the aberrant nature of this act, I seriously do not believe that he is a risk of any danger to the community."

Morgan responded with more details from the scene, describing the victim as "unarmed":

As to Casado being a flight risk, the defense said he had family in the area and pointed specifically to the fact that the suspect's sister is married to a Buffalo City Police Officer:

We reached out to BPD to find out if they were aware of this arrangement. They were not.

Because of 2 On Your Side's inquiry, the department is now conducting an internal investigation of the matter.

In terms of Casado's employment, a major point of contention and perhaps the focus of this bail revocation hearing, the transcript shows defense attorneys explaining that Casado had worked with Community Services for Every1 up until his arrest. He was a manager of a group home, and Greenman said the agency contacted his law firm to say Casado's "job is still available."

The state raised concerns about this during the hearing:

The transcript shows the defense never outwardly told the judge that Casado would be working when he is released on bail, but DA Flynn said Thursday that the bail application does indicate that.

"We'll present that evidence that I have to the court tomorrow," added Flynn, "and ask the judge to reconsider and basically put him back in jail."

2 On Your Side confirmed with Community Services for Every1 that Casado is not working there now, nor do they have intentions of rehiring him.

We have heard from Casado lawyers who stand by what was presented in the bail hearing last week. They say they'll be able to prove that no false statements were made. 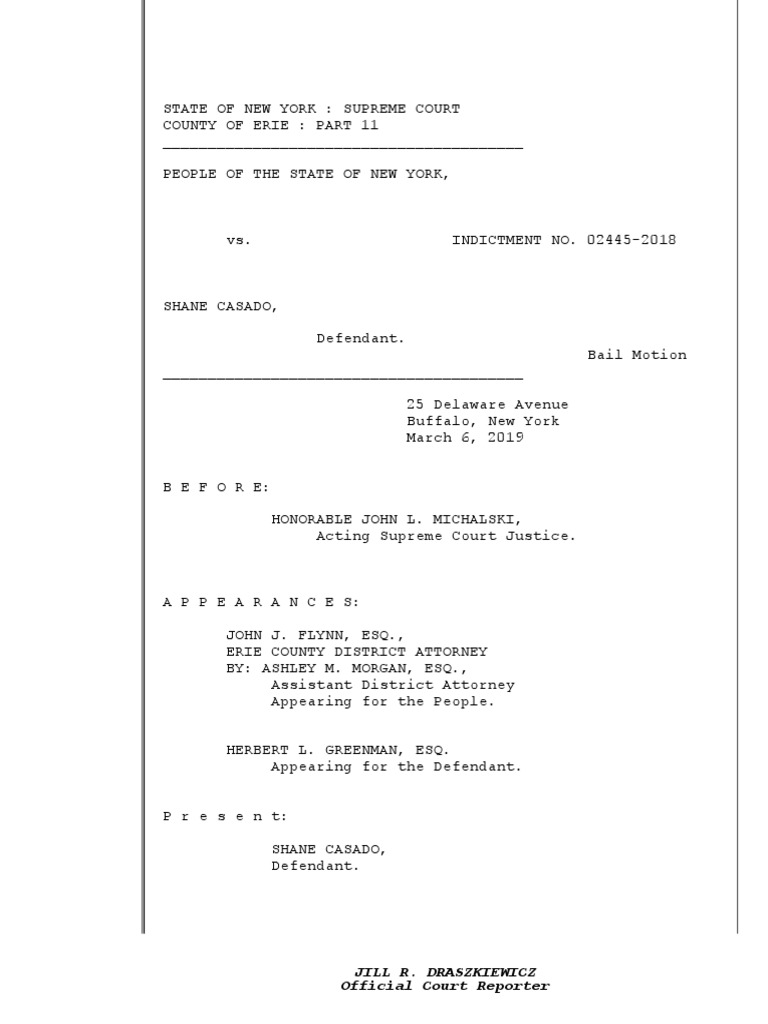 Shane Casado Bail Hearing Transcript | Judge | Bail
March 6, 2019 - The defense team of murder suspect, Shane Casado requested bail be set for their client. This document is a transcript of what was said by his attorney, a state prosecutor and the judge at that bail hearing.