2 On Your Side travels to Pittsburgh to see what Buffalo can learn from a city that's investing in new technology to improve citizens' commutes. 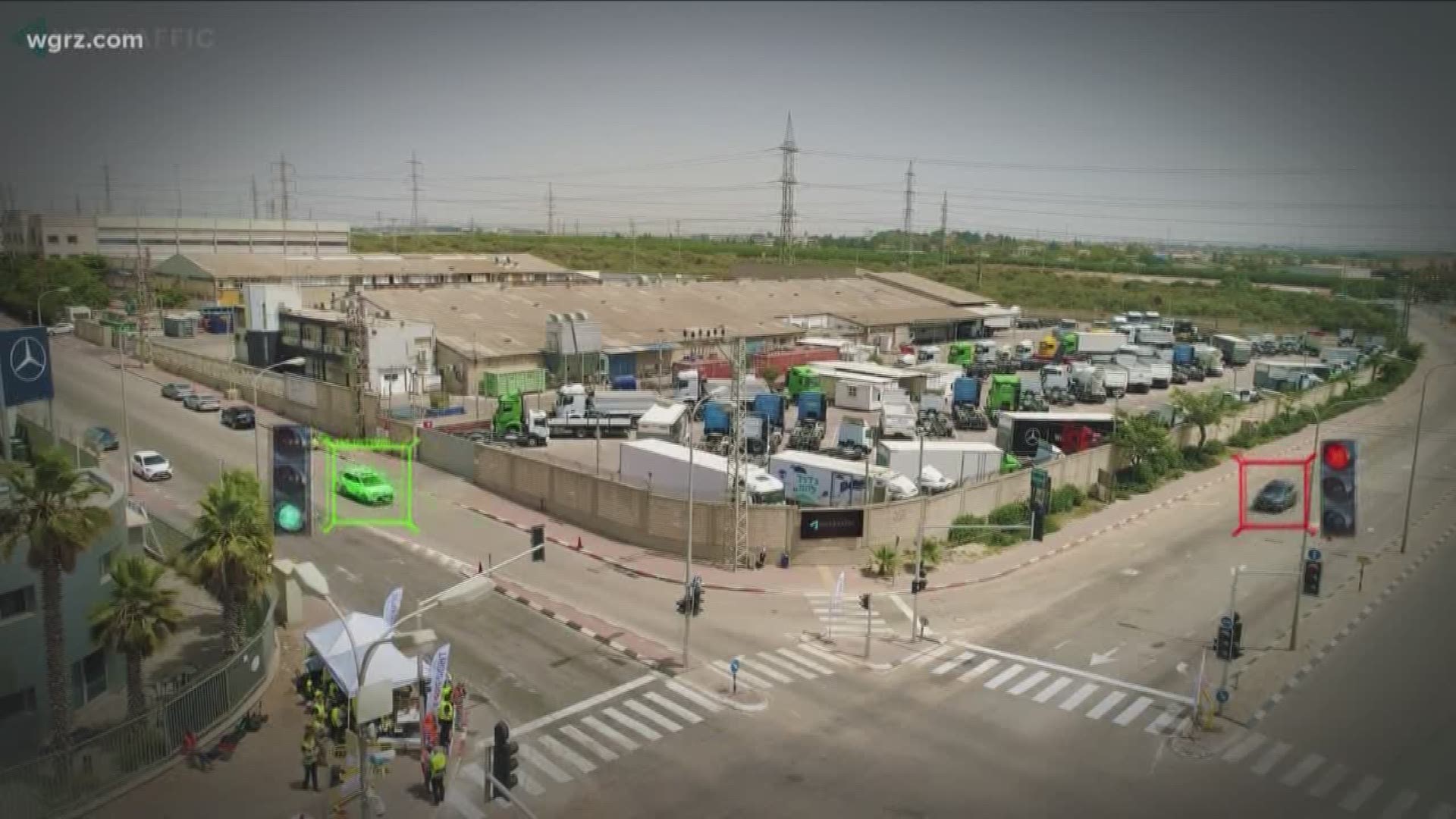 BUFFALO, N.Y. — Six years after a 2 On Your Side investigation found unsynchronized traffic signals along Delaware Avenue in Buffalo, the timing has gotten worse.

We drove the busy thoroughfare from Chippewa Street to Kenmore Avenue eight different times. The fastest we completed the trip was 17 minutes and 18 seconds. That's slower than the average trip during our tests in 2013, which took just under 16 and a half minutes.

During that quickest of the most recent tests, we were stopped (or stopping) 46 percent of the time, and got caught at 14 of the 26 signals.

2 On Your Side questioned City Engineer Michael Finn, who is the acting commissioner of public works.

"The best way to bring those (problems) to us is through our 3-1-1 system," Finn said, adding that his technicians will go out and look at any issues.

Some city streets in Buffalo have improved in recent years.

The signals are in sync along a stretch of Niagara Street, where a major reconstruction project was completed. It included new lighting, sidewalks and other streetscaping improvements.

The New York State Department of Transportation timed out the signals on Elm and Oak in Downtown Buffalo. They're in sync between the 33 and 190.

Despite some advancements, Buffalo is not using the latest technology to reduce commute times. 2 On Your Side traveled to Pittsburgh to see some of it in use.

"We want to make sure that the stops are reduced," said Amanda Purcell, a municipal traffic engineer in Pittsburgh. "Even if people are moving slowly, that's better than having to stop at every intersection."

She said Pittsburgh currently has 50 intersections on the Surtrac system, which was developed by Carnegie Mellon University. It uses artificial intelligence to improve traffic flows, and it has reduced wait times by as much as 42 percent.

Computer software takes all the data and creates an optimized plan for all the signals in an entire grid.

"Why has Pittsburgh made this a priority?" Michael Wooten asked Purcell.

"Because we want to do better," she replied. "We want to use the taxpayers' dollars better."

By the time it's done, Pittsburgh will have a couple hundred "smart" intersections, with most of the $25 million cost paid by federal grants.

Purcell says it's a public safety initiative, because mistimed lights fuel bad behavior behind the wheel.

"Aggressive driving is just not good for anybody, whether it's other drivers or pedestrians or cyclists that we have on the streets, so we want to reduce that," she said.

The state of Maryland is also in the midst of a "smart signal" project. The $50 million initiative will allow 700,000 drivers to reduce their travel times by up to 15 percent.

2 On Your Side talked with the project manager at NoTraffic, a tech startup that is working on the first city-wide smart traffic grid in Redlands, California.

"These smart sensors detect and interact with the presence of actual traffic," Kjeld Lindsted said. "So we understand where vehicles are waiting, where they are approaching the intersection and pedestrians, bikes, buses, regular vehicles, emergency vehicles, all these sorts of things."

NoTraffic's system is also designed for the future and is optimized to work with connected cars.

"What would be your message to city leaders in Buffalo on why this is a good investment?" Wooten asked Lindsted.

"The short message I want to convey to any city that is thinking about this technology is it doesn't have to be cost-prohibitive."

Purcell pointed out using new technology is a lot cheaper than trying to widen a road to accommodate more vehicles.

"Moving people has to be done smartly," she said.

A global traffic report from INRIX found the average driver in Buffalo paid an extra $1,009 due to congestion, and estimates have said about 10 percent of that is due to signals that aren't optimized.

There are 1,111,881 registered drivers in our 8-county region. Do the math, and "smart signals" could save up to $112 million per year in this region alone.

Rocky Moretti with TRIP, a national transportation research group, laid out the ways in which poorly timed signals cost drivers: lost productivity, fuel costs, wear and tear on vehicles and environmental costs, among others. He said using technology is a cost-effective way to help ease some of the congestion.

"When you look at the impact of mobility on a region's productivity, I think it's a bargain," Moretti said.

Finn, the acting public works commissioner in Buffalo, said the city is looking into technology that would connect intersections and share data to improve traffic flows; however, that would be part of a bigger project being worked on by the "Smart Cities Group," which wants to bring wireless connectivity to signals, police surveillance cameras, parking meters and other devices.

2 On Your Side has learned one community in Western New York will be using so-called "adaptive" or "smart" signals.

The Town of Tonawanda will use the technology at five intersections along Brighton Road. The signals will all coordinate with one another and even communicate with emergency vehicles.

App users: If you are having trouble seeing this map, click here.

WEB EXTRA: The Greater Buffalo Niagara Regional Transportation Council provided the following Q&A, which addresses some of the issues that come up with signals in Western New York, including ownership.

Why are there so many?

Like other issues associated with sprawl, as the region expanded its developed area, more roads, signals, etc were needed, resulting in more infrastructure to build and maintain, while needing to also maintain the existing infrastructure. Between 1970 and 2010, developed land in the region grew by 78 percent, while the population shrunk by 16 percent. We drove more too as we spread out, daily miles per person rose from 8.25 to 17.9.

Who owns and maintains the signals?

Why is that a challenge?

Different agencies and jurisdictions may have different signals and controllers (devices that contain the signal timings). Also longer streets and roads may go through several jurisdictions, making coordination of timing plans difficult.

Do signals ever get retimed?

Yes, jurisdictions often retime intersection signals based on local changes in traffic. Counts of traffic are needed and timing plans developed and installed. Some corridor wide retiming and synchronization have also been done, including Main Street, Elmwood, Sheridan, Clinton and others. Before and after studies showed real benefits. Challenges are that as land use changes, for example a new retail business or housing development occurs, traffic patterns change and the signal may not be optimal for the new traffic pattern. Retiming just one signal to accommodate traffic can hurt traffic progression in a corridor, you need to look at a bigger area.

Can all the signals just be retimed?

An aggressive program was proposed a few years ago to seek federal funding. Called Buffalo-Niagara Metropolitan Congestion and Energy Improvement Program, the project would have provided a comprehensive approach to congestion management, energy efficiency and emissions reduction in the Buffalo-Niagara region. Immediate actions were to retime traffic signals in several identified corridors, upgrade signal equipment throughout the region, and provide interconnect in priority corridors to safely and efficiently move autos and transit vehicles. Funds were requested in the former TIGER program in the amount of $38,734,000. The project would have provided a significant positive long-term outcome. Total savings to the metropolitan region were estimated at approximately $147 million per year, including savings in maintenance, user delay costs, accident costs, and fuel savings. The project was not selected for funding by USDOT however.

So what do we do now?

As noted, one of the biggest traffic signal challenges faced in the region is the variety of signal owners. A Regional Traffic Signal Committee was formed as part of the Niagara International Transportation Technology Coalition (NITTEC, the regional Traffic Management Center) to bring together different signal owners and help improve overall traffic flow, especially on roads that pass through multiple jurisdictions. This led to development of a Regional Traffic Signal Operations Program in 2018 which outlined traffic signal needs and priorities in the region. The goal of this project is to identify where traffic signal resources should be directed and how different groups can cooperate on signal projects. An example of some progressive approaches includes the Town of Tonawanda Smart Signal Corridor in 2019, where the Town is beginning a project to improve the traffic flow and safety at signalized intersections along Brighton Road by installing advanced traffic signal technology at several consecutive key intersections. In addition to coordinating the signals with one another, the technology will be able to communicate with emergency vehicles and public transit and respond accordingly.

What are the next steps?

In 2016, NITTEC received a $7.8 million grant from USDOT to develop projects in the region that could improve congestion, a portion of which will focus on improved traffic signal operations. Through this project, several high priority roadways will be identified and outfitted with technology to sync up the signals and allow for smarter signal operation. In 2019 GBNRTC approved a forward looking Metropolitan Transportation Plan, which included plans for Smartly Enhanced Mobility Arterials. These will incorporate new technology including real time traffic monitoring and communications between vehicles and the system to adjust to constantly changing traffic. In addition considerations for how traffic control would be handled when self-driving cars enter the picture would be incorporated. While there is a need to work in this area to retime signals now to satisfy the needs of the public, improve traffic flow and safety, it is also important to look forward and incorporate new technology to better manage the system and reduce costs to the taxpayer. Both approaches are being worked now.