At least eight people say, when they were children in the 1960's and 70's, they were sexually abused by Father Joseph Friel. 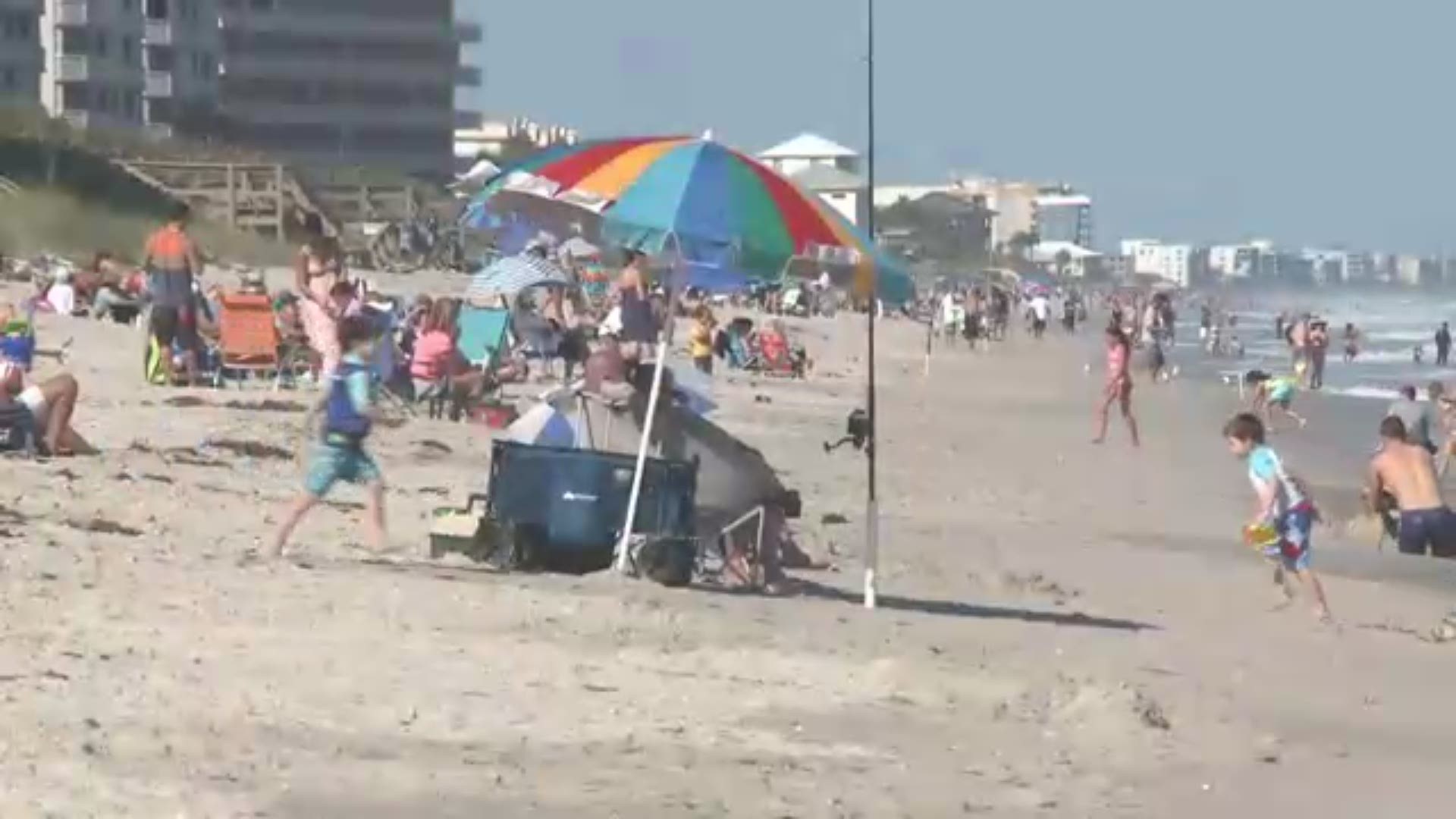 He didn’t think so. But now, he knows.

He is not the only child in the late 60’s who says they were sexually abused at the hands of Father Joseph Friel.

Szuflita’s encounters with Friel happened after the then-teenager had completed his elementary education at the parish school at Fourteen Holy Helpers in West Seneca.

He returned to attend religious instruction classes. That’s where Friel made his move, pulling Szuflita from class and leading him to the parish rectory.

Credit: WGRZ
"We were taught to respect priests and nuns," says Christopher Szuflita.

“It was in his own room, up the stairs,” recalled Szuflita, “I guess he played some music. I don’t remember if there was alcohol served but I remember smelling alcohol on him… and he tried to kiss me. Sat me on the bed and… and from there things progressed.”

After pausing, Szuflita continued, “And then it happened again.”

Maybe a half-dozen times Szuflita says he was sexually assaulted by Father Friel.

“We were told to respect not just adults, but priests and nuns. They were special. You just didn’t say, ‘no’.”

Eventually, Szuflita refused to go to religious instruction. When confronted by his parents, he told them.

“They probably didn’t believe me at first. My dad took me down to the rectory and that’s when we confronted Monsignor Ebner.”

The meeting with the pastor of the church did not go well. Szuflita remembers Ebner exploding in anger.

‘How could you say these things?’

Szuflita would run away from home twice resulting in having to take two years of high school classes to catch up for the time he missed.

By 1971, Friel was gone, moved to St. John the Evangelist parish in Buffalo. But for Friel the damage was done. It was damage he kept to himself for almost a quarter century.

Spurred on by isolated stories of priest sex abuse in the early 90’s, Szuflita filed a lawsuit against the Buffalo Catholic Diocese over the abuse he says he suffered at the hands of Father Friel.

The case quickly came apart because the statute of limitations has long since expired. Szuflita withdrew the lawsuit.

The chief legal counsel for the diocese back then is the same man who holds that post today, Terry Connors. In 1994, Connors assured parishioners and the public, “There have never been any similar allegations made against Father Friel.”

2 On-Your-Side has learned that statement today, is false. We have identified at least eight people who all say they were victimized by Father Friel when they were children.

MOVED OVER AND OVER

Joseph P. Friel died in 1995. A diocesan spokeswoman tells 2 On-Your-Side that in 1992 an illness prompted a move to revoke Friel’s privileges to function as a priest.

Over a 34 year career, Father Friel had 14 different assignments within the diocese. At seven of these, it appears Friel was at the post for only a year.

This kind of regular movement of a priest is a red flag says Judith Burns-Quinn, a spokeswoman for the Survivor Network of those Abused by Priests.

Credit: WGRZ
“Instead of taking care of the problem, they move the priest," says Judith Burns-Quinn, a spokesperson for SNAP.

It tells you if a priest gets in trouble, they move him. Instead of taking care of the problem, they move priests and they have done that for decades,” says Burns-Quinn.

The first movement of Friel in response to abuse of child appears to happened in the mid-60’s at Our Lady of Victory Basilica in Lackawanna.

2 On-Your-Side has spoken by phone with this accuser on multiple occasions. He has declined to interviewed or identified, but we have permission to share his story.

He tells us to this day, “Priests give me a creepy feeling.”

The incident happened at a mid-week service. Afterwards, he did what he did at every service when he was the altar boy, he went into the sacristy to put the hosts away.

No one else was around. It was just the then-6th grader and Father Friel.

We are told Friel grabbed the boy’s arm and kissed him on the cheek.

A struggled followed and the boy did the only thing he could think of, “I punched him as hard as I could.”

The blow his Friel’s mouth and he backed away bleeding from a split lip.

Credit: Butler Library - Buffalo State College
A man now in his 60's says in 1966, he fought off Father Friel in the sacristy of OLV.

The accuser immediately felt guilty, “I thought priests were like God.”

Friel responded by throwing some money on the floor and telling the boy to go buy himself an ice cream.

Instead, he left quickly and started the two block walk to home. Along the way he tried to convince himself the assault was his imagination.

When he arrived at home, his father was working in the garage. Dad sked, “What happened?”

The boy thought Friel had already called the house, so he told his father everything. Without a word the father went into the house, changed into his Sunday best outfit and drove to the church to talk with the monsignor.

Later, the father would return and tell the boy, “Father Friel won’t touch you again.”

The accuser says two weeks later Friel was transferred out of Our Lady of Victory.

According to diocesan records, Father Friel spent the next four years (1966-1970) at Fourteen Holy Helpers. It is one of the oldest churches in Western New York. At that time, it had a thriving elementary school.

At this location, is where Friel met Szuflita. It's also where me found other children. Altar boys were frequent targets.

“I was proud to be an altar boy. That was the thing to do,” said this Friel accuser who did not want his identity revealed.

To this man who still lives in Western New York, priests were actually above a parent in terms of authority.

“A priest was one step away from being Godly. And their word was final. Everything that they did or say was correct.”

Again, it was after a mass when this then-boy was alone with Friel in the vestibule.

Credit: WGRZ
“I’ve had to live with this shame for a really long time,” says John Doe, who says he was groped by Father Friel.

“Father Friel, I remember coming behind me hugging me close and started to tickle me and touching my private parts. I tried to get away. Told him I didn’t like it. Then maybe after a second or third occasion, he actually put his hands down inside my pants and touched my private parts.”

This accuser says he never caved in to Friel’s crude advances, always pushing the priest away. And he turned to the one person he thought could make the abuse stop, his mother.

“I told her a couple times. She slapped me across the face each and every time that I told her and said, ‘Priests don’t do that.’ “

That drove a wedge between mother and son. Instead of siding with her son, the woman told the boy to go back to church.

“She sent me right back into the Devil’s den.”

The fractured relationship between this accuser and his mother only worsened over the years.

The woman did not attend his wedding. She died without any attempts at reconciliation.

For Jill Jepson Kelechi, her abuse was suffered inside her own home.

Both her parents were active at Fourteen Holy Helpers.

And regularly, her parents would host cocktail parties in their partially finished basement.

Kelechi recalls, "People would sit around and tell jokes and drink and smoke. This was 19-60’s and they'd get dressed up (for these parties).”

The family kept the liqueur Galliano on hand because when Father Friel showed-up at the parties, he favored Harvey Wallbangers. 2 On-Your-Side is told Friel would drink heavily.

At the time, Kelechi was about 11-years-old. She and her brother would be sent to bed while the adults partied downstairs.

She says Friel was a frequent visitor. At first, Kelechi says, the priest wouold just open the door and stare. But eventually, he'd move in closer and closer.

Then, Father Friel would climb on top of her.

"He would kiss my neck. He was rubbing himself. He was getting off by… by being on me. I would just freeze. I just laid there until he’d go away.”

Later, to avoid Friel, Kelechi would dive under bed and hide when she heard a party-goer coming up the stairs.

To this day, she still can see the priest standing outside her door, "I do have flashes of him. I constantly see that silhouette in the doorway.”

We do not know their names, but there are three additional accusers from the Fourteen Holy Helpers parish.

That comes from attorney Mike Reck, who represents them.

Reck says the time of the alleged abuse, the accusers were between the ages of 12 to 14. They all still call New York State home. They are all males. The three were also altar boys at the church.

“The abuse fits the pattern of conduct that we’ve come to know about Father Friel which is really a pattern of access and exploitation,” says Reck.

Reck has spent 15 years working on sex abuse cases against various Catholic dioceses around the country. In a recent interview, he likened Father Friel to a shark.

“A shark has no impulse control. A shark will eat fish. That’s how we view Father Friel. For whatever reason he had the defect. The problem is diocesan officials put the shark in the swimming pool with the kids and they did it again… and again… and again,” says Reck.

According to diocesan directories, Father Friel landed at St. Patrick’s in the Cattaraugus County town of Randolph in 1977. This was Friel’s fourth different assignment in five years.

Bishop Edward Head made Friel pastor of the parish. The title comes with more authority.

This is where an eighth accuser says they were abused.

The person is represented by Boston attorney Mitchell Garabedian. In December, Garabedian put out a news release listing 13 victims offered settlements from the Buffalo Diocese.

Credit: WGRZ
Accuser #8 says he was abused by Friel at St. Patrick's in Randolph. The Diocese has made a settlement offer.

The victims were numbered on the release. The information on Victim #4 included that this person was abused in 1978 and 1979. The abuse took place when the victim was 14 and 15 years old.

Details of the settlement offer were not disclosed.

That’s eight people from three different parishes who all say they were abused by a Diocesan priest, Father Joseph Friel.

He thinks about how his life might be different today if he’d never met Father Friel.

And he questions why the Diocese did not to more to protect him… and the other children.

“The people before me, the people after me, this all could have been prevented if they would addressed it back in the day. That, I know.”

-Below Investigative Reporter Steve Brown writes about his "day trips to Hell" while digging into this story of a deceased priest accused of being a serial abuser of children.