Dr. Dennis DePerro believes the Bishop's handling of the scandals hasn't worked and he needs to step down 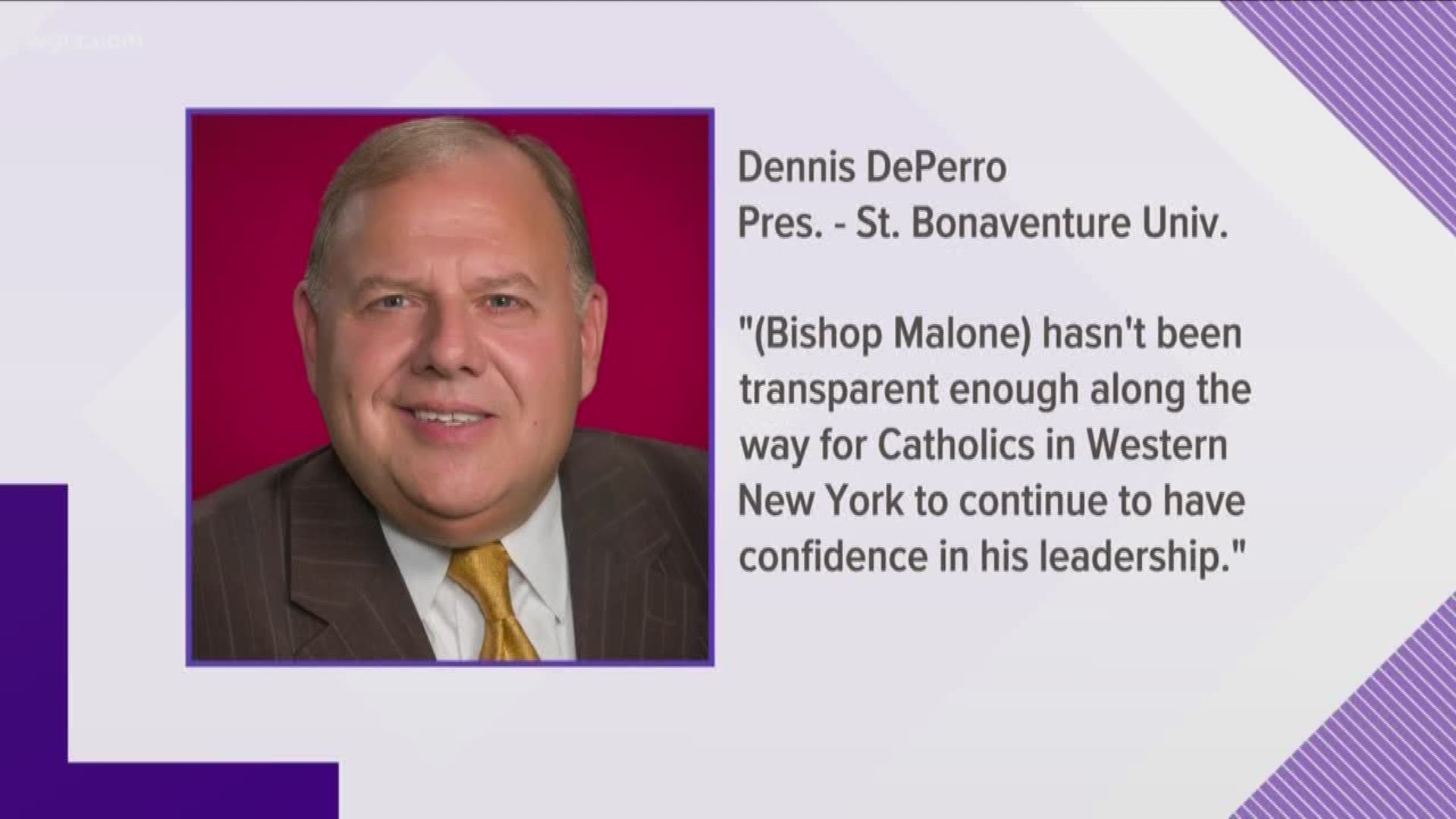 BUFFALO, N.Y. — 2 On Your side has confirmed that the president from St. Bonaventure University is calling on Bishop Richard Malone to resign.

Dr. Dennis DePerro believes the Bishop's handling of the scandals hasn't worked and he needs to step down.

More than 80 priests within the Buffalo Catholic Diocese have been accused of sexual abuse.

“No organization in today’s world — including the Catholic Church — is exempt from accountability. I believe that a good leader would recognize that moment and step down.

“I truly believe Bishop Malone is a good person spiritually and he’s always been a staunch supporter of Catholic education, to which I’ve devoted my life. But the reality is that we’re not healing. We’re not restoring trust. As these reports continue to surface through the media and not from the Diocese, that trust continues to erode and victims have to relive, time and time again, the trauma they endured.

“I recognize that Bishop Malone inherited much of this crisis, but he hasn’t been transparent enough along the way for Catholics in Western New York to continue to have confidence in his leadership.

“I admire his unflinching desire to repair the damage this crisis has caused, but sometimes, the most courageous thing a man can do is to step aside and recognize that his voice is no longer being heard and that he’s standing in the way of creating true resolution.”

Last month, Bishop Malone was forced to skip the Buffalo St. Patrick Day parade because of calls for him to resign.

There is also reaction tonight from the presidents of two other Catholic institutions, Canisius College and Niagara University.

A spokesman from Niagara tells 2 On-Your-Side "Father (James) Maher choose not to comment at this time."

Canisius President John Hurley is more supportive of Malone saying the Bishop and the diocese have been constructively engaged in a conversation about a series of reforms which would give non-clergy members of the church greater say.

And late Friday afternoon, Bishop Malone has responded to Dr. DePerro's call for him to resign, saying he is, "disappointed and dismayed."

“Bishop Malone is disappointed and dismayed with the comments of Dr. DePerro.  We suspect that Dr. DePerro has not fully studied the carefully developed and well-publicized protocols of the Diocese of Buffalo.  For example, the name of Fr. Gervase White, OFM, a beloved member of the St. Bonaventure community, was improperly revealed on television even though the allegation against him does not involve child abuse and cannot be investigated because Fr. Gervase died 17 years ago.  Following established protocols, the diocese intentionally did not publicize that allegation.  The bishop has received helpful input from others, including the President of Canisius College and other members of the Movement to Restore Trust, on how diocesan procedures might be improved.  The bishop would have welcomed and still would accept such input from Dr. DePerro, but to criticize the bishop for following established protocols is unjust.”