A local, retired priest has admitted to sexually abusing dozens of boys. 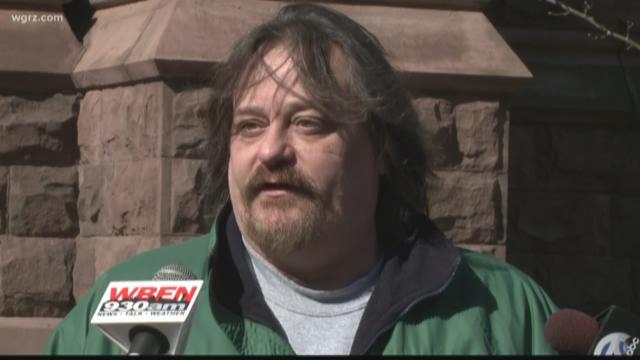 BUFFALO, NY - A retired priest from Western New York has admitted to The Buffalo News that he sexually abused dozens of boys.

Reverend Norbert Orsolits told the paper the sexual encounters with teenage boys occurred during the 1970s and '80s.

He admitted to what he did after a South Buffalo man said he abused him four decades ago, roughly around the year 1980. When 2 On Your Side reached him by phone on Wednesday evening, Orsolits refused to answer any questions and referred all inquiries to the Diocese of Buffalo. When asked if he felt remorse for the abuse he admitted to in The Buffalo News, Orsolits would not answer the question.

Orsolits' behavior came to light on Tuesday, when 52-year-old Michael Whalen gave the following account to reporters in Buffalo: "He took me up to his cabin in Springville where the abuse took place. He got me out there on the means of going skiing at Kissing Bridge. And I just want everyone to know that this means a lot to me and to my family and if there's any other victims of Father Norb, to step forward."

Orsolits did not specifically recall Whalen in his interview with the newspaper, but he did not deny abusing him. He also told The Buffalo News he was sent to Canada for treatment at one point.

The Catholic Diocese removed Orsolits from ministry in 2003, a spokesperson confirmed.

"Since 1990, the Diocese of Buffalo has had policies to address sexual abuse. Every complaint that we receive is addressed pursuant to a protocol that is designed both to protect children and to respond to victims. We will have more to say about these important issues later this week. We will not comment on these particular complaints except to note that Fr. Norbert Orsolits was removed from ministry in 2003 and that Fr. Robert Conlin died in 1997.”

Whalen's attorney is Mitchell Garabedian, who was instrumental in representing victims of abuse in Boston. He was portrayed in the movie "Spotlight" for his role in those landmark cases.

In a phone interview from his Boston office, Garabedian told 2 On Your Side that the Diocese of Buffalo orchestrated a "cover-up."

"The Diocese of Buffalo has shown us they practice secrecy, just like the rest of the Catholic Church when it comes to abuse. It was swept under the rug, kept quiet and revealed to no one... the sexual abuse was revealed to no one outside of the Catholic Church," Garabedian said. "That's an amoral position to take and it should be corrected immediately."

On Wednesday, Kaleida Health also confirmed that Father Orsolits was assigned to Buffalo General Medical Center from 1990 to 2003. A spokesperson released the following statement:

"Fr. Orsolits was a part-time volunteer that was assigned to us by the Diocese back in 1990. He left in 2003, 15 years ago. We were not made aware of any of his previous issues that may have been known by the Diocese at that time, nor are we aware of any complaints against him during his time at Buffalo General Medical Center. We will continue to investigate the matter moving forward."