A middle-of-the-night fire swept a boat carrying recreational scuba divers anchored near an island off the Southern California coast early Monday, leaving at least 25 dead and nine others missing.

Coast Guard Lt. Cmdr Matthew Kroll said Monday night that 25 people had died. Five of six crew members on the Conception escaped by jumping into an inflatable boat they steered to a nearby vessel.

Rescuers initially recovered four bodies about 90 miles (145 kilometers) northwest of Los Angeles just off Santa Cruz Island, and 16 others were pulled from the water later in the day. The Coast Guard says five others have been found but not recovered due to unsafe conditions under the boat, which sank about 20 yards (18 meters) from shore.

Authorities will search for the nine people still unaccounted for through the night.

"We should all be prepared to move into the worst outcome," Coast Guard Capt. Monica Rochester said at a news conference. 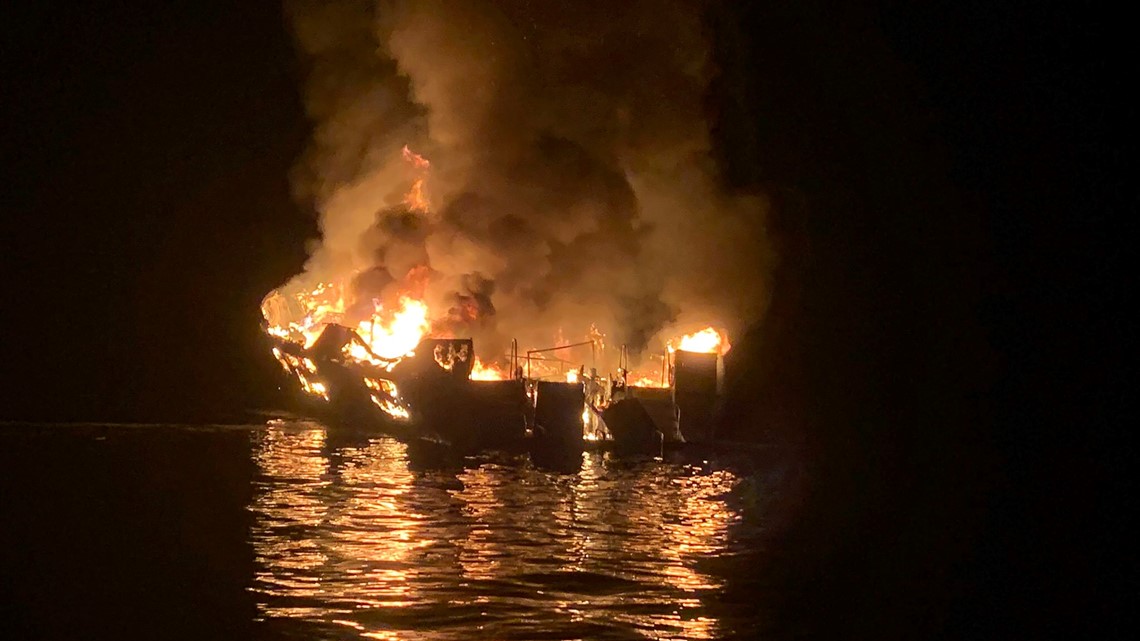 It wasn't immediately clear when the bodies on the ocean floor might be retrieved or when divers could search the boat for others.

"It's upside down in relatively shallow water with receding tides that are moving it around," Santa Barbara County Sheriff Bill Brown said. Investigators have not yet determined a cause for the fire.

The 75-foot (23 meters) Conception was on a three-day excursion to the chain of rugged, wind-swept isles that form Channel Islands National Park in the Pacific Ocean. The fire broke out around 3 a.m. in Platt's Harbor off Santa Cruz Island.

The five crew members who escaped took refuge on a boat called The Grape Escape that was anchored nearby. Two had minor injuries, Coast Guard Petty Officer Mark Barney said.

The Grape Escape's owners, Bob and Shirley Hansen, told The New York Times they were asleep when they heard pounding on the side of their 60-foot (18-meter) fishing vessel about 3:30 a.m. and discovered the frightened crew members. They told the couple they fled when the fire grew out of control.

"When we looked out, the other boat was totally engulfed in flames, from stem to stern," Hansen said, estimating it was no more than 100 yards (91 meters) from his craft. "I could see the fire coming through holes on the side of the boat. There were these explosions every few beats. You can't prepare yourself for that. It was horrendous.

"The fire was too big, there was absolutely nothing we could do," he added.

Hansen said two of the crew members went back toward the Conception looking for survivors but found no one. Asked at a news conference if the crew tried to help others aboard, Rochester told reporters, "I don't have any additional information."

The Conception, based in Santa Barbara Harbor on the mainland, was owned by Truth Aquatics, a Santa Barbara-based company founded in 1974. Dave Reid, who runs an underwater camera manufacturing business with his wife, Terry Schuller, and has traveled on the Conception and two other boats in Truth Aquatics' fleet, said he considered all three among the best and safest.

"When you see the boats they are always immaculate," he said. "I wouldn't hesitate at all to go on one again. Of all the boat companies, that would be one of the ones I wouldn't think this would happen to."

His wife said Truth Aquatics crews have always been meticulous in going over safety instructions at the beginning of every trip she's been on.

"They tell you where the life jackets are, how to put them on, the points of egress, the exits, where the fire extinguishers are, on every single trip," said Schuller, who goes on diving expeditions often with her husband. "They are the best, the absolute best."

Both said the sleeping area is comfortable but small, however, with bunk beds stacked next to one another in a tight space on the vessel's lowest deck. Coming up to the top deck to get off requires navigating a narrow stairway with only one exit. If the fire was fast-moving, Reid said, it's very likely divers couldn't escape and the crew couldn't get to them.

"If there was an explosion in the engine area that could have gone right into the sleeping area," Reid said.

The Conception was on the final day of a Labor Day weekend cruise when the fire erupted and a mayday call was made. Rochester said that call indicated the boat was already fully ablaze.

After hearing the call, Capt. Paul Amaral of the vessel assistance company TowBoatUS said a boat sped from Ventura Harbor some 30 miles (48 kilometers) to the island.

"We launched that boat knowing that the vessel was on fire, lots of people aboard," he told The Associated Press.

A Coast Guard helicopter and a fireboat were on scene when he arrived around 5 a.m. He first searched the water and shoreline, then turned back to the Conception, which was going aground.

Amaral said he attached a line and pulled it into deeper water where fireboats could reach.

Brown said the elements of the tragedy were daunting for rescuers: The boat was in a remote location with limited firefighting capabilities, passengers were sleeping below deck in the middle of the night and there was a quick-moving fire.

"You couldn't ask for a worse situation," the sheriff said.

The Conception was chartered by Worldwide Diving Adventures, which says on its website that it has been taking divers on such expeditions since the 1970s.

A 2016 inspection resulted in owners replacing the heat detector in the galley and one in 2014 cited a leaky fire hose.

Records show all safety violations from the last five years were quickly addressed by the boat's owners.

The Channel Islands draw boaters, divers and hikers. Five of the eight Channel Islands comprise the national park and Santa Cruz is the largest within the park at about 96 square miles (248.6 square kilometers).

A memorial outside Truth Aquatics in the Santa Barbara Harbor grew Monday night as mourners came to pay their respects.

JJ Lambert, 38, and his fiancée, Jenna Marsala, 33, of Santa Barbara, brought a red and white dive flag to the memorial. Lambert said he'd been on The Conception as a young diver.

Daniel Butts, 55, and his wife, Lisa Olsen, 54, said they saw The Conception getting loaded on Friday night during one of their regular walks around the Santa Barbara harbor.

Butts said six or eight people were loading diving gear onto the boat as they chatted among themselves. The couple brought a bouquet of flowers on Monday evening to add to a growing memorial on the dock.

"We probably saw a few of the people that vanished in that fire," Butts said. "Everybody who has a flag should be at half-mast in the harbor."

Orlando Aldana, 42, of Santa Barbara, bought 34 candles to the memorial.

"I saw the flowers earlier when I here and I just felt like, 'Well, it's reaching nighttime,'" he said. "This is what us Latinos do, we light candles for our dead."