Lawmakers are calling for the passage of the Child Victims Act in light of the recent Nichols investigation. 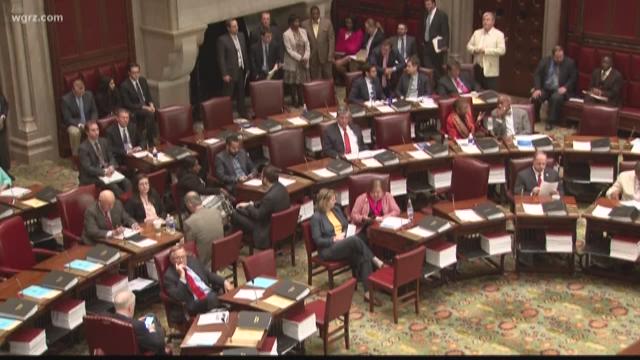 BUFFALO, NY -- When a report revealed students were involved in inappropriate relationships with teachers at a prestigious local private school, it renewed the call for passage of the Child Victims Act.

Supporters of the act say it's about accountability. If passed, it would make it easier for child sex abuse victims to seek justice as adults.

The recent revelation about the dirty open secret of teachers having inappropriate, and in some cases, sexual relationships with students at Nichols school is a more pressing reason why one lawmaker, and the District Attorney, think the Child Victims Act needs to be a law.

"...allow them to hold their abusers, once and for all, accountable to the law," said Senator Tim Kennedy.

The hold up is in the NYS Senate. Democrats support it, but Republicans control the majority and haven't brought it to the floor for a vote.

It's been over a decade.

2 On Your Side's Claudine Ewing reached out to the Chair of the Codes Committee, where the bill is still stalled. She also sent an email requesting an interview with Senator Lanza.

So far, nothing from the Senator from Staten Island.

And on his committee is one member from WNY: Republican Patrick Gallivan, who said, “I certainly support doing everything necessary to prevent the sexual victimization of children. In addition to the work the Senate has already advanced toward that end, I co-sponsor legislation S4809, extending the criminal and civil statutes of limitation in these matters. I will continue to work with my Senate colleagues in an effort to pursue comprehensive and meaningful reform."

So what would the Child Victims Act do?

It would increase the criminal and civil statute of limitations, and create a one-year look-back window to allow survivors over the age of 23 to seek retrospective civil relief.

"I suspect that the major hold up on why this hasn't been passed, is on the civil end of it - because there's money involved," said Erie County District Attorney John Flynn.

"For one year from the date of the passage being signed into law, individuals that have been abused as children will have the ability to go back retroactively and prosecute, on a civil and criminal level, their abusers."