Local prosecutors asking for the goods on Cuomo

Prosecutors are taking Attorney General up on an offer to share information gleaned from a 5-month-long probe that concluded Cuomo sexually harassed several women. 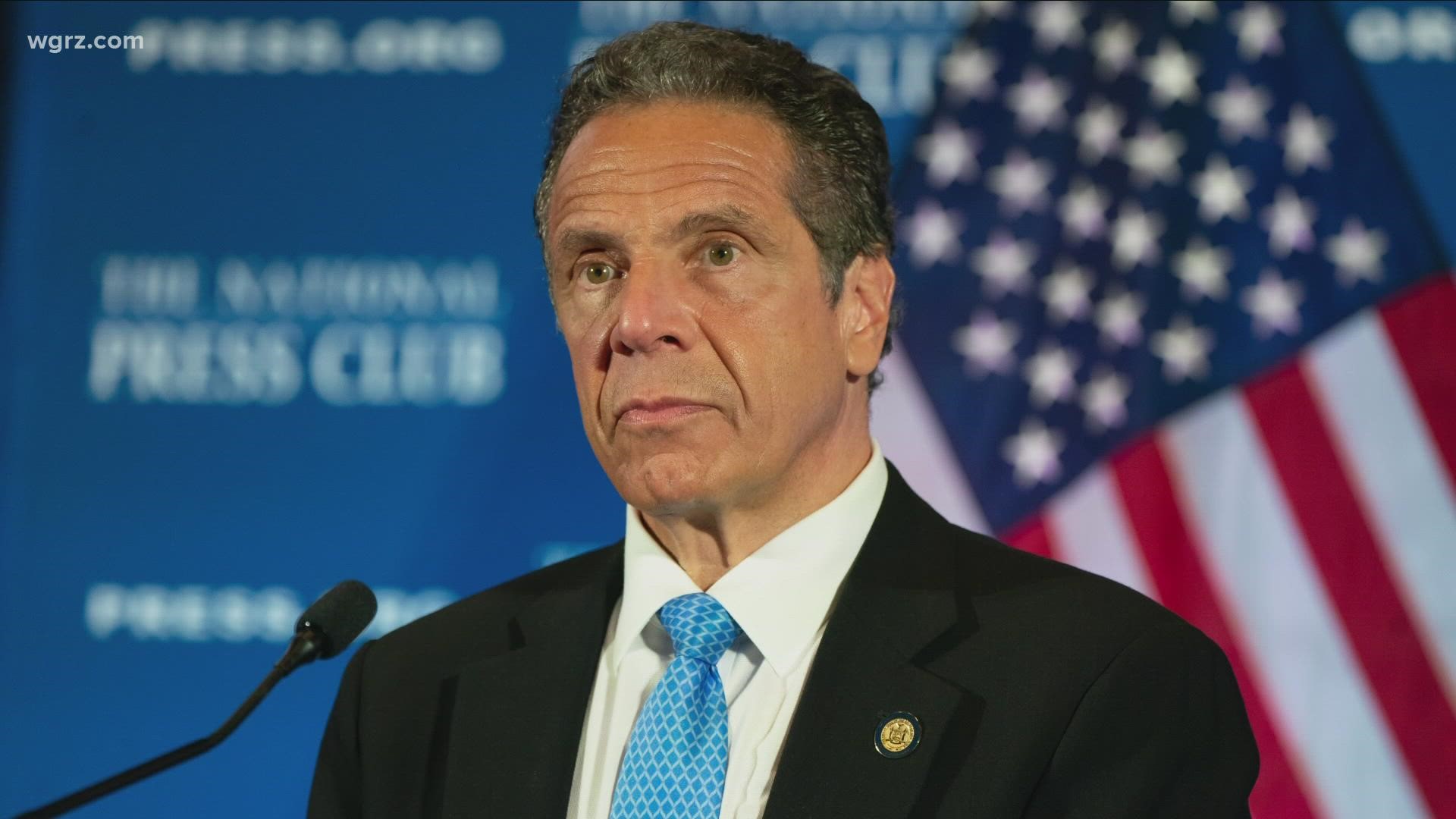 BUFFALO, N.Y. — When New York State Attorney General Letitia James announced the results of an independent investigation on Tuesday, which concluded that Gov. Andrew Cuomo engaged in a pattern of sexual harassment against 11 women, she noted that, from her end, the matters involving Cuomo are of a "civil nature with no criminal consequences."

However, she added that she would readily share information with any local police departments or prosecutors if they sought to open a criminal against the governor.

It didn't take long for prosecutors in several counties to take her up on the offer.

On Wednesday, district attorneys in three counties (New York, Westchester, and Nassau) made known that they were interested in obtaining information from the Attorney General's office. The Albany County District Attorney announced his intent to review the investigative materials on Tuesday.

The interest of those prosecutors lays in the allegations that Cuomo engaged in incidents of unwanted hugging, kissing, and groping of women in various parts of the state.

"As some of the governor’s conduct described in the report occurred in Westchester County, we have formally requested investigative materials obtained by the Attorney General’s office," Westchester County District Attorney Miriam E. Rochah said in a statement.

Rochah's interest could be related to one of Cuomo's accusers, who is a New York State Trooper assigned to his personal security unit (PSU) and who, according to the report, described the governor's behavior toward her after she joined the PSU as "generally flirtatious and creepy."

In the AG’s report, one of the women interviewed and who reported harassing behavior by #Cuomo said some of it occurred outside his home in Mount Kisco where she, as a NY State trooper, was part of his security detail. Mount Kisco is in Westchester https://t.co/yCC07UXQVz

Investigators say the trooper, who was was in her late 20s, met Cuomo at an event to which she was assigned at the RFK Bridge. The report concludes that not long after the governor encountered her, he and members of his office directed that she become a member of the PSU despite her not having the necessary years of service to qualify for that detail.

According to the Attorney General's report, Cuomo, while speaking to investigators, was asked about his involvement in the trooper's transfer the personal security unit.

"The governor recited several times that he 'was on constant alert to recruit more women, Blacks, and Asians to the state police detail. He stated that he recalled meeting two women who were Troopers, including Trooper #1, at the RFK Bridge event, and that he encouraged the State Police to talk to both. He testified that he was not, at any point, aware of any minimum requirements for serving on the PSU, although he noted that if there were any such requirements, he would not support them because they would interfere with the need for greater diversity in the PSU."

The trooper, who then became part of the unit that protects the governor, described to investigators incidents which occurred on two occasions at his former residence in Mt. Kisco, Westchester County.

In one incident she said the governor invited her inside for a private tour of his home.

In another incident, according to the report, "Trooper #1 was stationed outside the Mt. Kisco residence and approached the Governor in the driveway to ask if he needed anything. At this point, the Governor responded, 'Can I kiss you?' Trooper #1 testified, 'I remember just freezing, being—in the back of my head, I’m like, oh, how do I say no politely because in my head if I said no, he’s going to take it out on the detail. And now I’m on the bad list.' Unsure what to do, she replied, 'Sure.' The Governor then proceeded to kiss Trooper #1 on the cheek and said something to the effect of, 'Oh, I’m not supposed to do that,' or 'unless that’s against the rules.'

According to the trooper's testimony, incidents of unwanted touching involving the governor occurred when she was in an elevator with him in Manhattan and he allegedly ran his finger down her spine, and at an event at Belmont raceway in Nassau County.

On the later occasion, she described how Cuomo, while she held a door for him as he walked past her, "ran the palm of his left hand across her stomach in the direction opposite the direction that he was walking. The center of the Governor’s hand was on Trooper #1’s belly button, and he pushed his hand back to her right hip where she kept her gun. A Senior Investigator (Senior Investigator #2) who was walking behind the Governor saw the Governor touch Trooper #1 in the stomach, and a number of PSU members recalled hearing about this incident from Trooper #1 after it happened.

"In her testimony, Trooper #1 described the way in which the Governor touched her stomach as follows: 'I felt ... the palm of his hand on my bellybutton and ... pushed back toward my right hip where my gun is ... I would say [the bellybutton] was probably in ... the center of his palm.' The conduct made Trooper #1 feel 'completely violated because to me, like that’s between my chest and my privates.' Although she was upset by the conduct, Trooper #1 did not feel she could do anything about it, explaining, 'I felt completely violated. But, you know, I’m here to do a job.' ”

When asked about this by investigators, according to the report, Cuomo responded by saying "that he does recall hugging Trooper #1 and said that he may have kissed her on the cheek at a Christmas party. However, he denied that he has ever purposely touched Trooper #1 on her stomach or run his fingers down Trooper #1’s back."

Why the trooper finally spoke out

According to the report, "Trooper #1 told us that, even now, she remains fearful of speaking out about her experiences with the Governor. She said, I feel like they [PSU leadership] don’t even want to ask because nobody wants to be in the line of fire of the Governor. Everyone knows he’s very vindictive. ... I’m nervous that the Governor’s going to know I spoke out, and I’m going to be retaliated against, you know. ... And everybody, for the most part, gets promoted because they’re in the good graces of the Governor. So if they stay quiet or give him information, they’ll get promoted, or something good will happen to them. That’s just like the culture again in PSU.' She also explained that she was worried about 'exposing myself and ... my privacy.' However, she ultimately decided to speak out because 'at the end of the day, if I could help validate these women, I think that’s more important than ... my own, you know, personal life."

The three district attorneys in Westchester, New York, and Nassau counties who announced their intent to seek more information and investigative materials from the state Attorney General on Wednesday joined Albany County District Attorney David Soares, who announced his intent to do so Tuesday night.

Soares said his office was already conducting his own investigation into allegations by a former Cuomo aide that the governor grabbed her, reached up her blouse, and groped her breast during an encounter inside the Governor's Mansion in downtown Albany.

"It's our understanding that for the young woman whose breast was groped, the Albany Police Department already has a report about that," said Anne L. Clark, an attorney who was one of the independent investigators who worked with the Attorney General's office to produce the report.

"As the attorney general stated, all the information is documented in the report, and any prosecutors or police departments can look at the evidence and determine if they wanted to take further action.

"It's very seldom that prosecutors can can conduct investigations and actually have the opportunity to speak with targets of those investigations," Soares told NBC's Lester Holt, while noting his desire to review "all the evidence that the Attorney General was privileged to."

This would include all the statements made by Cuomo during his 11-hour questioning by investigators, during which he time he denied the griping incident occurred.