No, there isn't going to be a 'second inauguration' for Donald Trump this summer and you can't buy tickets 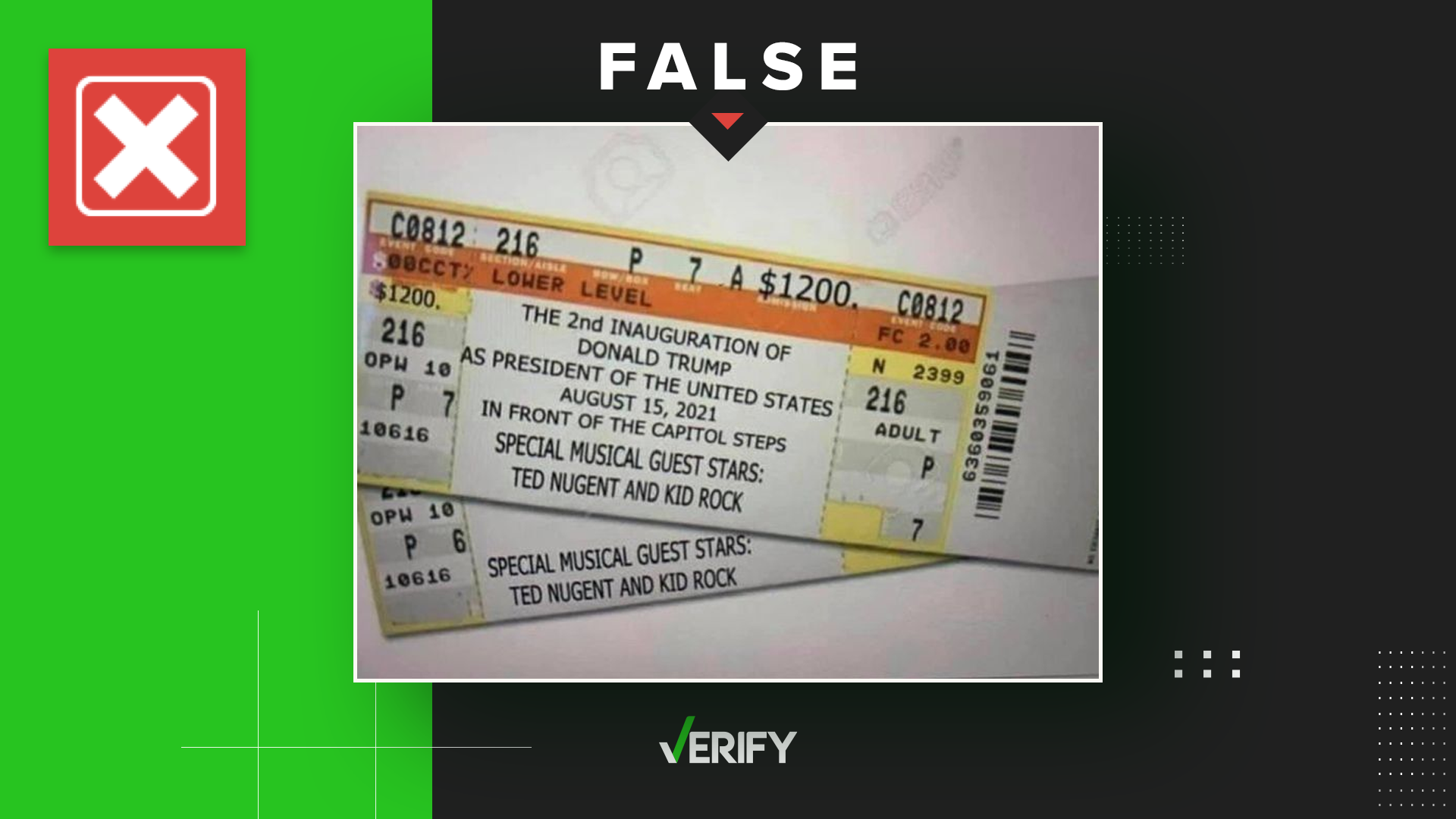 Update: After this story was published, Ted Nugent's tour dates on his website were updated and his tour no longer shows a conflict on Aug. 15, 2021.

While Joe Biden decisively won the 2020 presidential election, online users are still sharing a viral image of tickets for sale to the second inauguration of former President Donald Trump, without evidence Trump actually won the election.

The two tickets are marked on sale for $1,200 each, and Kid Rock and Ted Nugent are listed as headliners for the event.

OMG-just saw this on FB!!!
"This is just INSANE on a whole other level! These “tickets” are being sold for as high as $1,200 each on Q sites all over the internet, the crazy part is that people are talking about how excited they are because they’ve already purchased them." pic.twitter.com/xt9mTOyqmg

Are the tickets to the “second inauguration of Donald Trump” real?

No, these tickets are not real. Former President Donald Trump is not being inaugurated a second time as president, and there is not an event for an inauguration with tickets available.

i can't believe anyone would be dumb enough to pay $1200 for a ticket to Trump's second inauguration. I can get you a four pack for $2000.

The photo was manipulated to include the event information using a stock photo from 123rf.com, a stock content agency that sells royalty-free images, VERIFY found. The same watermarks from the image posted to Twitter confirm it was originally attributed to the stock content agency (see image below).

Additionally, the same metadata (event code, section/aisle, row/box, etc.) on the stock imagery is exactly the same as the image tweeted.

According to the event website from the U.S. Capitol, there isn’t an event scheduled on August 15. There are no events listed on the website or social media accounts for Donald Trump.

As of June 15, Ted Nugent’s tour website said on August 15 the singer would be performing at the Riviera Theatre in North Tonawanda, New York. Nugent's website now states the tour was moved to 2022. Kid Rock will be at Mt. Pleasant, Michigan’s Soaring Eagle Casino on August 15.

Photos of the tickets were also shared across anonymous imageboard pages and semi-closed and pseudo-anonymous social networks.

More from VERIFY: No, there isn’t a trick to ‘circumvent’ Facebook’s algorithm

VERIFY
Our journalists work to separate fact from fiction so that you can understand what is true and false online. Please consider subscribing to our daily newsletter, text alerts and our YouTube channel.  You can also follow us on Snapchat, Twitter, Instagram or Facebook.