Ten Republicans and one Democrat say it is time to end the governor's ability to change law with the stroke of a pen. 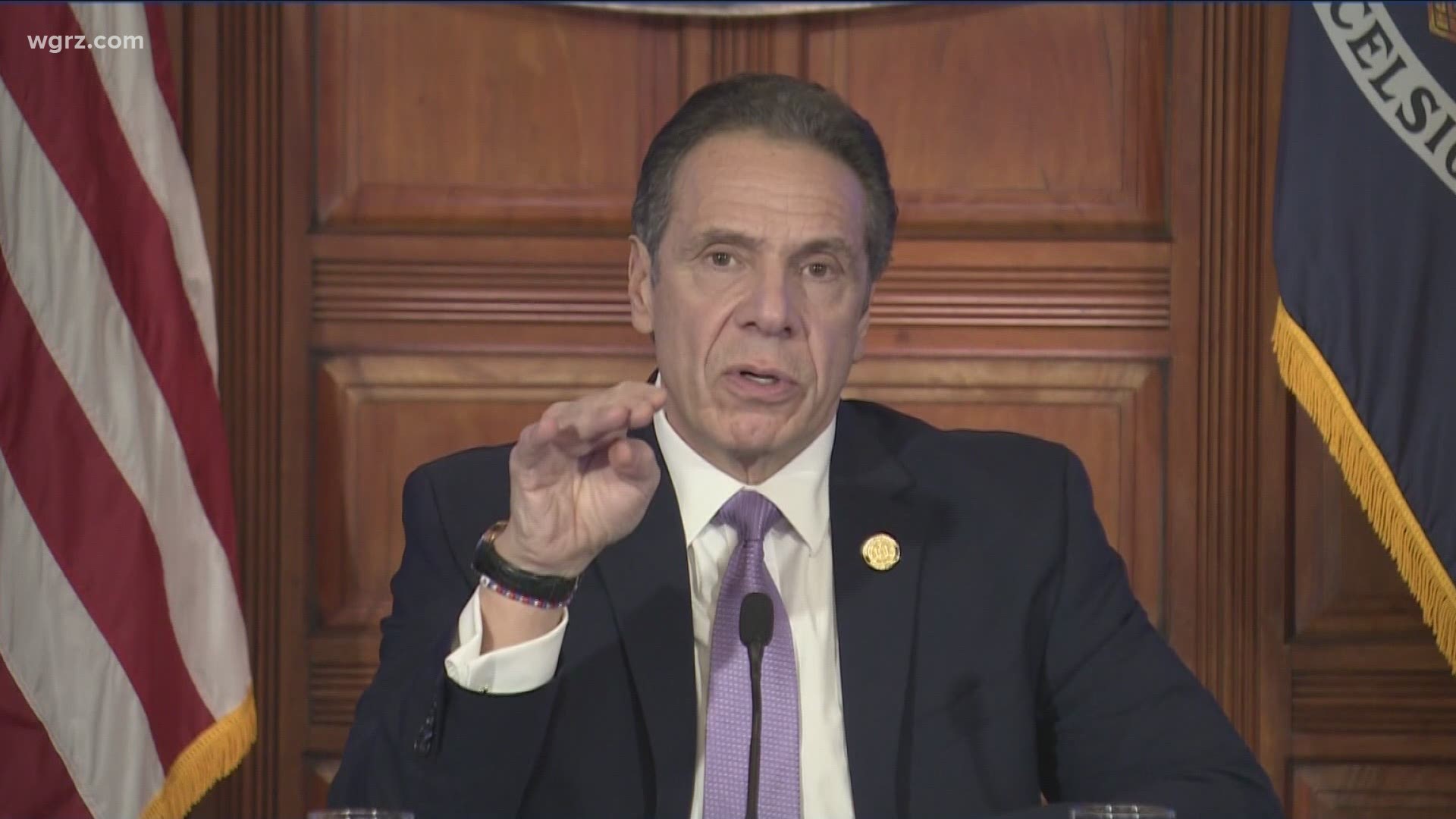 BUFFALO, N.Y. — Most state lawmakers from Western New York, nearly all of them Republicans, say it is time to revoke Gov. Andrew Cuomo’s emergency powers to address the coronavirus pandemic.

Eleven of the 18 area lawmakers say they want an end to the governor’s special authority.

In the past week, 2 On Your Side canvassed the region’s entire delegation of Senators and Assembly Members on whether they are still comfortable with the governor’s ability to change any state or local law with the stroke of his pen.

In March of 2020, the state legislature granted Cuomo this emergency authority. It is set to expire on April 30th of this year.

In the last 10 months, the governor has exercised this authority to issue 94 executive orders. Among them were orders logically necessary to address to the rapidly spreading virus including: limiting gatherings in public and private, closing businesses, later reopening businesses, ordering hospitals expand patient capacity, and requiring people wear masks in public.

But other executive orders seemingly had less to do with protecting the public. One executive order made a second wedding license available for free if the first one expired. Another waived annual performance reviews for public school teachers.

There was also a much-grumbled-about order for people ordering alcohol at a bar or restaurant being required to also order food. Another order limited Memorial Day observances to ten people or less. And Episcopal churches in the state were permitted to postpone annual parish elections in another executive order.

“In the beginning, it was probably necessary during the pandemic, but the time has come for this control to be rescinded,” Republican State Senator Edward Rath of Williamsville said.

All 10 GOP lawmakers from Western New York want Cuomo relieved of his emergency powers. The consistent theme of the answers was that the legislature should play its oversight role as the state constitution requires.

“Republican or Democrat, the legislature has a role to play and has not played it fully for almost a year,” said Robert Ortt of Lockport, Minority Leader of the State Senate Republicans.

In a recent Bee Newspaper op-ed, Burke wrote, “The Governor did an admirable job in those early times of uncertainty,” adding he is now “prepared to vote to rescind those powers.”

The region’s highest-ranking Democrat offered no comment. A spokesman for Assembly Majority Leader Crystal Peoples-Stokes said, “She is not going to address that at this time.”

Chairman of the State Senate’s powerful Transportation Committee, Democrat Tim Kennedy of Buffalo, is in favor of leaving emergency powers in the hands of the governor.

“Any change in decision-making should only be considered when New York begins to safely stabilize and transmission rates are clearly under control,” Kennedy said in a statement.

Newly elected State Senator Sean Ryan’s written response did not clearly indicate his position. But the Buffalo Democrat noted, “During the budget process I anticipate there will be discussions about how the Governor's emergency powers will sunset.”

A statement from freshman Assembly Member William Conrad also did not stake out a position on whether the Governor should retain emergency authority. The Tonawanda Democrat did, however, urge better communication from the governor’s administration, saying, “We need to receive some notice of the governor's announcements before they're delivered publicly.”

2 On Your Side did reach out to the Governor’s Executive Office to ask whether Cuomo believed he needed to retain his pandemic emergency powers.

Senior Advisor Richard Azzopardi responded, “We have been fighting this pandemic day and night for nearly 11 months, and we're going to focus on getting shots in arms – not idle speculation and palace intrigue."

Credit: WGRZ
Three area Democratic Assembly Members did not respiond to repeated attempts for comment on whether the Governor should retain pandemic emergency powers. They are Monica Wallace of Cheektowaga, Karen McMahon of Williamsville and Jonathan Rivera of Buffalo.

Despite multiple attempts to get and interview or comment, three Democratic Assembly Members did not respond to 2 On Your Side. They are Monica Wallace of Cheektowaga, Karen McMahon of Williamsville and Jonathan Rivera of Buffalo.