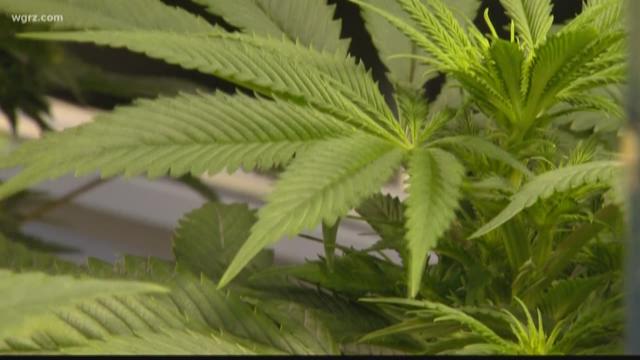 At a press conference in Buffalo, Giambra promised billions of dollars in revenue for infrastructure as a result of the legalized marijuana industry, presented as a counter to Gov. Andrew Cuomo's forthcoming budget announcement on Tuesday.

"I think that legalizing marijuana and using the revenues to create an infrastructure fund to deal with these problems," Giambra said, "is a much more appropriate way to solve our problems than raising new taxes."

However, Giambra did not describe an explicit plan for regulation or taxation of recreational marijuana, nor could he offer an exact dollar amount for potential revenue besides throwing around the term "billions of dollars". The money raised through the marijuana industry, Giambra explained, could help pay for road and bridge repair upstate, as well as for the Metropolitan Transportation Authority in New York City.

Giambra appears to be the first Republican to publicly float a proposal for adult-use marijuana in New York state. A select group of Democrats have long supported bills for legalization in the state legislature, including Assemblywoman Crystal Peoples-Stokes of Buffalo, but the most recent round of legislation in both chambers received zero Republican co-sponsors.

Eight states, as well as the District of Columbia, have legalized recreational marijuana. The federal government in Canada is poised to legalize the drug as well.

"Adult use of marijuana is going to be happening all around us," Giambra said, noting the examples of both Canada and the state of Massachusetts. "For New York state not to get serious about ending criminal activity and the black market underground economy makes no sense."

It's unclear if state lawmakers would ever be able to reach a bipartisan consensus to legalize recreational pot in New York. But it's a bold proposal from Giambra, who probably faces an uphill battle in the race anyway along with the other Republican hopefuls. Assembly Minority Leader Brian Kolb has also said he'll run on the GOP line, and State Senator John DeFrancisco is also exploring the idea. All would be heavy underdogs in a state as blue as New York, where Democrats have an enormous advantage in voter registration.

Perhaps Giambra thinks a plan for legalizing marijuana could boost his long-shot campaign.

"It's a bit surprising," said Carl Calabrese, a Republican political strategist. "But knowing Joel, it's not."

Calabrese recalled Giambra's 1999 campaign for Erie County Executive, when he ran on the unconventional idea of regionalism and merging the metropolitan area. That was an example of an obscure issue that Giambra attempted to elevate, Calabrese said, but he's not sure the marijuana proposal carries the same weight.

That's because it's unclear how much importance voters in New York place on legal adult-use marijuana — even left-leaning Democratic voters. They typically prioritize other issues, mostly related to the economy and jobs (which Giambra could argue is related to his proposal).

"I can never remember seeing legalization of drugs or marijuana in particular in the top five," Calabrese said. "And that's what really drives voters. They may have plus or minus on certain issues, but if it's not their core issue, their primary issue that drives them to vote for Candidate A or Candidate B, it doesn't matter if you make that your key issue. It's gotta be their key issue, the voter's key issue."

There's at least one group offering a strong rebuke of Giambra's proposal — and it has nothing to do with the economy.

Jodi Altman, the campus director for Kids Escaping Drugs in West Seneca, said legalizing marijuana in New York would only increase access for underage kids at risk of addiction.

"We have kids who are using bags and bags of heroin every day, or prescription pills, or cocaine, or meth," Altman said. "But they will all tell you, they started with marijuana. So, to me, there is a gateway to it."

In his press conference, Giambra rejected the theory of marijuana as a gateway drug.

From a political perspective, it remains unclear how party leaders feel about Giambra's candidacy and his unconventional proposal for recreational pot. Nick Langworthy, the Erie County Republican Chairman, did not respond to requests for comment.

But Calabrese said it would take a perfect storm of events for Giambra — or any Republican — to stand a chance against Gov. Cuomo.

"The state has become so blue as a Democratic state," Calabrese said. "I think the only state that's more blue is California."

Fittingly, it was California that became the most recent state to legalize recreational marijuana. But all states with legal pot, including California, are reevaluating their systems in light of harsher directives from the U.S. Department of Justice under Attorney General Jeff Sessions and the Trump administration.

For now, at least, New York doesn't have that problem.