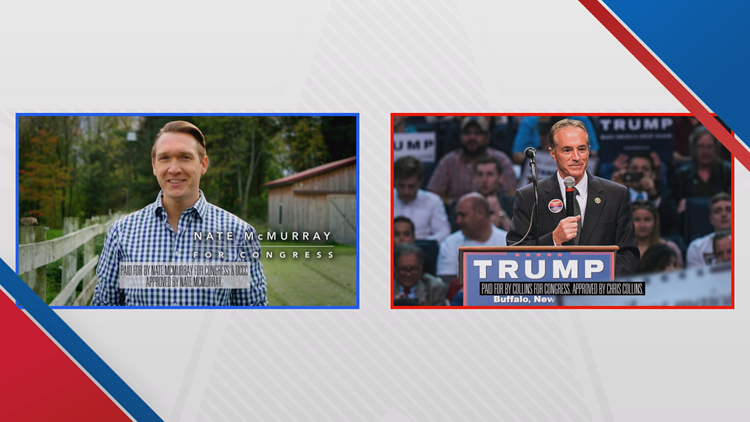 And the increase could play a key factor in critical U.S. House races in New York that will help determine who controls the chamber after Tuesday's elections.

The increase was across the state.

"The Democratic edge is most pronounced in New York City, were the Democratic enrollment edge is massive," the New York Public Interest Research Group said in a statement.

"Yet the Democratic edge is also growing across the non-New York City portions of the state. In fact, the erosion of Republican enrollment is greatest in those parts of the state."

The increase in Democratic enrollment is part of the "blue wave," contended to Geoff Berman, executive director of the state Democratic Committee.

“Given the extreme conservative agenda coming out of Washington, it’s no surprise we’ve seen record enrollment for Democrats who are fired up and ready to fight back," Berman said in a statement.

The Democratic enrollment boost could be bad news for Republicans in New York who haven't won a statewide race since 2002 and is clinging to a one-seat majority in the state Senate.

All 27 U.S. House seats and all 213 state Legislature seats are on the ballot Tuesday, along with all statewide-level offices.

Spanning Brooklyn, Manhattan and Queens, the district gained 27,433 active voters, the most in any district in the state. Of those, 6,633 enrolled as Democrats, a 6.4 percent increase since April.

It's not just the city.

Here's a breakdown of a few key-districts:

Democrats gained 2,444 active voters in the district since April, a nearly 2 percent increase.

Republicans lost over 2,098 active voters, but still hold an over 13,000 active voter advantage.

The district, which spans parts of Brooklyn and Staten Island, saw an active enrollment increase of 13,802 voters: up 3.3 percent among Democrats and 2 percent among Republicans.

Perhaps one of the closest watched House races in the country, New York's 19th Congressional race between Rep. John Faso and Democrat Antonio Delgado is a toss-up.

Democrats have gained 6,142 active voters since April, a 4.3 percent increase.

Republicans in the district that stretches from the Hudson Valley to the Southern Tier, on the other hand, gained just 301 active voters.

President Donald Trump, Eric Trump and Ivanka Trump have all campaigned for Republican Rep. Claudia Tenney, 57, in the district.

No one expected Democrat Nate McMurray, 43, to stand a chance against Republican Rep. Chris Collins, 68.

Collins was then charged and arrested for insider trading, changing the tenor of the race.

The district is still has a heavy Republican enrollment edge, but Democrats picked up 1,848 active voters since April, according to state records.

Republicans, on the other hand, added just 467 active voters.