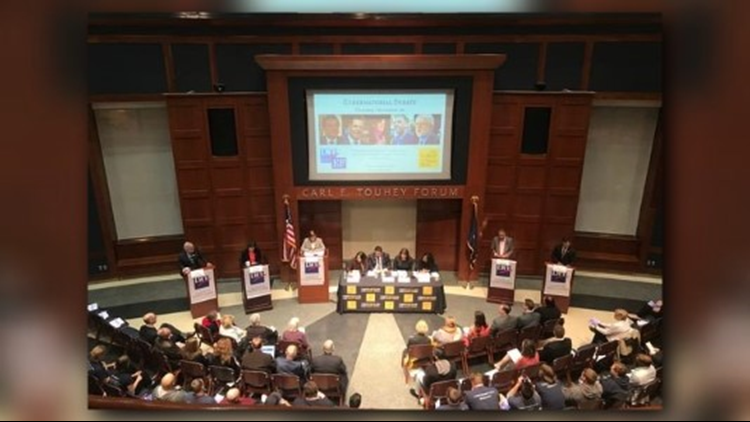 It was a sharp contrast to the heated, one-on-one debate between Molinaro and Cuomo last week in Manhattan, where the candidates frequently spoke over one another and engaged in tense arguments as the moderators struggled to keep Cuomo from going over his time limit.

But the absence of Cuomo, who was invited but declined to attend, ensured Thursday's debate didn't get the same attention as last week's event, which was broadcast statewide on CBS affiliates.

Thursday's debate, on the other hand, was streamed live on the League of Women Voters' social-media accounts.

“Shame on Andrew Cuomo for not coming here," Hawkins said during his closing statement. "Shame on the broadcast networks and cable corporations for not broadcasting this discussion."

Outside, a man in a chicken suit with a "CUOMO" nameplate splashed across his chest chit-chatted with attendees as they entered the debate.

Inside, the candidates took turns answering questions from a panel of reporters, laying out their vision for New York ahead of Tuesday's election.

Molinaro, the Dutchess County executive, touted his plan to cut property taxes, which he says he would do by having the state pick up billions of dollars worth of counties' Medicaid costs.

He's said his plan would allow local property taxes to be cut by 30 percent within five years, a claim that Cuomo, a Democrat, has dismissed as a sham.

“At the end of the day, we need to start again," Molinaro said. "I’m running for governor of New York because I know how hard it is to live in the state of New York.”

Hawkins, making his third run for governor as the Green Party candidate, touted his "Green New Deal" plan, which includes a pledge to move the state to 100 percent renewable energy by 2030.

"That can create hundreds of thousands of jobs in manufacturing and construction, and that can be done all over the state,” he said.

A crowd of about 150 watched as the candidates fielded questions from the panel, with Sharpe's supporters occasionally being reminded to keep their applause to themselves.

Sharpe, who has a dedicated following on social media, is the Libertarian candidate.

Throughout the debate he touted small-government, Libertarian ideals, vowing to sell the naming rights to major bridges and chastising the other candidates when they said they wanted to "invest" in a government program.

All four candidates said they would eliminate the Regional Economic Development Council program, which Cuomo launched in 2011 as the main avenue to distribute tax breaks and incentives to local projects.

Miner, the former mayor of Syracuse who is making an independent bid on the Serve America Movement line, said the grants distributed through the regional council program too often go to Cuomo donors.

She often referred to her local government experience, vowing to cut property taxes by taking on counties' Medicaid costs, like Molinaro, and pressuring private colleges, hospitals and other property-tax-exempt organizations to contribute to the cost of local services.

"The reason why New York's property taxes are higher than they are in the other states is because of how New York funds Medicaid," Miner said.

Instead of the debate, Cuomo participated in a telephone town hall with Jim Gaughran, a Democratic candidate for state Senate on Long Island.

Lis Smith, a spokeswoman for Cuomo's campaign, said Cuomo will be "spending the final days of the campaign speaking directly with voters and helping to elect Democrats up and down the ticket.”

Jon Campbell is a correspondent for the USA TODAY Network's Albany