On the eve of when Republicans from across New York will gather for their state convention in Buffalo,  Erie County Republican Chairman Nicholas Langworthy has announced, for the first time, who he is supporting for President. 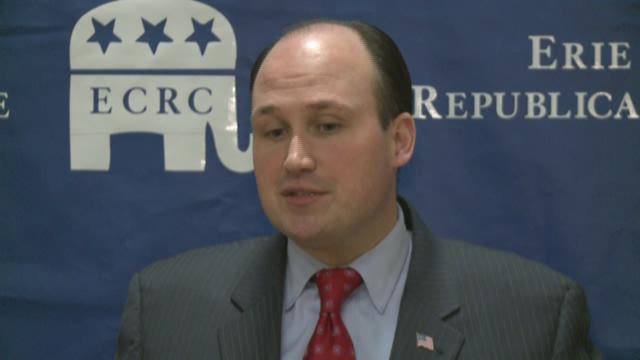 BUFFALO, NY - On the eve of when Republicans from across New York will gather for their state convention in Buffalo, Erie County Republican Chairman Nicholas Langworthy has announced, for the first time, who he is supporting for President.

His choice is Donald Trump, whom Langworthy referred to as the party’s “presumptive front runner.”

Up until Thursday afternoon, Langworthy had eschewed making a public endorsement, but did so in response to a question from 2 On Your Side's Dave McKinley.

It came at the conclusion of a news conference where Langworthy bashed Mitt Romney, after the former GOP Presidential nominee tore into Trump Thursday morning in a speech at the University of Utah.

“People don’t care what a has-been politician like Mitt Romney has to say about the future of this race. As a leader in the Republican party I am completely outraged to subvert the will of the primary voters.”

Langworthy also claims to be far from alone in his outrage.

"We've never had more phone calls than we've had today after Mitt Romney's comments about Donald Trump. ... (Callers) are angry, and they are as angry as they've ever been with the quote-unquote establishment of this party," said Langworthy, who now is starting to believe that old guard Republicans, fearful of losing influence in Washington, are trying to derail Trump, and put Romney on the tracks as part of a plot to do so.

"He (Romney) has become the face of something that I didn't think was real but I am starting to suspect: that there is a strong movement to circumvent the will of the primary voters, and I'm very disappointed by that."

After blasting Romney, Langworthy was asked by McKinley if he supported Trump for President.

McKinley: “Is Trump the candidate you support?”

Langworthy: “I have not made a public declaration to date, but I suppose today I’ve gotten as close as I have so far.”

McKinley: “Well, I wouldn’t want to assume or go out on a limb, so why don’t you take care of that bit of business right now?”

Langworthy, after pausing for a second, said, “I support Donald Trump for President of the United States.”