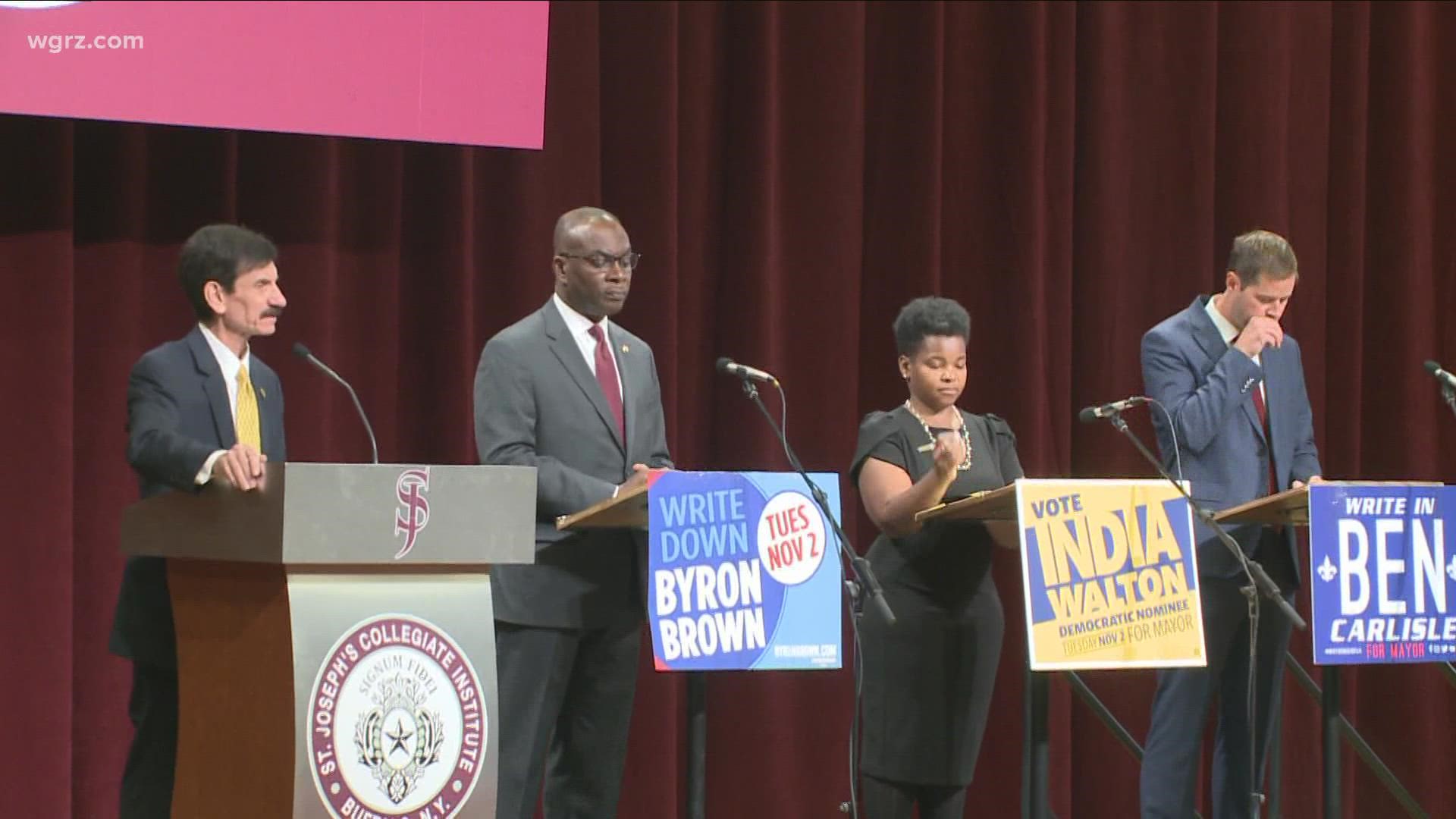 BUFFALO, N.Y. — With Election Day drawing closer, the race for Buffalo City Hall is heating up.

This is the second time Brown and Walton have gone head to head in a debate, with the first being held back in September by the National Association for Black Journalists. 2 On Your Side's Claudine Ewing was one of the panelists on hand for that event who posed questions for the candidates.

Wednesday's debate was moderated by Ted Lina, an AP government teacher, while AP government students and members of the Equity and Justice Club asked the candidates questions. The questions covered a variety of topics from asking the candidates about what they believe led to the rift in the Democratic party, to how might the candidates address gentrification in the City of Buffalo, as well as their take on the COVID-19 vaccine, and their opinion on the proposal for a new Buffalo Bills stadium.

In terms of gentrification, Carlisle said he is unsure if there's anything anyone can do, adding he hopes to find better solutions and ways to use vacant lots to build houses. Meanwhile, Brown says cutting the tax rate has been important to keeping the city affordable, while Walton says more needs to be done to close the racial wealth and homeownership gap.

In regards to the COVID-19 vaccines, Carlisle says he is not opposed to the vaccines or masks, but says he is against mandates. Brown and Walton both encouraged Western New Yorkers to get vaccinated to protect the community. Walton added that she is impressed with the way New York City is operating in the wake of COVID, adding that she would allow a vaccine mandate.

On the topic of a new potential Buffalo Bills stadium, all of the candidates agreed that they would love a new stadium in the City of Buffalo. Both Brown and Walton said they believe the stadium should be built with a "community benefits agreements." However, Brown says the City of Buffalo does not have any financial skin in the game, saying he is not currently at the negotiating table.

Meanwhile, Carlisle said if he was elected as mayor, that he was going to not only fight for a new stadium in the city, but says he will also fight tooth and nail for city officials to be at the negotiating table.

The debate also analyzed political ads from each candidate and allowed the other candidates to respond.

The first ad showcased one from the Brown campaign regarding Walton's alleged plans of firing 100 police officers. The ad claims most of those fired would be women and people of color.

In response to the ad, Walton denied the claim saying there is nothing in her plans to eliminate 100 police officers, adding that Byron brown does not have any plans for the future. Carlisle rebutted, saying the ad did not go far enough, saying it's not only what is in her written plans, but it's also what she has said in a megaphone in public.

A commercial from Walton's campaign was also shown, saying she is going to shake up City Hall, saying the city has had enough of mismanagement.

Carlisle responded succinctly saying its a nice commercial but said, "It doesn't make me want to vote for her."

Brown said the ad brought a tear to his eye, then proceeded to call Walton a -"failed non-profit executive" and highlighting his own accomplishments as mayor during the COVID-19 pandemic.

As the democratic nominee, Walton is the only candidate on the ballot. It's why Mayor Brown has been running a write-in campaign.

An ad from Carlisle's office was played last, which once again targeted Walton's policy of defunding the police. Brown responded saying Walton does want to cut the police budget, while Walton says her plan is a "responsible use of taxpayer dollars," adding that the city needs to be more responsible.