'We will hunt you down': Biden vows to avenge US deaths, continue Kabul evacuation

Biden asked for a moment of silence to honor the service members, bowing his head, and ordered U.S. flags to half-staff across the country. 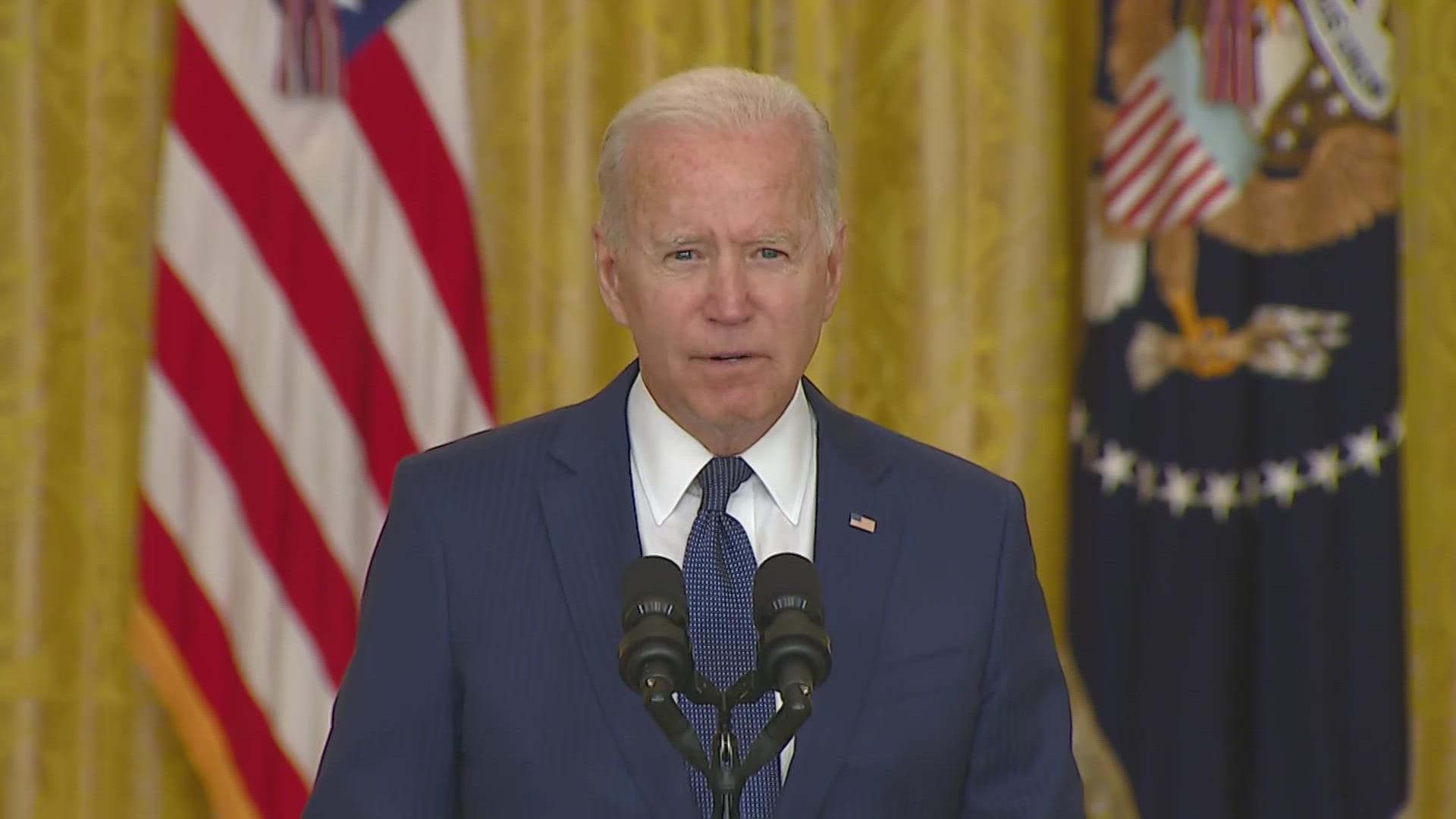 WASHINGTON — For the latest coverage of the attacks at the Kabul airport click here.

President Joe Biden is vowing to avenge the deaths of 13 American troops and dozens of Afghans in attacks at the Kabul airport that thrust the White House deeper into crisis over a chaotic and deadly end to a 20-year war. Retribution, however, will be harder with fewer U.S. intelligence assets in Afghanistan.

In an emotional address after the attacks, Biden declared to the extremists responsible: “We will hunt you down and make you pay.”

The president, speaking from the White House Thursday, said the U.S.-led evacuation of Americans and others from Taliban-controlled Afghanistan would proceed, and indeed more than 12,000 people were airlifted from Kabul in the last 24 hours, as of Friday morning. U.S. military officials have said they are braced for more attempted attacks by the group Biden said was responsible for Thursday's attack — the Islamic State group's Afghanistan affiliate.

The Pentagon on Friday said it had incorrectly reported that in addition to a suicide bomber attack at the airport's Abbey Gate, there was an explosion at the nearby Baron Hotel. Maj. Gen. Hank Taylor of the Pentagon's Joint Staff told reporters that it is now believed there was no attack at the hotel. He said that the U.S. military report was incorrect; he attributed the mistake to confusion in the aftermath of the violence.

The IS affiliate in Afghanistan has carried out many attacks on civilian targets in the country in recent years. It is more radical than the Taliban, who seized power less than two weeks ago and are an enemy of IS. The most heralded American attack on IS came in April 2017 when the U.S. dropped the largest conventional bomb in its arsenal on an IS cave and tunnel complex. The group more recently is believed to have concentrated in urban areas, which could complicate U.S. efforts to target them without harming civilians. 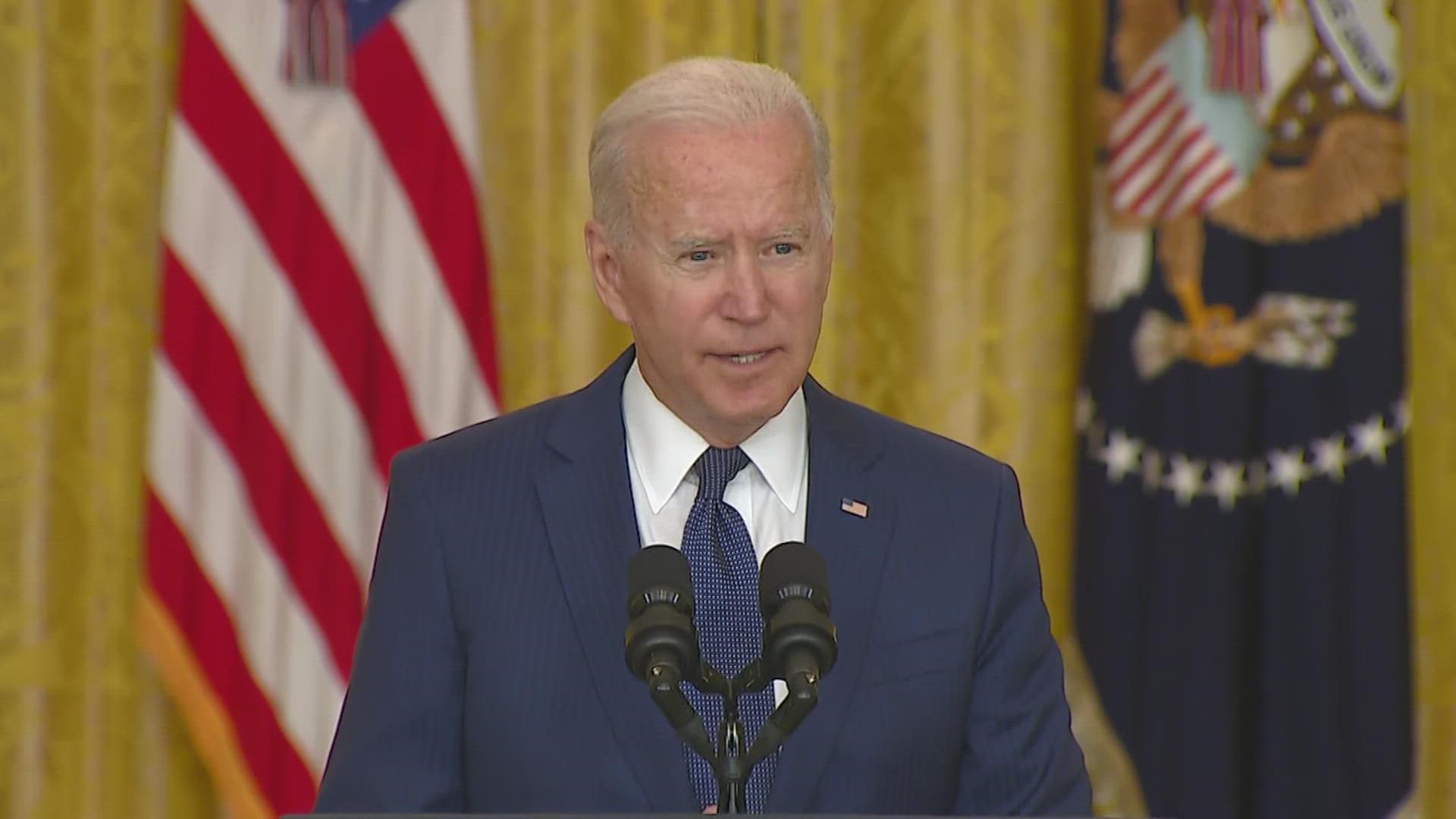 “We will respond with force and precision at our time, at the place of our choosing,” Biden said. “These ISIS terrorists will not win."

As for the bombers and gunmen involved, he said, "We have some reason to believe we know who they are. Not certain.” He said he had instructed military commanders to develop plans to strike IS “assets, leadership and facilities.”

Gen. Frank McKenzie, the U.S. Central Command chief who is overseeing the airlift, told reporters at the Pentagon prior to Biden's remarks that the first step will be determining with confidence who carried out the attacks.

“Yes, if we can find who is associated with this we will go after them,” he said. “We've been clear all along that we retain the right to operate against ISIS in Afghanistan, and we are working very hard right now to determine attribution, to determine who is associated with this cowardly attack, and we are prepared to take action against them — 24/7, we are looking for them.”

Tracking extremist groups in Afghanistan, including al-Qaida and IS, will be more difficult with no U.S. forces on the ground and an absence of a U.S. intelligence network that has been pulled out as part of Biden’s promise to end what he calls a forever war. Biden has vowed, nonetheless, to contain any threat to the U.S. from Afghanistan by monitoring it with aircraft and other assets based outside the country. 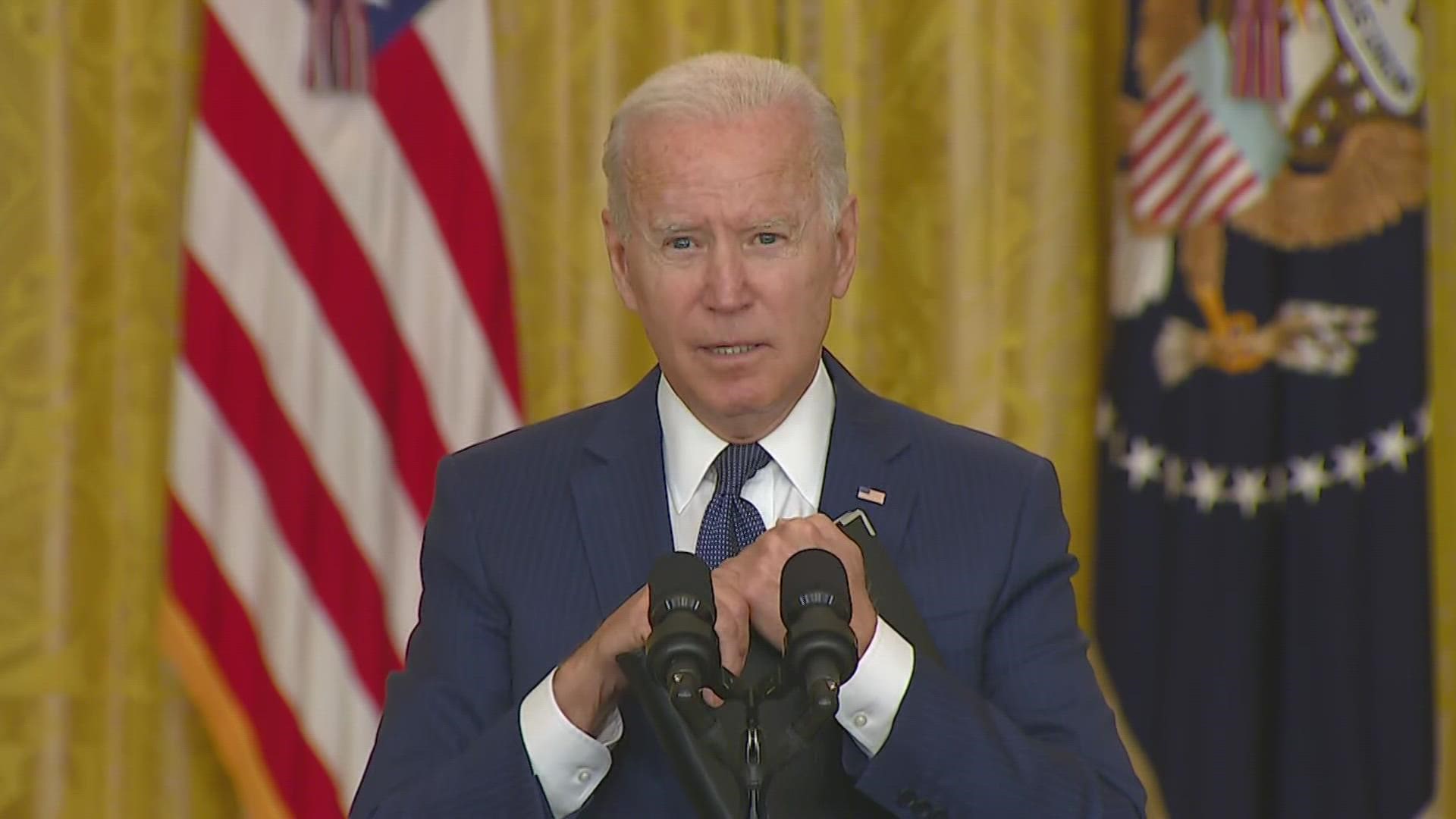 In his appearance at the White House, Biden asked for a moment of silence to honor the service members, bowing his head, and ordered U.S. flags to half-staff across the country. The 13 service members who died include 10 Marines and one Navy sailor. The military has not yet identified any of those or given a service affiliation for the two others.

The U.S.-led airlift continued even as commanders and officials were recovering from Thursday's devastation. The White House said Friday morning that 8,500 evacuees had been flown out of Kabul aboard U.S. military aircraft in the previous 24 hours, as well as about 4,000 people on coalition flights. That is slightly less than the combined total for the day before the attacks. Of the 8,500 people taken out on U.S. flights, about 300 were American citizens, Taylor said, bringing the total number of Americans airlifted from the country so far to 5,100.

The coalition's evacuation flights are scaling back, and the U.S. is scheduled to finish its evacuation operation by Tuesday. As many as 1,000 Americans and many more Afghans are still struggling to get out of Kabul.

Biden said U.S. military commanders in Afghanistan had told him it is important to complete the evacuation mission. “And we will,” he said. “We will not be deterred by terrorists.”

Indeed, McKenzie said, “Let me be clear, while we are saddened by the loss of life, both U.S. and Afghan, we are continuing to execute the mission."

McKenzie said 12 U.S. service members had been killed and 15 were wounded. Later, his spokesman, Capt. William Urban, said the toll had risen to 13 dead and 18 wounded. Urban said the wounded were being evacuated from Afghanistan aboard Air Force C-17 transport planes equipped with surgical units.

It was the deadliest day for U.S. forces in Afghanistan since August 2011, when a helicopter was shot down by an insurgent armed with a rocket-propelled grenade, killing 30 American troops and eight Afghans.

White House press secretary Jen Psaki said that personal calls by Biden to families of the dead would wait for notification of next of kin and that Biden might travel to Dover Air Force Base in Delaware when the remains of the fallen service members are returned.

They were the first U.S. service members killed in Afghanistan since February 2020, the month the Trump administration struck an agreement with the Taliban that called for the militant group to halt attacks on Americans in exchange for a U.S. agreement to remove all American troops and contractors by May 2021. Biden announced in April that he would have all forces out by September.

The administration has been widely blamed for a chaotic and deadly evacuation that began in earnest only after the collapse of the U.S.-backed Afghan government and the Taliban’s takeover of the country. More than 100,000 people have been evacuated so far, Afghans, Americans and others.

House Republican leader Kevin McCarthy of California called for Speaker Nancy Pelosi, D-Calif., to bring the chamber back into session to consider legislation that would prohibit the U.S. withdrawal until all Americans are out. Pelosi’s office dismissed such suggestions as “empty stunts.”