The president's defense will conclude its opening statement, but assertions from John Bolton's new book directly contradict their claims. 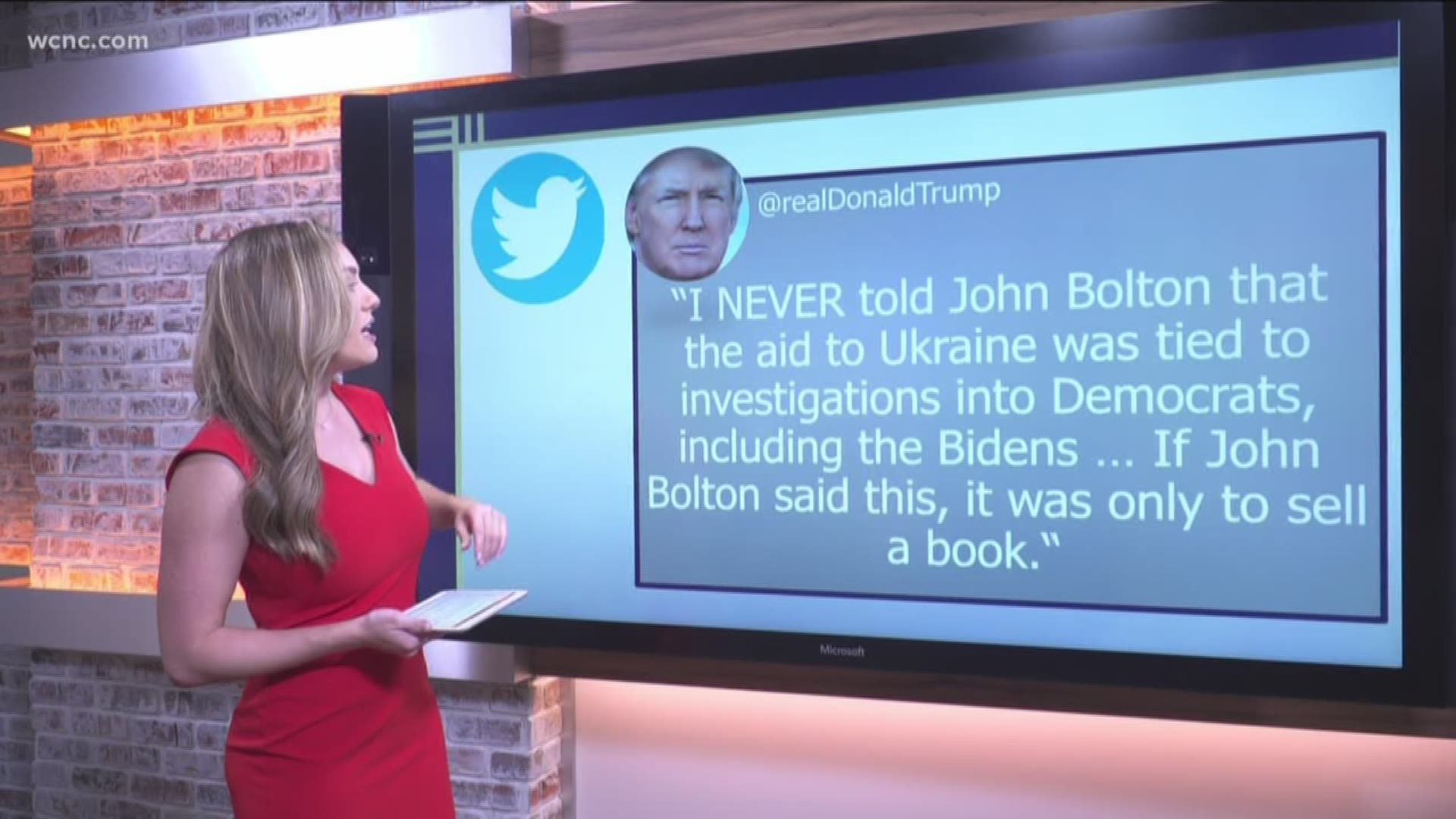 President Donald Trump's legal team ended the opening of his impeachment trial defense Tuesday, painting him and his aides as hounded by investigation and taking a dismissive swipe at an unpublished book by John Bolton that is said to contradict a key defense argument.

“It is not a game of leaks and unsourced manuscripts," said Trump attorney Jay Sekulow. “That's politics, unfortunately."

He was referring to reports of a forthcoming book by former Trump's former national security adviser, who writes that Trump told him that he wanted to withhold military aid from Ukraine until it helped with investigations into Democratic rival Joe Biden. Trump and his lawyers have repeatedly insisted he never tied the security aid to political investigations.

While scoffing at the manuscript, Trump and the Republicans have strongly resisted summoning Bolton to testify in person about what he saw and heard as Trump's top national security adviser.

Majority Leader Mitch McConnell announced that Republicans and Democrats had come to an agreement to allow Senators eight hours on Wednesday and Thursday to ask questions of the legal teams.

Trump's defense had around 14 hours left to use in its presentation, if they had wanted to.

One of the president's lawyers, Deputy White House Counsel Pat Philbin, told the senators that America's Founding Fathers took care to make sure that impeachment was narrowly defined, with impeachable offenses clearly enumerated.

“There has to be a defined offense in advance," Philbin said.

News of the Bolton's manuscript clouded White House hopes for a big finish Tuesday as well as a swift end to the impeachment trial. Democrats are demanding witnesses, and some Republicans are expressing openness to the idea.

One Republican, Sen. James Lankford of Oklahoma, is floating an idea to subpoena Bolton’s book manuscript so senators can see the evidence themselves — but only in private.

It's an idea that may be gaining traction even as other Republicans have warned against a protracted legal dispute with the White House, which has tried to block administration officials.

GOP Sen. Lindsey Graham wrote on Twitter that he “totally” supports Lankford's proposal. Graham, a key Trump ally, said the Bolton document should be made available to the Senate, in a classified setting, “where each Senator has the opportunity to review the manuscript and make their own determination.”

However, Chuck Schumer, the Senate's top Democrat, called the proposal, which would keep Bolton out of public testimony, “absurd."

“We're not bargaining with them. We want four witnesses, and four sets of documents, then the truth will come out," Schumer said.

Senate Republicans were to meet behind closed doors to consider next steps.

The Bolton revelations distracted from hours of arguments Monday by Trump's lawyers, who declared anew that no witness has testified to direct knowledge that Trump's delivery of aid was contingent on investigations into Democrats. Bolton appeared poised to say exactly that if summoned by the Senate.

“We deal with transcript evidence, we deal with publicly available information," Trump attorney Jay Sekulow said. “We do not deal with speculation."

Trump is charged with abusing his presidential power by asking Ukraine's leader to help investigate Biden at the same time his administration was withholding hundreds of millions of dollars in security aid. A second charge accuses Trump of obstructing Congress in its probe.

On Monday, Trump's attorneys, including high-profile lawyers Ken Starr and Alan Dershowitz, launched a historical, legal and political attack on the entire impeachment process. They said there was no basis to remove Trump from office, defended his actions as appropriate and assailed Biden, who is campaigning for the Democratic nomination to oppose Trump in November.

Former Florida Attorney General Pam Bondi devoted her presentation to Biden and his son Hunter, who served on the board of a Ukraine gas company when his father was leading the Obama administration’s diplomatic dealings with Kyiv. The legal team argued that Trump had legitimate reasons to be suspicious of the younger Biden's business dealings and concerned about corruption in Ukraine and that, in any event, he ultimately released the aid without Ukraine committing to investigations the Republican president wanted.

Trump has sought, without providing evidence, to implicate the Bidens in the kind of corruption that has long plagued Ukraine. Though anti-corruption advocates have raised concerns, there has been no evidence of wrongdoing by either the former vice president or his son.

Democrats say Trump released the money only after a whistleblower submitted a complaint about the situation.

Starr, whose independent counsel investigation resulted in the impeachment of President Bill Clinton — he was acquitted by the Senate — bemoaned what he said was an “age of impeachment." Impeachment, he said, requires an actual crime and a “genuine national consensus" that the president must go. Neither exists here, Starr said.

“It's filled with acrimony and it divides the country like nothing else," Starr said of impeachment. “Those of us who lived through the Clinton impeachment understand that in a deep and personal way."

Dershowitz, the final speaker of the evening, argued that impeachable offenses require criminal-like conduct — a view largely rejected by legal scholars. He said “nothing in the Bolton revelations, even if true, would rise to the level of an abuse of power or an impeachable offense."

“Purely non-criminal conduct, including abuse of power and obstruction of Congress, are outside the range of impeachable offenses," Dershowitz said.

Even as defense lawyers laid out their case as planned, it was clear Bolton's book had scrambled the debate over whether to seek witnesses. Trump's legal team has rejected Bolton's account, and Trump himself denied it.

“I NEVER told John Bolton that the aid to Ukraine was tied to investigations into Democrats, including the Bidens," Trump tweeted. "If John Bolton said this, it was only to sell a book.”

Republican senators face a pivotal moment. Pressure is mounting for at least four to buck GOP leaders and form a bipartisan majority to force the issue. Republicans hold a 53-47 majority.

“John Bolton's relevance to our decision has become increasingly clear,” GOP Sen. Mitt Romney of Utah told reporters. Sen. Susan Collins of Maine said she has always wanted “the opportunity for witnesses” and the report about Bolton's book “strengthens the case.”

At a private GOP lunch, Romney made the case for calling Bolton, according to a person unauthorized to discuss the meeting and granted anonymity.

Other Republicans, including Sen. Pat Toomey of Pennsylvania, said if Bolton is called, they will demand reciprocity to hear from at least one of their witnesses. Some Republicans want to call the Bidens.

Senate Majority Leader Mitch McConnell hadn't known know about Bolton’s book, his office said. But the GOP leader appeared unmoved by news of the book. His message at the lunch, said Indiana GOP Sen. Mike Braun, was, “Take a deep breath, and let’s take one step at a time.”

Once the president’s team wraps up its arguments, senators have 16 hours for written questions to both sides. By late in the week, they are expected to hold a vote on whether or not to hear from any witnesses.

Trump and his lawyers have argued repeatedly that Democrats are using impeachment to try to undo the results of the last presidential election and drive Trump from office.

Democrats, meanwhile, say Trump's refusal to allow administration officials to testify only reinforces that the White House is hiding evidence. The White House has had Bolton's manuscript for about a month, according to a letter from Bolton's attorney.