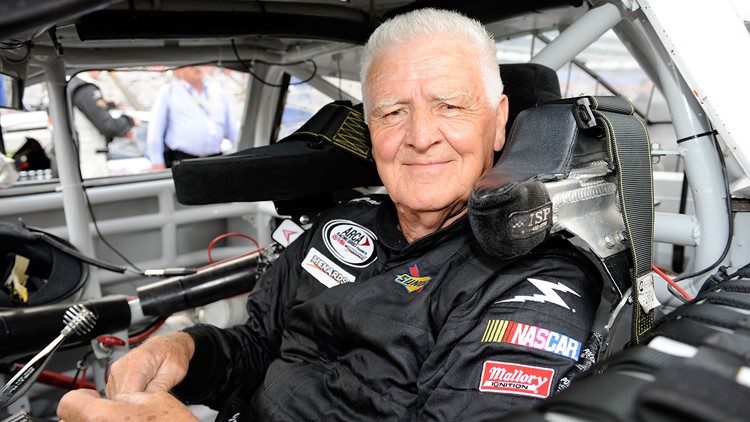 Photo by: John Harrelson/Getty Images for Texas Motor Speedway
James Hylton, driver of the #48 Radon.com Dodge, sits in his car prior to the start of the ARCA Racing Series Rattlesnake 150 at Texas Motor Speedway on April 16, 2010 in Fort Worth, Texas.

Hylton, 83, and his son, James Jr., 61, were killed in a highway accident Saturday morning in Georgia while on the way home from an Automobile Racing Club of America (ARCA) race at Talladega Superspeedway. Hylton’s team participated in the race with driver Brad Smith.

Hylton and his son were passengers in a truck that crashed on the northbound lanes of I-85 near Carnvesville, Ga., around 6 a.m., Franklin County (Ga.) Deputy Coroner Clayton Bryant told USA TODAY Sports. The truck was pulling a trailer carrying a race car.

The driver of the truck, reportedly crew chief Terry Strange, was rescued and taken to a Greenville, S.C., hospital. Both Hylton and his son were pronounced dead at the scene.

The case remains under investigation by the Georgia State Patrol. An autospy will be performed in Decatur, Ga., and results are expected to be relased Monday or Tuesday, Bryant said.

Hylton is not a household name for modern-era stock car racing fans. He was not a champion or a winner of dozens of races. He won twice — both considered upsets — at Richmond, Va., in 1970 and, ironically, at Talladega in 1972. He was NASCAR’s Cup Rookie of the Year in 1966.

Hylton is best remembered as a driver who raced against the wind. He had sponsorship at different levels through a long career of driving and team ownership, but the badge he carried was as an independent, a determined sort who raced with considerably fewer resources than most of his competition. His shop in Inman, S.C. had an eclectic collection of parts, pieces and racing memorabilia.

His career began in the 1950s as a mechanic for future Hall of Fame driver Rex White, but the urge to drive eventually found Hylton fielding his own cars. He ran everywhere and drove everything, recording enough points to take second in the Cup Series standings three times (1966, '67 and '71).

Hylton occasionally wrestled with authority, particularly that practiced by NASCAR. He fought for (and occasionally with) the struggling independent drivers who raced more for fun than for money. He often was a thorn in the side of NASCAR officials and promoters.

And he was a character. He and Richard Childress, who would go on to amazing success with driver Dale Earnhardt Sr., moved through the sport together as drivers trying to stretch a buck to its fullest extent. They pulled pranks on each other with alarming frequency, and most of their antics can’t be repeated in mixed company.

Hylton drove off and on until his mid-70s. He competed in a Camping World Truck Series race at Pocono Raceway in Pennsylvania at 76 in 2011. He tried to qualify for the Daytona 500 as a 72-year-old in 2007 and almost made it, sparking a long line of jokes about how many pit stops he might have to make for diaper changes.

He joked along with everyone else.

I saw Hylton at a race track for the first time at Talladega in 1975. I drove into the track’s huge infield, and the first person I saw was Hylton, standing over a spindly $3 grill cooking hamburgers. He smiled, waved and motioned me over for lunch. Not a good burger, but good company.

The last time we talked was at Daytona International Speedway in February. His ARCA team was there, and he was entertaining a growing crowd with stories from across the years.

Wearing a battered hat and behind his always-present cigar, he was in charge of the moment.

That Hylton would lose his life in a highway accident is irony of the worst sort. Throughout a well-lived life, he cheated death on more than a few occasions, both on race tracks and elsewhere.

Speedway garages will not be the same without him.