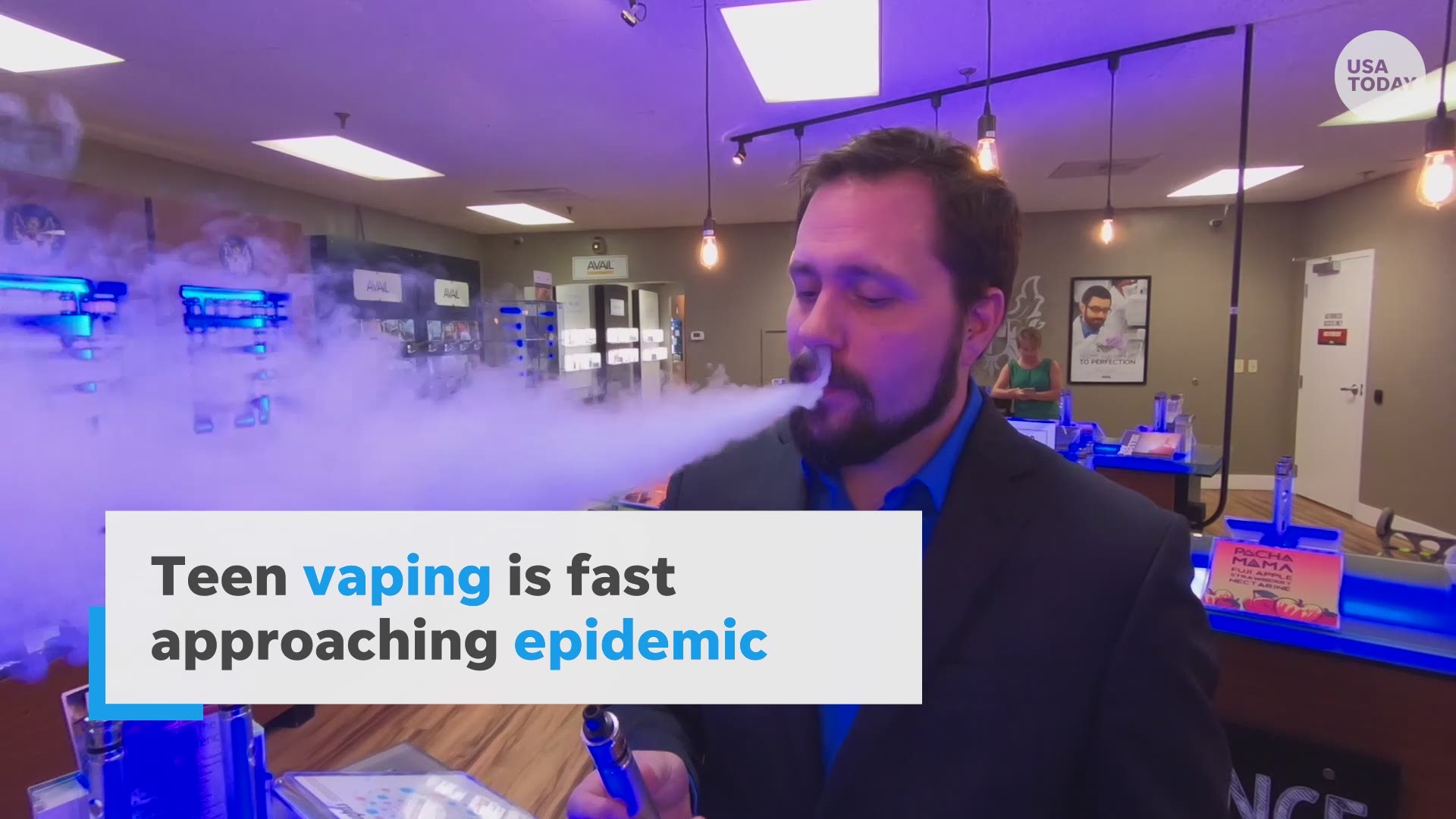 Food and Drug Administration Commissioner Scott Gottlieb on Wednesday declared youth vaping an "epidemic," and said the agency will halt sales of flavored electronic cigarettes if the major manufacturers can't prove they are doing enough to keep them out of the hands of children and teens.

The FDA says it's giving manufacturers of Juul, Vuse, MarkTen XL, Blu and Logic 60 days to submit “robust” plans to prevent youth vaping. If the agency doesn’t think their plans go far enough, it could order their flavored products off the market. Those five brands make up more than 97 percent of the U.S. market for e-cigarettes, FDA says.

The FDA is "reconsidering our overall approach" after a review of preliminary data on youth vaping, Gottlieb told USA TODAY.

"Teenagers are becoming regular users, and the proportion of regular users is increasing," says Gottlieb, a physician. "We’re going to have to take action.

"No one can look at the data and say there’s no problem," he says.

More than 2 million middle school, high school and college students use the battery-powered devices to heat liquid-based nicotine into an inhalable vapor. E-cigarettes are by far the most popular tobacco product among teens: Nearly 12 percent of high school students and 3 percent of middle school students used the device in the past 30 days, according to the 2017 National Youth Tobacco Survey, released in June.

The FDA's new approach is much faster than the rulemaking process the agency announced in March. That was quickly criticized as too little, too late by public health advocates.

The brands will no longer be largely immune from regulations simply because they were already on the market in August 2016 when the FDA announced e-cigarettes would be regulated like other tobacco products.

Companies whose products were ordered off the shelves would have to show they have a net positive public health benefit before resuming sales.

The FDA also announced the results of its largest enforcement effort yet against e-cigarettes. The agency targeted more than 1,300 online and brick-and-mortar retailers with warning letters or civil penalties for selling to minors. Officials said 131 of the retailers will have to pay penalties.

Gottlieb told USA TODAY last month that the FDA was weighing the benefits of flavored e-cigarettes in helping adults quit smoking against the risk to young people who become addicted to tobacco through vaping.

Many adults prefer flavored e-liquid when they are trying to quit. But Gottlieb now says he's prepared to make vaping less attractive to adults if it reduces the harm to teens.

Gottlieb said the agency could also target "cartridge-based products" such as the USB-sized Juul, which is favored by teens and sold in convenience stores. Adults tend to use bulkier "open tank" vaping products, he noted.

Credit: Courtesy of Spencer Re
Spencer Re is shown vaping .

He said the company would support “reasonable regulation” to restrict advertising and the naming of flavors such as cotton candy and gummy bear that target children.

Juul has mounted an aggressive advertising campaign, including full-page ads in newspapers, targeting parents with messages about teen vaping.

The FDA said Wednesday for the first time that some be e-cigarettes might be on the market illegally. Officials said they're investigating some manufacturers for violating rules that require regulators' approval to introduce new products after August 2016. They would not say which companies they are investigating.

The Campaign for Tobacco-Free Kids, the anti-tobacco group Truth Initiative and other groups said last month that several large companies, including the parent company of Phillip Morris, were violating the so-called deeming rules.

Altria, the parent company, said all its products were in compliance with FDA regulations.

The American Lung Association, the American Academy of Pediatrics and other health groups sued the FDA in March over a delay in the deeming regulations from August 2018 to 2022.

Gottlieb said last month that even the 2022 deadline would be a challenge for some manufacturers to meet, so they had "better start now."

Spencer Re of Napa Valley, Calif., says he started vaping five years ago as a senior in high school. That led him to start smoking in college.

Cigarettes eventually “completely replaced vaping," he said. When he wanted to quit, he says, he turned back to e-cigarettes.

Re says he can't stand the taste of tobacco and cream flavors, so he vaped only fruity flavors.

He thinks the idea that vaping is a "forbidden substance," more than the flavors, is what makes it more attractive to teens.

Melissa Sporn, a Fairfax County, Virginia, child psychologist, said teen patients are "self medicating" with e-cigarettes. Usually, she said, it's because they are anxious or depressed.

"It’s a numbing of those feelings," she said.

Jack Cao, who co-owns a chain of vape shops in California, Texas and Virginia, questions whether a ban on the sale of flavored e-liquid would have much impact.

If stores such as his could not sell flavored e-liquid, he said, it would only encourage a new industry of flavors that users themselves would mix with unflavored liquid.

Still, he's been bracing for tougher FDA regulations that could dramatically reduce if not eliminate his vaping business.

He has started a tee shirt business in the back of his Falls Church, Virginia, shop.