2017 was a big year for sports comebacks. 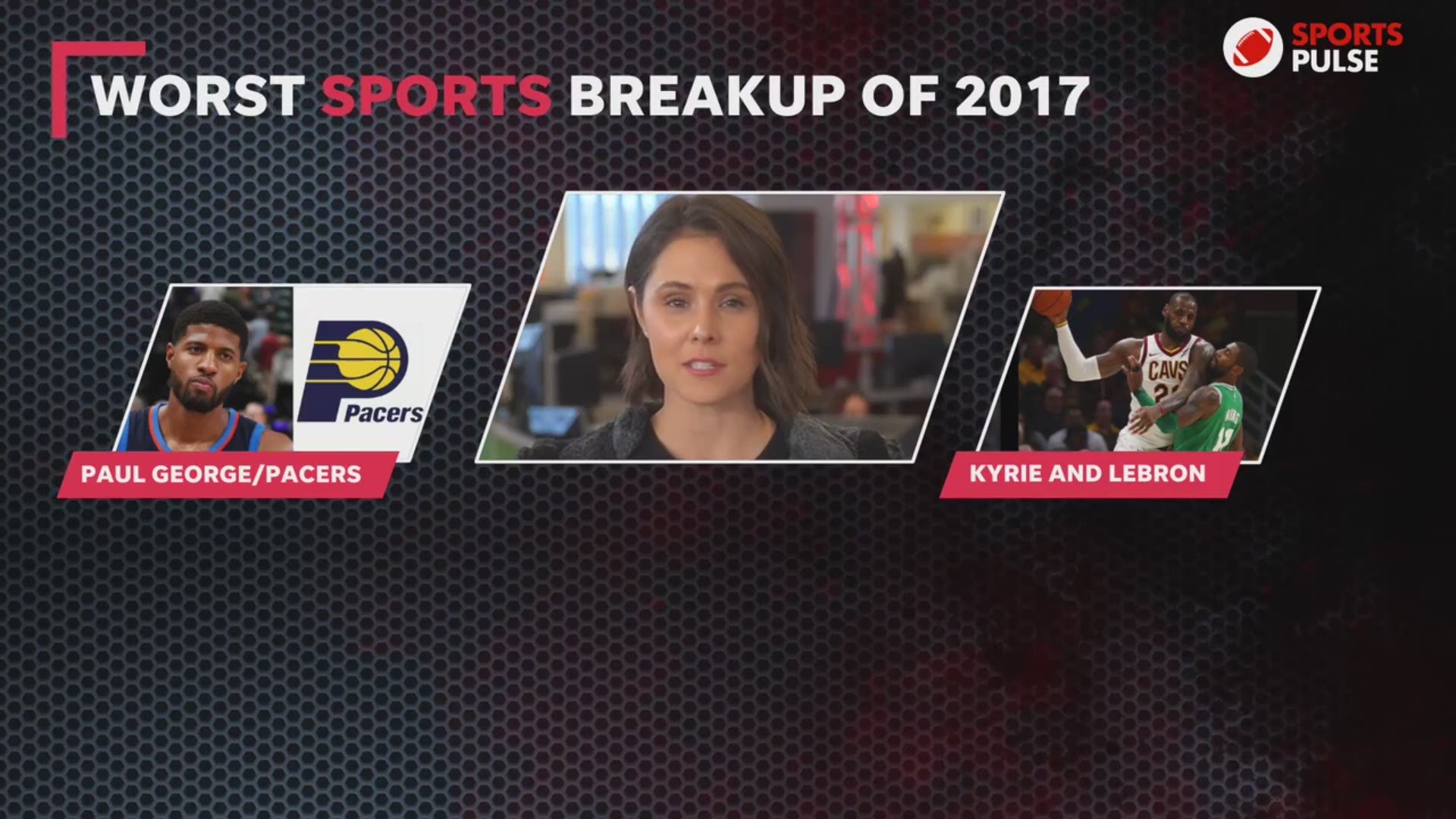 If you could only pick one word to sum up 2017 in sports, it would be the year of the comeback.

Jan. 9: The 2017 action really ramped up when Clemson faced Alabama in the National Championship game. It was a back-and-forth matchup that came down to the last seconds. While the Tide took a 31-28 lead with just two minutes left, Clemson put together an impressive final drive that secured them the championship with just one second left in the game.

Jan. 28: In the Australian Open final, Serena Williams beat her older sister Venus to win her 23rd Grand Slam singles title. Later the world would find out Serena was 10 months pregnant at the time. Serena wound up accidentally revealing her pregnancy on Snapchat a few months later.

Feb. 5: Sorry Falcons fans, you knew this one was coming. In Super Bowl 51, the Patriots were trailing 28-3 in the second quarter, then scored 31 unanswered points to win it in overtime. It was also the first-ever overtime game in Super Bowl history. And ever since then, the “28-3” trolling has not let up.

Feb. 5: New England Patriots running back James White scores the game-winning touchdown in overtime of Super Bowl LI against the Atlanta Falcons. The score capped the Patriots' comeback from a 28-3 deficit.

Feb. 26: Kurt Busch won the Daytona 500 with a last-lap pass as other contenders ran out of gas in the final laps. It was Busch's first Daytona 500 victory in his 17th try and after coming in second on three different occasions.

March 16: Northwestern found itself in the NCAA tournament for the first time in 77 seasons and they made sure not to throw away their shot. The Wildcats did cough up a 15-point second-half lead but survived to score their first tournament victory.

March 19: March Madness is always filled with special moments and shocking upsets and 2017 was no exception. One of the year's biggest upsets was when No. 7 South Carolina knocked off No. 2 seed Duke, 88-81. The Gamecocks would build on that momentum in the later rounds and made it into the Final Four for the first time in program history.

The South Carolina Gamecocks pose for photos with the NCAA trophy after winning the championship game of the 2017 NCAA Women's Final Four on April 2, 2017 in Dallas, Texas.

April 17: In one of the most touching moments from this year's Boston Marathon two soldiers who were running the race helped carry a fellow runner across the finish line.

April 26: Maria Sharapova, the five-time Grand Slam champion and former No. 1, returned from a 15-month doping ban and won her first match.

June 11: With its Stanley Cup Final victory over the Nashville Predators, the Pittsburgh Penguins became the first NHL back-to-back champion since 1998. Many saw the Penguins impressive playoff run as solidifying the team's status as a dynasty.

June 12: Steph Curry, Kevin Durrant and the Golden State Warriors beat the Cleveland Cavaliers to take home the NBA title. It was the team's second championship in three seasons.

July 26: Well this was a new one and a funny highlight from the MLB season…Adrian Beltre got ejected from a game after he wasn't standing in the on-deck circle. When the umpire instructed him to get into the circle Beltre instead grabbed the circle and moved it a few feet to where he had been standing. The umpire didn't like that and tossed him from the game.

July 26: Texas Rangers third baseman Adrian Beltre provided one of the funniest moments of the MLB season when he moved the batting cirlce to him, rather than go to it as instructed by the umpire. Unfortunately for Beltre, he got ejected.

July 29: The return of Jon Jones in the UFC could've been one of the year's biggest comeback stories, instead his big return gets a massive asterisk by it. Jones returned from a one-year suspension to beat Daniel Cormier at UFC 214 and win the light heavyweight title…but his title reign didn't last very long. In September, he was stripped of the title (again) after failing a drug test (again). The case has yet to be settled but Jones faces up to a four-year ban after a drug test found a banned steroid. Jones has said he “never knowingly” took the substance in question.

Aug. 5: Usain Bolt closed out his record-breaking career at the world track and field championships but it wasn't the victory lap that most people expected. In the 100-meter final, Bolt ended up in third place behind American runners Justin Gatlin and Christian Coleman. It only got worse from there for Bolt. The eight-time Olympic gold medalist then tore his hamstring in the final leg of the 4x100 meter relay and couldn't finish what was his last race ever.

Aug. 26: After so much hype and build-up the world finally got to see 'The Money Fight' between Floyd Mayweather and Conor McGregor. Mayweather won with a 10th round TKO and earned himself a guaranteed $100 million but anticipated he would make an additional $200 million as part of his share of the profits.

Aug 26, 2017; Las Vegas, NV, USA; Floyd Mayweather Jr. lands a hit against Conor McGregor during their boxing match at the at T-Mobile Arena.

Sept. 2: Fans at the University of Iowa created what's become one of the best in-game college football traditions – waving to patients at the Iowa Children's Hospital. While the public-address announcer tells fans when its time to wave, this new Iowa tradition grew from the fans. According to USA TODAY, it all started when Iowa fan Krista Young came up with the idea and posted about it in a fan Facebook page. It's a moment that's now very special to fans, opponents, and the patients and families watching the action from the hospital.

Sept. 14: The Cleveland Indians historic win streak ended at 22 games but it was the second longest win streak in baseball history. USA TODAY Sports compiled a handful of statistics from that incredible run: The Indians only trailed 9 innings…out of 199, they outscored their opponents 142-37, and had a team ERA of 1.58.

Oct. 10: After losing to Trinidad and Tobago the U.S. men's national soccer team failed to qualify for the World Cup for the first time since 1986. It was a terrible night for U.S. soccer who just needed a tie to make the World Cup, but couldn't make it happen.

Nov. 1: The Houston Astros World Series championship couldn't have come at a better time for Houston. The region had been devastated by Hurricane Harvey just a few months earlier and the Astros first franchise championship brought a glimmer of hope and pride back to residents.

The Houston Astros celebrate defeating the Los Angeles Dodgers 5-1 in game seven to win the 2017 World Series at Dodger Stadium on November 1, 2017 in Los Angeles, California.

Nov. 19: The end of this season's NASCAR Monster Energy Cup Series marked the end of the 19-year career of the sport's most popular driver, Dale Earnhardt Jr. He wrapped up his career as Martin Truex Jr. won his first series championship.

And this year in the NFL season, one thing we all can be thankful for is the rule change allowing more celebrations following touchdowns. It's led to all sorts of end zone creativity and ESPN recently asked the players to pick their favorite of the season. The top four vote-getters were the Minnesota Vikings doing Duck, Duck, Goose (Gray Duck); the Steelers playing Hide-And-Seek; the Chiefs Potato Sack Race; and the Eagles with an Electric Slide.