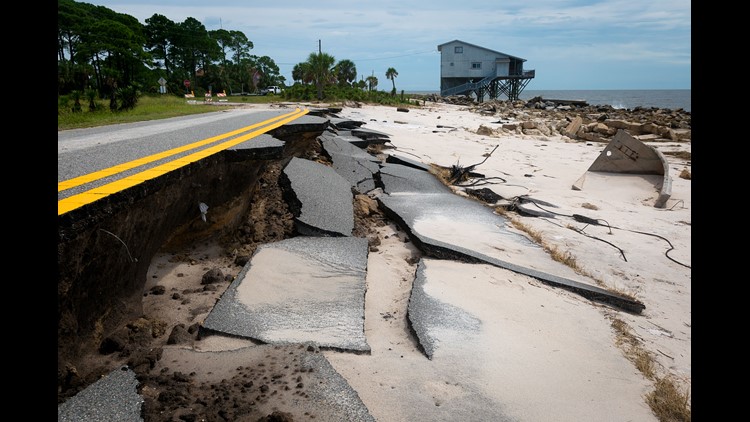 Photo by: David Albers/Naples Daily News
A road sits damaged from Hurricane Hermine in the Alligator Point community of Franklin County, Fla. on Saturday, Sept. 3, 2016. The Category 1 hurricane made landfall near the beach community early Friday morning in the Big Bend area of Florida.

These are some of Florida's most vulnerable areas. And they're right in the path of Hurricane Michael

These are some of Florida's most vulnerable areas -- and they are in the path of Hurricane Michael
Author: Ryan Mills (Naples Daily News)
Published: 9:41 AM EDT October 9, 2018
Updated: 10:13 AM EDT October 10, 2018
A fisherman throws a cast net near a damaged sea wall in the Alligator Point community of Franklin County, Fla. on Saturday, Sept. 3, 2016. The Category 1 hurricane made landfall near the beach community early Friday morning in the Big Bend area of Florida.
David Albers/Naples Daily News

As Hurricane Michael barrels through the Gulf of Mexico, it is bearing down on one of Florida’s poorest and most vulnerable regions, with limited infrastructure and little coastal protection.

Hurricane models predict that Michael will make landfall as a major hurricane with winds up to 120 mph on Wednesday afternoon near Panama City, with the deadliest eastern mass of the storm curving through some of the Florida Panhandle’s poorest communities.

Forecasters predict storm surge as high as 12 feet from Panama City east in the state's Big Bend region, which hasn't seen a Category 3 storm like Michael since Hurricane Eloise in 1975. Mandatory evacuations already are underway in parts of Bay County, where Panama City is located, and into the Big Bend, including Gulf and Franklin counties.

Storm surge is the biggest concern for coastal residents. The majority of the Panhandle and Big Bend regions are under both hurricane and storm surge warnings.

Some areas in the Panhandle, like Destin and Panama City, have dense development behind the beachfront homes, condos and hotels, and there are bays and inlets that can easily dump into nearby neighborhoods.

Retired Franklin County administrator Alan Pierce said there is one highway — U.S. 98 — running east and west through his community.

“And guess what, most of that is within 100 feet of the coast,” Pierce said.

If storm surge washes away a section of that highway, it could cut the county in half, making it difficult for emergency responders to reach residents in need, and nearly impossible to run school buses, Pierce said. The nearest detour is about 30 miles north, he said.

A road sits damaged from Hurricane Hermine in the Alligator Point community of Franklin County, Fla. on Saturday, Sept. 3, 2016. The Category 1 hurricane made landfall near the beach community early Friday morning in the Big Bend area of Florida.
David Albers/Naples Daily News

The Alligator Point community in Franklin County, which has retreated from the coast for more than a decade from ongoing erosion, could lose several homes if hit hard.

Beaches serve as a magnet for tourists who flock to Florida, but they also provide a necessary buffer to protect upland structures from storm surge. Alligator Point residents rejected a plan to pay for beach renourishment in 2007.

To the west, Cape San Blas in Gulf County is in a similar bind. For years the county has been planning a beach renourishment project for Cape San Blas, a tourist destination and economic driver for the community, but also one of the state’s fastest-eroding beaches.

The project was scheduled to start this week, said Warren Yeager, the county’s RESTORE Act coordinator. Instead, contractors are demobilizing their equipment until the hurricane passes.

“We’re worried about the wash away of the roadway, and the water and sewer lines getting destroyed,” Yeager said.

Debbie Flack, president of the Florida Shore & Beach Preservation Association, said Cape San Blas is particularly vulnerable to storm surge, as are other coastal communities in the Big Bend. That region of the state has a predominantly vegetative shoreline as opposed to sandy beaches, and a shallow offshore profile.

Beaches to the west of Cape San Blas stretching toward Panama City are in good shape to help protect from the hurricane, Flack said.

“Bay County, yeah, they could get some of this, but their beach is in excellent condition,” she said.

Drivers line up for gasoline as Hurricane Michael bears down on the northern Gulf coast of Florida on October 8, 2018 in Tallahassee, Florida.
Mark Wallheiser, Getty Images

Most of the communities surrounding Tallahassee, which is inland in the storm's path, and in the Big Bend curve of the Panhandle are rural and sparsely populated. And many have poverty rates well above Florida’s average of 16.1 percent, according to 2016 U.S. Census estimates.

“We have a lot of nice homes, but the majority of our homes in our county are mobile homes," said Madison County Commissioner Alston Kelley. "And a lot of them are out in the woods, off main roads.

“They very well may be without power for several days, depending on how hard we get hit,” Kelley said.

The county is encouraging residents to take shelter in the community’s central school. Downed trees and power lines are Kelley's biggest concerns, but he is confident Madison County can handle the storm.

Coastal community leaders also worry about the potential economic impacts of Hurricane Michael. About 30 percent of the Northwest Florida region’s jobs are tied to tourism, according to a 2016 VisitFlorida study.

Blake Rish, vice president of Gulf County’s Tourist Development Council board, said losing the Cape San Blas beach would be “devastating.” The storm could also hurt the community’s sport fishing and scallop industries, as well as the mom and pop shops and the vacation rental business, he said.

In 2016, tourists injected more than $66 million into the Gulf County economy alone, with most of it in lodging, dining and shopping, according to the VisitFlorida study.

But those problems will have to wait until Michael passes. For now, the focus is on saving lives.