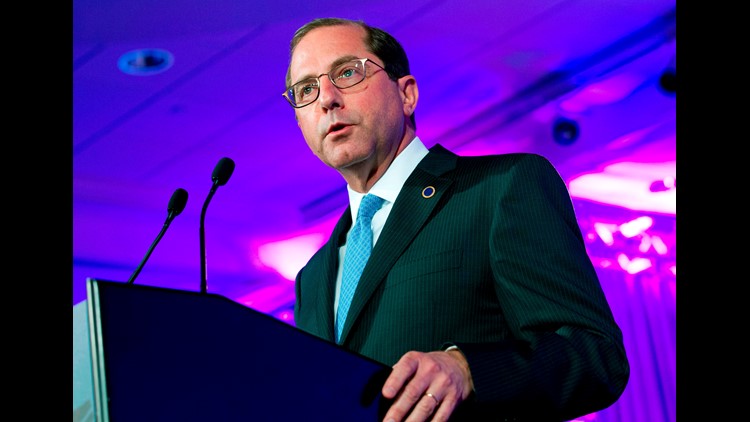 Under the new rule, consumers will be allowed to buy health insurance plans that offer limited benefits and have less expensive monthly premiums. These plans are meant as a short-term option for consumers who lack coverage from an employer or are contractors, but experts warn these plans also can deny coverage of existing medical conditions.

Last month, the Trump administration released a rule for "association plans" that allow small businesses and sole proprietors to band together and buy coverage that's less expensive than existing options.

Speaking to reporters Wednesday, Health and Human Services Secretary Alex Azar said the long-term goal remains to "repeal and replace" the ACA. These rule changes represent his attempts to "reinvent and transform the system we have (with) the tools we have at our disposal" in a way that gives "as many options to individuals as possible."

The ACA required individual plans sold on and off the marketplace to cover a group of set benefits such as emergency, maternity and mental health care. The Obama administration limited the sale of short-term plans to 90-day periods as a stop-gap between more robust plans.

Also, unlike the so-called Obamacare plans, the short-term plans can deny or limit coverage based on an individual's medical history. Experts say the plans may appeal to healthier adults who don't need coverage for a chronic disease but want to spend less on health insurance premiums.

The average monthly premium for a short-term plan was $124 during the final three months of 2016, compared with $393 for a marketplace plan before subsidies were calculated, according to the U.S. Department of Health and Human Services. Nearly nine out of 10 plans sold on the marketplace are subsidized based on an individual's income.

The plans could also help lower deductibles for those who choose to buy them.

With the three-month restriction on short-term plans, people’s deductibles were reset every three months. This meant if consumers missed the ACA open enrollment, their deductible would be reset four times before exchange coverage was available again, notes Kev Coleman, who heads research and data at health insurance comparison site HealthPocket. That means if a plan had a $1,500 deductible, it would in effect become a $6,000 deductible during a year.

Coleman says the average use of short-term coverage was nearly seven months, so many consumers were having their deductibles reset three times.

Consumers paid more for fewer choices under the Affordable Care Act, Health and Human Services Secretary Alex Azar said in a statement. The short-term plans "provide a much more affordable option for millions of the forgotten men and women left out by the current system," he said.

“The Affordable Care Act left about 28 million Americans without insurance even though it promised to provide affordable insurance to everybody, and for those who have it, premiums doubled over the course of President Obama's tenure," Azar said on CNBC on Wednesday. "What President Trump is trying to do, is make more affordable options available to people … and they may be as much as 50% to 80% cheaper than the Obamacare exchange plans."

Azar described the plans as being for people "in the gig economy, who are independent contractors who may not get employer insurance; for those individuals who may have three part-time jobs and not get employer insurance; for those people transitioning between jobs; for the kid who left school and is headed to a job, but doesn't have insurance; or for the folks in rural America where they may not have access to an affordable Obamacare plan.”

The Affordable Care Act required individual plans sold on and off the marketplace to cover a group of set benefits, including emergency, maternity and mental health care.

Coleman says insurance benefits under short-term plans will be better with the three-month restriction gone. Still, the fact that people with pre-existing conditions – which could be anything from acne to cancer –  can be discriminated against or not have bills related to the condition covered will likely cause many people with health problems to avoid the new plans.

“With the elimination of the fine in 2019 for people lacking Obamacare-compliant coverage, consumers will have only the premium of an Obamacare alternative to consider as opposed to the alternative’s premium plus the expense of the fine,” Coleman says. “This will make a low-cost option like short-term insurance even more attractive, particularly if insurers further adapt their benefits and conditions of coverage to better align with the needs of the unsubsidized population.”

Ronnell Nolan is CEO of the group Health Agents for America.
HAFA

Health insurance brokers, who had seen their role diminish under the ACA, welcomed the new rules to expand the use of short-term plans.

Ronnell Nolan, CEO of Health Agents of America, says she’s happy her clients have a “viable option” now that the penalty for not having an ACA plan is being eliminated.

“It is not a silver bullet, but the rates are less,” says Nolan, a Louisiana insurance broker. “Our clients can’t continue to pay rate increases in the double digits.”

Under the Trump administration's rule, these short-term plans will be renewable for up to three years. That means consumers may be able to stick with a plan for up to 36 months instead of shopping for a new plan each year. However, short-term insurers will be allowed to raise rates each year.

"Our hope is folks who are looking at short-term coverage instead of the ACA are doing so with their eyes open," said Sean Malia, senior director of carrier relations with eHealth, a private online insurance marketplace. "These plans are less expensive for a reason. There are very important benefits that are included in the ACA and are not in short-term" plans.

What's your healthcare coverage experience? Tell us at healthinsurance@usatoday.com