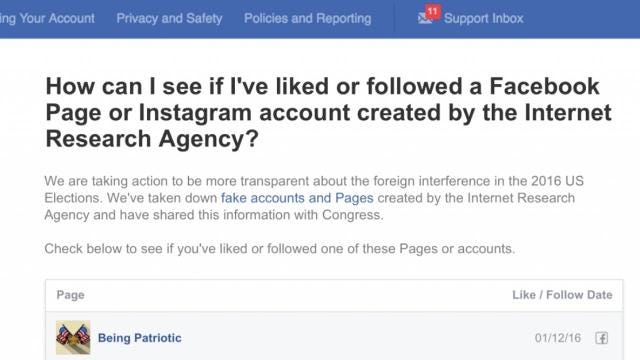 Credit: Matt Rourke, AP
The Facebook logo is displayed on an iPad.

WASHINGTON — Federal election regulators told a political group Thursday that its Facebook ads must include disclaimers showing who paid for them, wading into the debate on social-media advertising as the government grapples with revelations about Russian use of the platforms in last year's election.

But, on a unanimous vote, the Federal Election Commission (FEC) made it clear that its action applied narrowly, and it still planned to work on broader rules governing digital advertising next year.

"This was a small step forward today," Ellen Weintraub, a longtime Democratic member of the commission, said after the vote. "Hopefully, we'll be able to take a slightly larger step forward when we get to the rule-making."

The commission's vote Thursday clarified that Take Back Action Fund, a political group associated with Republican political consultant John Pudner, must include disclaimers on its proposed Facebook image and video ads that call for the election or defeat of candidates.

But the legal opinion approved by commissioners warned that only an organization engaged in political activity "indistinguishable" from that planned by Pudner's group should rely on the guidance approved Thursday.

"I don't think this is an earth-shattering answer that will affect lots of people going forward," Caroline Hunter, the commission's Republican vice chairwoman, said during Thursday's debate.

The commissioners often are bitterly divided along partisan lines, and they wrangled considerably Thursday over how to require the disclaimers on Pudner's ads while making it clear that their views on how to regulate the digital world could diverge.

"Some of our concern is making sure we don't decide too much" in advance of the broader rule-making, said Matthew Petersen, a Republican member of the commission, nominated recently for federal judgeship by President Trump.

The action comes as policymakers try to determine how to deal with the use of social-media to shape elections.

Earlier this year, Facebook disclosed that it had identified more than $100,000 in political ads purchased by a Russian company with ties to the Russian government. Most of the 3,000 ads focused on hot-button issues such as immigration and gay rights. They ran between June 2015 and May 2017.

A pair of bills in Congress would go further, requiring social-media companies to make copies of political ads available for public review and would extend a slew of campaign-finance laws that currently apply to television and radio ads to the digital world. It also requires all advertising platforms — whether broadcast or digital — to "make reasonable efforts" to ensure foreign interests aren't paying for political ads.

Facebook hasn't endorsed the bills on Capitol Hill, but officials with the social-media giant have said they are open to some political ad disclosure requirements.

"As the Federal Election Commission contemplates requiring disclaimers in online political ads, we submitted comments in support of such efforts. And as Congress considers ad transparency legislation, we stand ready to work with lawmakers.”

Federal law, predating the rise of social media, has required political ads to include disclaimers that indicate who paid for the commercials. The FEC has allowed carve-outs for ads where disclosure is impractical — such as bumper stickers and skywriting.

In 2011, Facebook asked the FEC for an exemption, but the agency deadlocked on the question.

Pudner, who has become a vocal advocate for campaign-finance regulations, told commissioners he sought guidance because some political consultants "think you never need a disclaimer on a Facebook ad."

Most of the social-media ads circulated by the Russian-aligned group in the 2016 election did not call specifically for voters to elect or defeat a candidate but fall into the category of so-called "issue ads" — an area still to be tackled by the FEC.