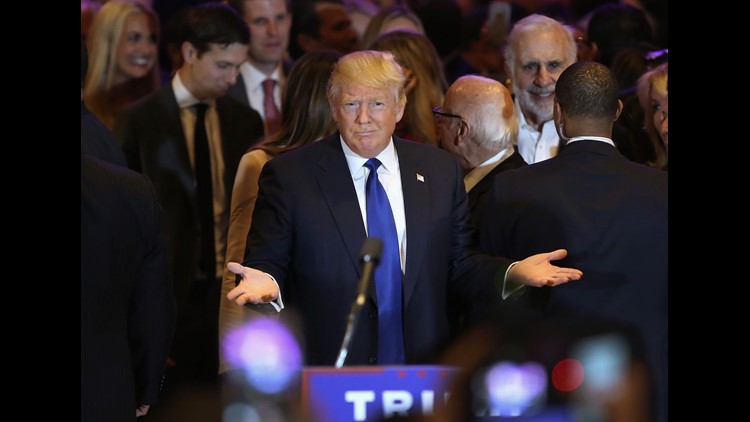 WASHINGTON – Reversing course, President Donald Trump delayed the release of classified FBI documents on Friday after the Justice Department and foreign allies objected amid concerns that their publication may damage the investigation of Russian election interference.

The Department of Justice Inspector General "has been asked to review these documents on an expedited basis," Trump tweeted. "I believe he will move quickly on this (and hopefully other things which he is looking at)."

Trump said he has met with Justice Department officials, and "they agreed to release them but stated that so doing may have a perceived negative impact on the Russia probe. Also, key Allies’ called to ask not to release."

He did not identify which allies, though the United Kingdom and other international intelligence agencies have provided information on Russian efforts to interfere in the 2016 U.S. presidential election.

The president on Monday ordered the Department of Justice and director of National Intelligence to declassify documents related to a warrant to monitor the communications of Trump campaign foreign policy adviser Carter Page.

Trump has also ordered the release of text messages of FBI and Department of Justice officials relating to the Russia investigation.

In recent days, U.S. officials said it may be a while before any documents are released – if ever – because of a potential objections within the intelligence and law enforcement communities.

U.S. intelligence officials are reviewing the documents to remove sensitive information following Trump's order. The president has said he believes the documents will bolster his argument that investigators in special counsel Robert Mueller's Russia probe are biased against him.

But Democrats say Trump wants to make the material public to try to undermine  Mueller's investigation.

I met with the DOJ concerning the declassification of various UNREDACTED documents. They agreed to release them but stated that so doing may have a perceived negative impact on the Russia probe. Also, key Allies’ called to ask not to release. Therefore, the Inspector General.....

....has been asked to review these documents on an expedited basis. I believe he will move quickly on this (and hopefully other things which he is looking at). In the end I can always declassify if it proves necessary. Speed is very important to me - and everyone!

'Off the charts' improper

David Kris, a former head of the national security division at the Justice Department, said Trump's declassification order is "off the charts" improper because he is seeking public release of information "in a case in which he is a subject."

Publication of some of these documents could also expose sources and methods used by federal investigators, thereby shutting down avenues of valuable information, said Kris, a founder of the Culper Partners consulting firm.

Kris said he doesn't know if Trump will ultimately back down from his request.

"Our institutions are resilient, but they should not be tested in this way," Kris said. "This is not normal."

Rep. Adam Schiff, D-California, the top Democrat on the House Intelligence Committee, said objections from the Justice Department and the intelligence community should be heeded.

"The President, the White House Counsel, and the President’s personal lawyers nevertheless seek access to this material for the corrupt purpose of discrediting the Special Counsel," Schiff said. "We cannot allow that.”

Mueller's team is investigating, among other things, whether there was any coordination between anyone from his campaign and Russia and also whether there were any efforts by the president or his aides to try to obstruct the investigation.

Trump has called the Mueller probe a "hoax" and a "witch hunt" and has denied any collusion between his campaign and Russia.

Democrats say the disclosure of the FBI and DOJ documents would be harmful to the country's interests because it would reveal sources and methods of U.S. investigators.

In a letter to FBI Director Christopher Wray, Sen. Jeanne Shaheen, D-N.H., said that until Trump's order, "there has always been the implicit understanding that sources and methods will not be released for political purposes, which puts lives at risk,"

In the letter, Shaheen also said that Trump's "decision to personally insert himself into the investigative process constitutes a dangerous attempt to infringe upon the impartiality of the Department of Justice and the FBI."

In his tweets, Trump said he reserves the right to release the material at a further date.

"In the end I can always declassify if it proves necessary," Trump said. "Speed is very important to me - and everyone!"