Already in trouble, dairy farmers are now getting hammered by tariffs 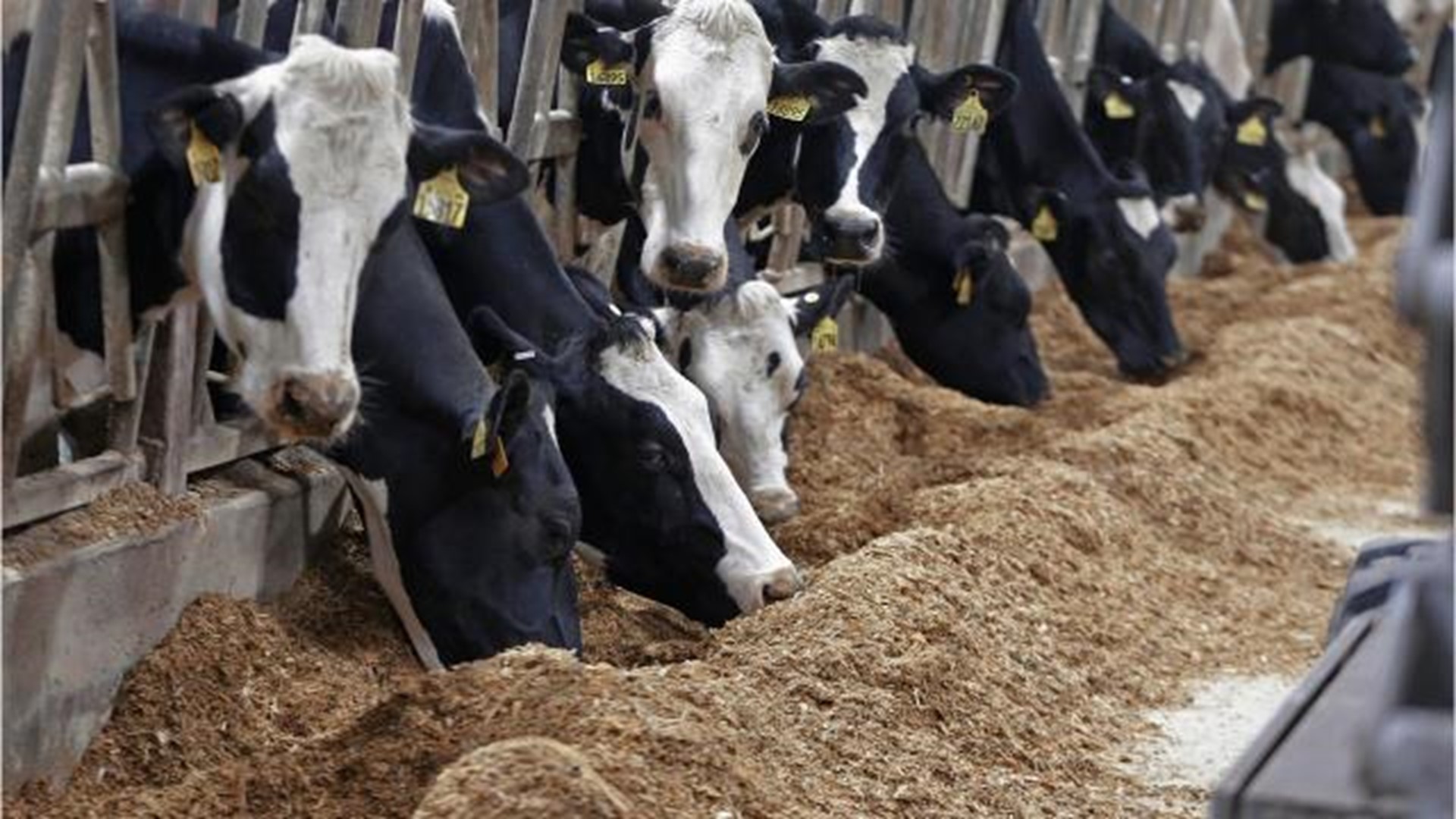 Credit: Mark Hoffman / Milwaukee Journal Sentinel
Some of Stokes' family herd walks around in their pasture at their farm in Omro, Wis. All the animals in their herd have unique names instead of numbers like many dairy farmers.

MILWAUKEE -- The U.S. dairy industry is getting hammered in trade disputes with Mexico, China and Canada, putting farms already in trouble at even greater risk.

Wholesale cheese and butter prices have slumped in recent weeks as buyers and sellers worry about the effect of new tariffs on dairy products, according to Pete Hardin, publisher of The Milkweed, a dairy industry publication based in Brooklyn, Wis.

“It’s a collapse of confidence in the world market. Globally, there’s some spectacular stuff going on,” Hardin said.

About 90 percent of milk from Wisconsin, the state best known for dairy, is turned into cheese, and all but about 10 percent of that cheese is sold outside the state’s borders.

Mexico buys nearly a quarter of all dairy products exported by the U.S., and the American dairy industry is reeling from $387 million in Mexican tariffs — of between 15 and 25 percent — on cheese.

Hardin, who has been in the industry for decades, says the price that farmers receive for their milk could sink even lower than it is now — putting many farms already in trouble out of business.

“We are looking at a short-term washout of 20 percent of Wisconsin dairy farm milk income on a monthly basis. That’s how dangerous this mess is,” Hardin said.

“However you want to extrapolate the wider economic impact of a $75 million a month drop in Wisconsin dairy farm revenue, it’s painful.” 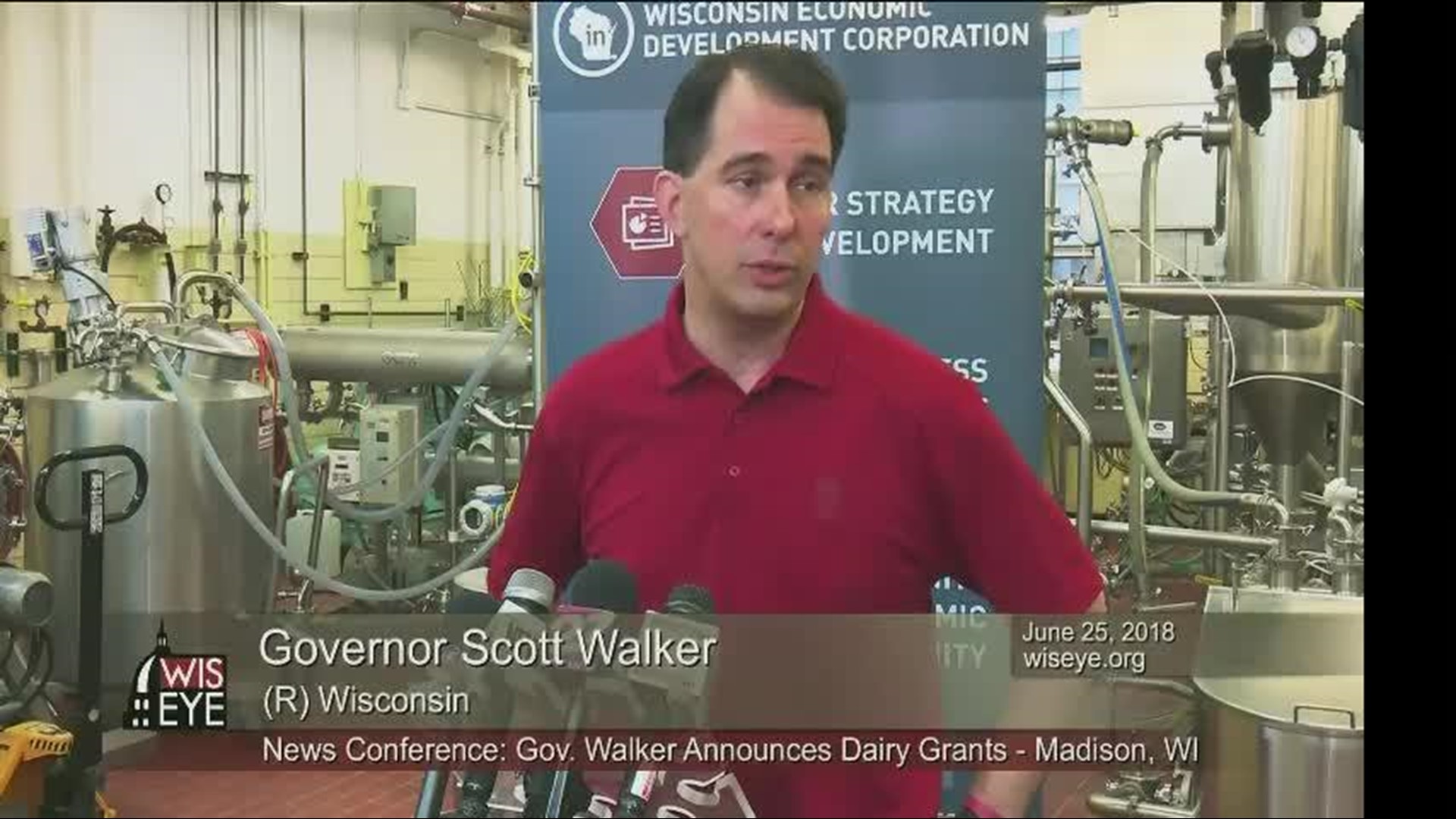 “The customers we have down there are saying, ‘Let’s put things on hold for a little while until we sort out the tariffs,’” Schwager said.

“They want us to absorb the bulk of the tariffs. … If we knew it was only going to be for three months we might do it at a loss, but if it’s going to be five years we definitely wouldn’t do it,” he added.

Credit: Chris Kohley / Milwaukee Journal Sentinel
Mike Sobolik, a cheesemaker at Sartori Cheese Company in Plymouth, shovels cheese curds to the end of a cheese table. Water is slowly drained from the table as the cheese is stirred and salt is added.

Sartori, which buys milk from 130 Wisconsin dairy farms, exports products to 49 countries. Only about 10 percent of its sales are in exports, but it's been a fast-growing part of the company's business, according to Schwager.

U.S. cheesemakers were at a trade disadvantage with the European Union even before the EU increased the duties on select-American products, according to the dairy industry.

The industry, overall, is reeling from retaliatory tariffs imposed by the EU, Mexico, Canada and China in response to tariffs that President Donald Trump has levied on foreign steel and aluminum.

“It’s really uncharted territory, at least for us,” Schwager said, adding that tariffs are sometimes the difference between showing a profit or a loss on products.

It’s very difficult to export cheese into Europe and Canada, said Errico Auricchio, president of BelGioioso Cheese based in Freedom.

Of the trade disputes, he said, “My thoughts are to wait and see because it’s changing every day. We will see who blinks first.”

Wisconsin lost 500 dairy farms in 2017, and about 150 have quit milking cows so far this year, putting the total number of milk-cow herds at around 7,600 — down 20 percent from five years ago.

With collapsed prices of milk, grain and other commodities, farmers are losing money no matter how many 16-hour days they put in milking cows, caring for livestock and planting and harvesting crops.

Small dairy farms have been disappearing from the rural landscape for decades, but the problem has been compounded by a sharp decline in farm-milk prices that's now in its third year and has spread across the country.

Farm cooperatives have urged members to think twice about adding more cows to their operations when the marketplace is awash in milk. Some have even offered incentives for members to quit farming altogether.

Federal court data shows the Western District of Wisconsin had the highest number of Chapter 12 farm bankruptcies in the nation in 2017, and that's only a glimpse into the problem since Chapter 12 is a relatively rare tool used in bankruptcies.

Farmers say the downturn is worse than one they experienced in 2009 because it has lasted longer and their costs are higher now. Many dairy operations are drowning in debt; in some cases, they have a half-million dollars in unpaid bills.

Hardin says many dairy farms don’t have much financial staying power left after more than three years of depressed prices. He’s also hearing that rural banks and towns are being hurt by farmers struggling to pay their bills and buy things.

“I had a farmer tell me last week that he’s contemplating bankruptcy, and on top of that, he said his local bank is over-extended on agriculture loans, putting it in hot water with federal regulators. … This has far wider implications than just what’s going on with the dairy farms,” Hardin said.

New giant BUCKS sign installed in front of the arena

Who we are. Where we go. What we need to know.

Each week in this newsletter, Sarah Hauer will serve as your city guide and share stories about Milwaukee, its people and what's happening around town.
Sign up