'My kid doesn't vape...' Well, their friends do

The FDA calls the startling increase in kids and teens vaping an "epidemic." In a three part investigative series, 2 On Your Side's Emily Lampa gathers information that you need to know about youth vaping, so you can have a meaningful conversation with your kids about why they should stay away from e-cigarettes. 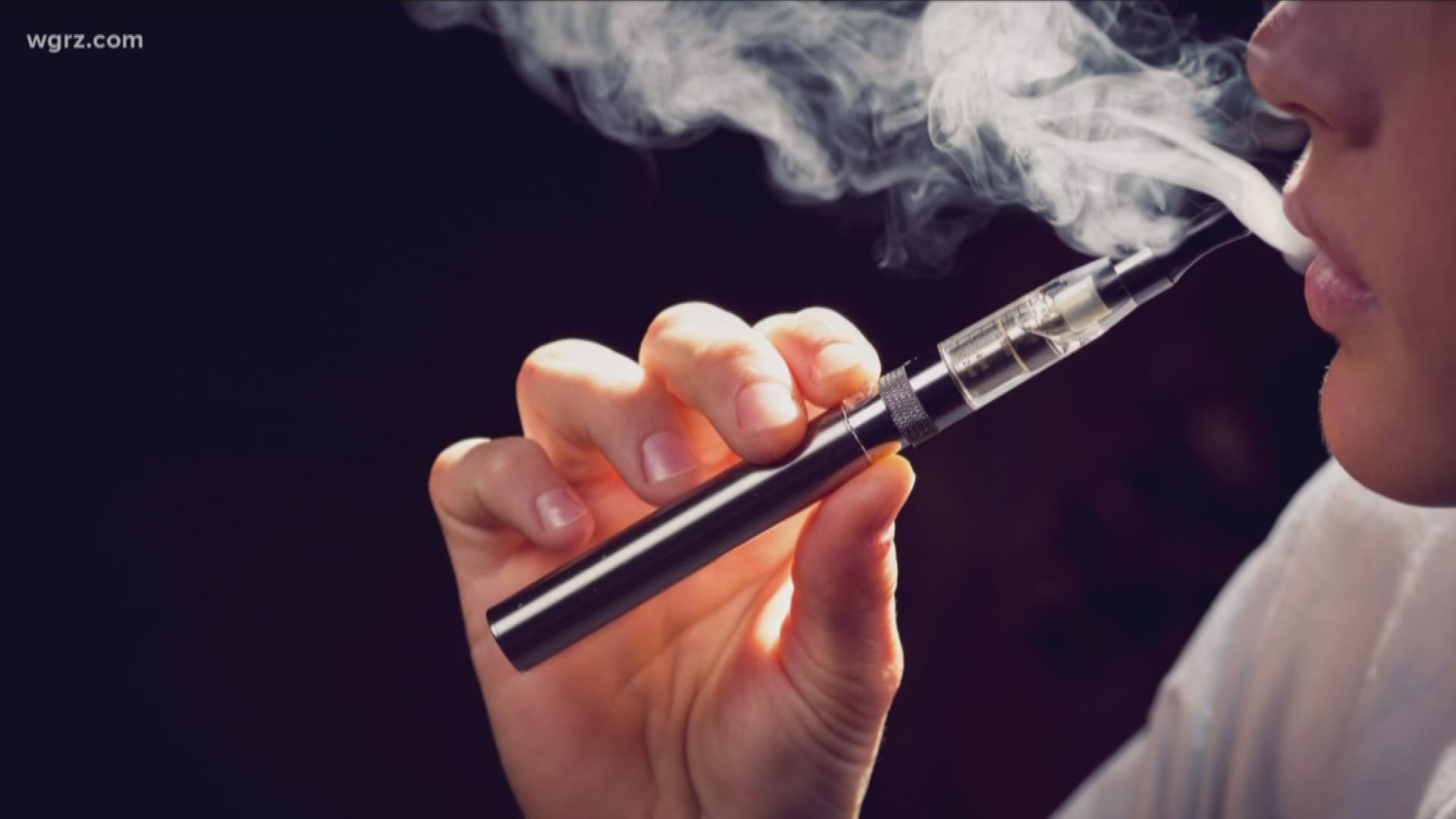 Bathrooms, locker rooms, hallways, stairways, the auditorium, gymnasium, classrooms, the cafeteria...it didn't take long to figure out that it was happening pretty much everywhere.

Iroquois Central School Superintendent, Douglas Scofield, with the help of their student resource officer, Joseph DePlato, brought together 11 high school students to talk to us about e-cigarettes and what they're seeing in school every day.

"In the hall...at people's lockers they do it," added freshman, Emily Wacker. "They lean into their locker and put it through their sleeve."

"Some kids use it during class and stuff," said junior, Dillon Tront. "They hide it in their sweatshirts and stuff like that."

The e-cigarettes come in all different sizes and shapes depending on the brand. Some of them look like pens or highlighters. The popular Juul brand looks and acts like a USB flash drive which you can stick into your computer to charge.

For this reason, they're easily hidden and used, explains senior Rachel Kelly, "If you have a Juul it's easy to have it so you don't blow any smoke out and barely any scent comes out. You can't even smell it yourself when you're doing it, or if someone next to you is doing it. You really can't smell it."

How teens are getting e-cigarettes:

"It's way too easy," admits senior, Joe Sullivan, "because you have friends that were seniors like a year or two ago, and they can just go and buy it for you. Even some kids like in your current grade are 18."

"They just don't ID anyone that comes in," said Kelly of stores that sell illegally to minors. "As long as you kind of look the part...you can get it."

Superintendent Scofield weighed in, as well, "It's really sad to say that some of them really say, "Well, my parents bought it for me...well, my parents gave it to me. So, why would a parent be giving a child something that is addicting and could cause them life-long problems? Because that's a lack of knowledge."

Vaping is the norm for most teens:

Many of the seniors in this group tell us their introduction to vaping started day one of high school.

"The first time I saw it I was like, 'What the heck are they doing?'" recalls Kelly. "I was like, 'That's so bad.' And now it's just a normal thing, and people are just totally blind to it."

Now middle schools and even some elementary schools are reporting cases, as well.

"We have had kids and parents, both, report to us through our early intervention program that their children are vaping because they're being bullied if they choose not to," said Jessica Hutchings, Program Director for Kids Escaping Drugs Face2Face Program, in her testimony before the Erie County Legislature back in early January.

State health numbers show a 160% increase in youth vaping over the past four years. That's 27% of New York State teenagers.

Hutchings told legislators the number in many Erie County schools is closer to 80% of students are vaping.

"We have a zero tolerance (policy)," said Scofield, "but with that zero tolerance, it's still coming into the school. And any given day I'm sure if we went around and searched every single student, we would find quite a few of them."

Officer DePlato testified before the legislature, as well, "Our nurse already has prescriptions for students where she's handing out the nicotine gum to some of the students so they can get away from the vaping."

Nicotine risks are higher with e-cigarettes:

One Juul pod, a popular brand among kids and teens, can deliver as much nicotine as a full pack of cigarettes.

Early studies show nicotine use among young people can lead to learning and behavior disorders. Even e-cigarettes marketed as containing zero percent nicotine have been found to contain nicotine.

And, right now, there are very few facilities set up to treat kids with nicotine addiction.  At Kids Escaping Drugs, they had been handling calls through their Early Intervention Program.

"In the last year, we have had such a tremendous influx in the number of referrals for that program," explains Hutchings, "specific to adolescents who are caught vaping, that we have developed a separate program from that Early Intervention Program just to address the vaping needs in the community."

Where do kids get treatment for nicotine addiction?:

Jessica Hutchings tells us when schools or a parent has concerns about a child's vaping habits and refer then to KED, they are immediately signed up for the Community Education Night. This happens twice a month and is for both kids and their parents.

KED also does a number of community presentations in and out of schools. The adult sessions are 40-60 minutes long.

In terms of actual nicotine replacement therapy, this is not easy to get for youngsters because cessation products like gums and patches aren't recommended for kids under 18.

WATCH PART 2: Vaping in schools: Symptom of the bigger problem