The district and parent groups have been at odds for weeks over reopening plans and Acting Superintendent Dr. John McKenna's position. 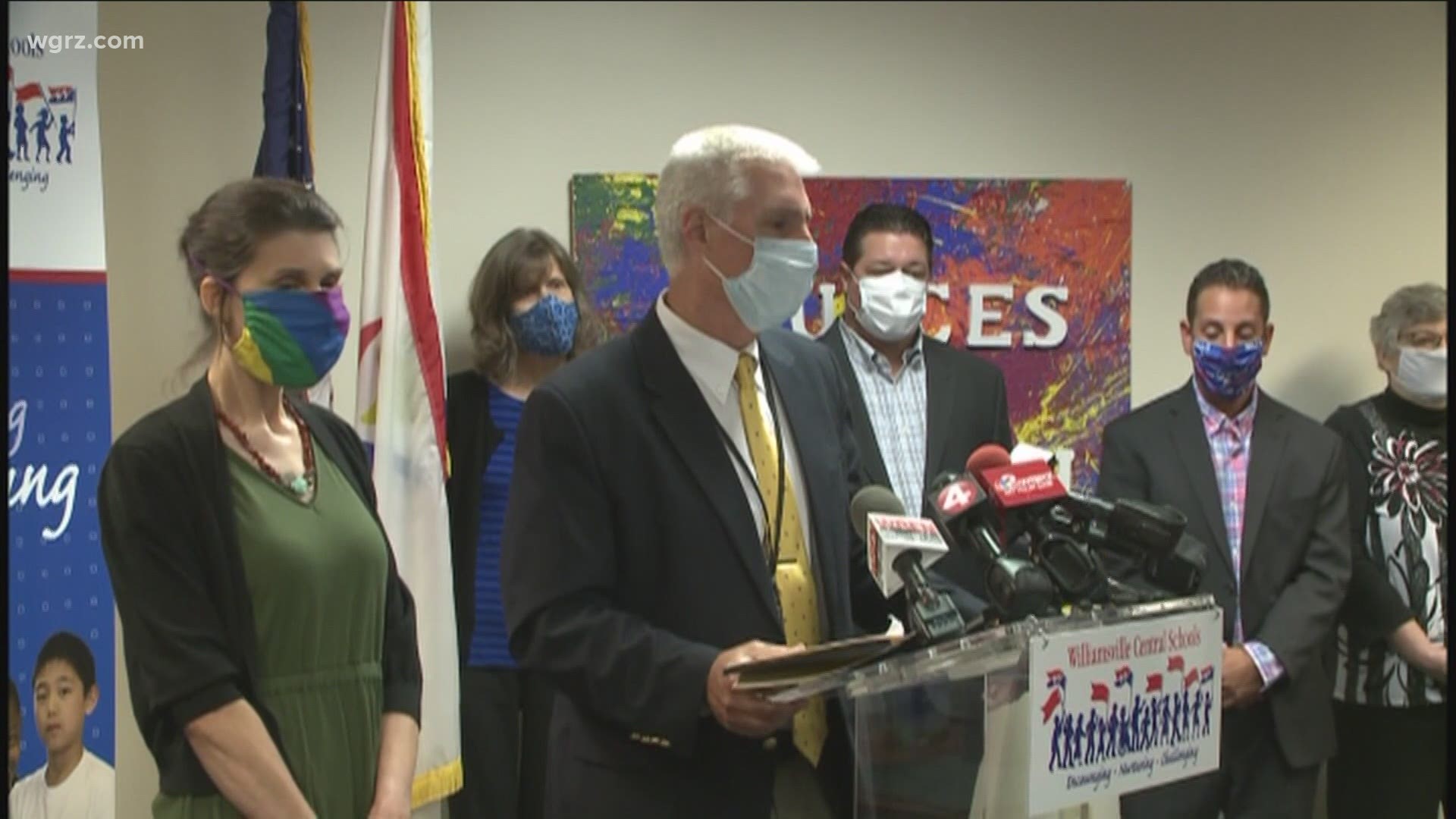 WILLIAMSVILLE, N.Y. — The Williamsville Central School District and various parent groups have been at odds for weeks. At times, contentious.

The school board meeting Tuesday night was no different, with thirty minutes being allocated for public comment. Public comment; however, without debate.

"This is a meeting held in public rather than a public meeting, which means we will not be engaging in a dialogue with members of the community this evening," it was announced at the board meeting.

That didn't sit well with parents who reserved time for the Zoom meeting thinking they would be able to get answers from school board members.

"My kid goes to school in Williamsville, we would appreciate some transparency," one parent on the Zoom meeting said. "This has been very disappointing for the way that you've treated our children and us."

As it has been for weeks prior to Tuesday's gradual reopening of the district, communication is the point of contention for many parents.

Several parents, for nearly a half hour during the public comment period, criticized the board and the district for not having a conversation about the concerns of parents.

"I'd like to first of all emphasize that this meeting is taking place on Zoom, and you're actually having difficulty communicating with us," another parent said via Zoom. "Do you realize that this is exactly the same experience our children are having now?"

Coming up at 6pm on @wgrz - the adults are fighting in Williamsville and I try to make sense of it all for you. pic.twitter.com/UayTHhCZbA

When 2 On Your Side asked the district about this on Wednesday, the district director of communication pointed out that they have multiple web pages loaded with information for parents, 17 YouTube videos, social media updates, and Acting Superintendent Dr. John McKenna attending PTSA meetings.

The district feels they’re communicating with parents in every possible way.

"We're making an argument that there's no communication," said Jonathan Rich from the Williamsville School Taxpayers Association. "Their response is not to communicate and interact with us but to flood all of the communication as much as they can, with nothing."

Rich feels the breakdown in trust has made communication between parents and the district nearly impossible.

"We still don't have answers to some very basic questions," Rich said.  "We had serious questions about the decision to give Dr. McKenna a contract as an interim superintendent, with no prior qualifying experience."

The district told 2 On Your Side that McKenna’s salary is based on the size and performance level of the district. Because of this, the board approved his salary of $230,000 Tuesday night. Williamsville is the second largest school district in Western New York with over 9,800 students, and the district even touted its recent number one ranking in Business First when answering our questions.

The big question for parents and district leaders right now is can this be fixed?

"The reestablishment of trust with the current board roster is going to be exceptionally difficult," Rich said. "We saw that yesterday."

Rich was on the school board Zoom call Tuesday night and spoke, but did not get the back and forth with district leaders he was hoping for.

"I guess, the number one question I would ask, if I had the opportunity is, why do we have such an emphasis on being unique as a district and pushing asynchronous learning on to students whose academic futures are at stake here?"