The Lockport High School robotics team, Warlocks 1507, are on the road to a world championship. But it's the education these students are gaining that's truly one of a kind 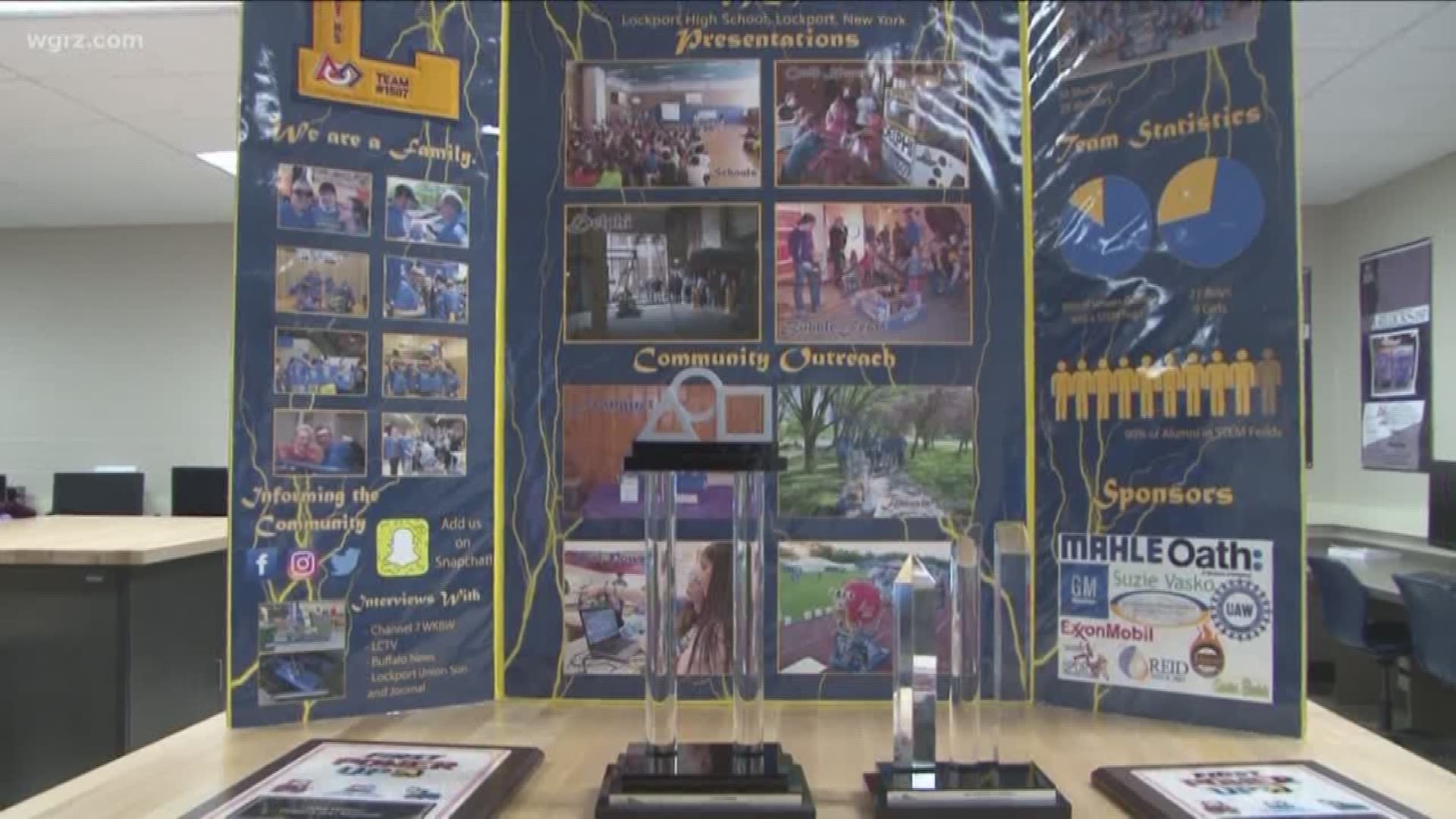 It’s a group of 30 students, joined by more than a dozen mentors and alumni.

And one big robot.

After winning the Finger Lakes Regional Tournament in Rochester, Warlocks 1507 have their sights set on a world championship.

But first, they’ll represent Western New York at the Buckey Regional tournament in Cleveland, with one final chance to perfect their strategy, and scout out potential opponents and allies. It’s all part of the FIRST Robotics Competition, an international competition pitting high school students against each other in a series of contests.

You can follow the Warlocks by visiting here, where you can also watch live matches in real time throughout the weekend.

"Being there with so many other teams can be a little bit intimidating, but it's just as fun,” said 16-year-old Junior Lexi Madden, this year’s team president.

Madden is being humble: the Warlocks have had their own intimidating presence at recent tournaments, showing off advanced approaches to scouting other teams, and design plans for their robot that other schools have never even imagined.

In a competition that pairs three robotics teams together in every match, the Warlocks focus just as much on scouting every other team’s strengths, weaknesses, and potential strategies at each event they attend.

Other schools, said Madden, have made a habit of trying to gain the Warlock’s favor as potential teammates.

And it worked pretty well in Rochester.

"We were all down by the field, and we were in the second final, and we were just all waiting to see if we would win, because if we won that match, we won the whole thing,” Madden said. “When we saw that we won, everyone was jumping around, hugging each other, high-fiving and screaming. It was just one of the best moments of my whole robotics experience."

It’s an experience that captures so much more than any trophy ever could, according to team mentor Gary Caudill.

He remembers that first team meeting at the beginning of 2018, where he explained the rules of this year’s competition.

From there, the team had only six weeks to build their robot from scratch.

"They all had an idea as to how they were going to win, there's no bad ideas because some crazy idea might lead you to some idea that you can really use, so we don't throw anything out,” said Caudill. “But everybody has an idea as to how to win this. Nobody's afraid to attack this."

And that, Caudill beams, is what makes clubs like his so rewarding to high school students aching to learn in new, creative ways.

"You can see the wheels turning. You'll be looking at a kid and all of a sudden you can see the lightbulb go on, and you'll know he's got something,” Caudill said. "You'll get a kid for the first two years, might not say a word, and by the time he's a senior, he's bossing people around, he's telling people 'You can't do this, it's gotta be done this way, this is the rule...' They really come into their own. It's just amazing to watch them grow."

One perfect example is student-turned-mentor Adam Stockton, who graduated in 2012 before coming back to teach and guide future students.

"It was a really good experience for me and I wanted to give back to what I was able to get out of it at high school,” said Stockton.

While he was a student, Stockton helped elevate the team’s competitive edge by creating his own program on the school iPads.

And he drew some added attention that he never expected.

"Apple was coming into the school to see how the students and teachers were using the iPads in their classrooms, and we signed up for a slot for them to come and see,” said Stockton. “They were very impressed. Most people were using it to surf the web, and we were using it to actually create programs. They told me that we could put it in the store and we could either sell it or offer it for free, but its kind of a one year thing, the game changes every year.”

But alumni aren’t the only mentors helping the Warlocks get real-world experience: professional engineers, programmers, electricians, and designers all contribute to the club’s learning experience.

"Those people come and work with our kids, and they show them what it's really like to be an engineer, not a teacher standing up there saying 'This is what an engineer does,’” said Caudill. “We have electricians that come in from General Motors, and they’re showing our kids how to wire the robot. You can't buy that kind of experience."

Regardless of how the 2018 Championship plays out, Caudill says his team wants to set an example in other ways.

Right now, the Buffalo area has about 5-6 certified FIRST teams competing in their own robotics events; eventually, he’d like to see that number spike up to 20 teams.

And if the competition isn’t rewarding enough for high school students, there are some pretty sizable funds up for grabs: $50 million in scholarship funds are available every year, exclusively to students enrolled in FIRST robotics clubs.

Caudill said he wants that money to come back to Western New York schools.

He recalled his own memories of starting the Warlocks from scratch 14 years ago: “"We had four teachers, one or two engineers, and three students, and we'd drive out to Newfane High School every day, and they would teach us what we had to do, and then we took our own team, brought it back here to the high school."

And now it’s time, he said, to return the favor.

"We mentored Nichols. Nichols in turn mentored St Joes. One of our students that was then mentoring Nichols is now mentoring a team from Buffalo... This is the way you do it. This is how you get things started."