Lessons being taught based on Black Lives Matter principles, which the author finds disturbing, are being taken 'out of context,' according to BPS administrator. 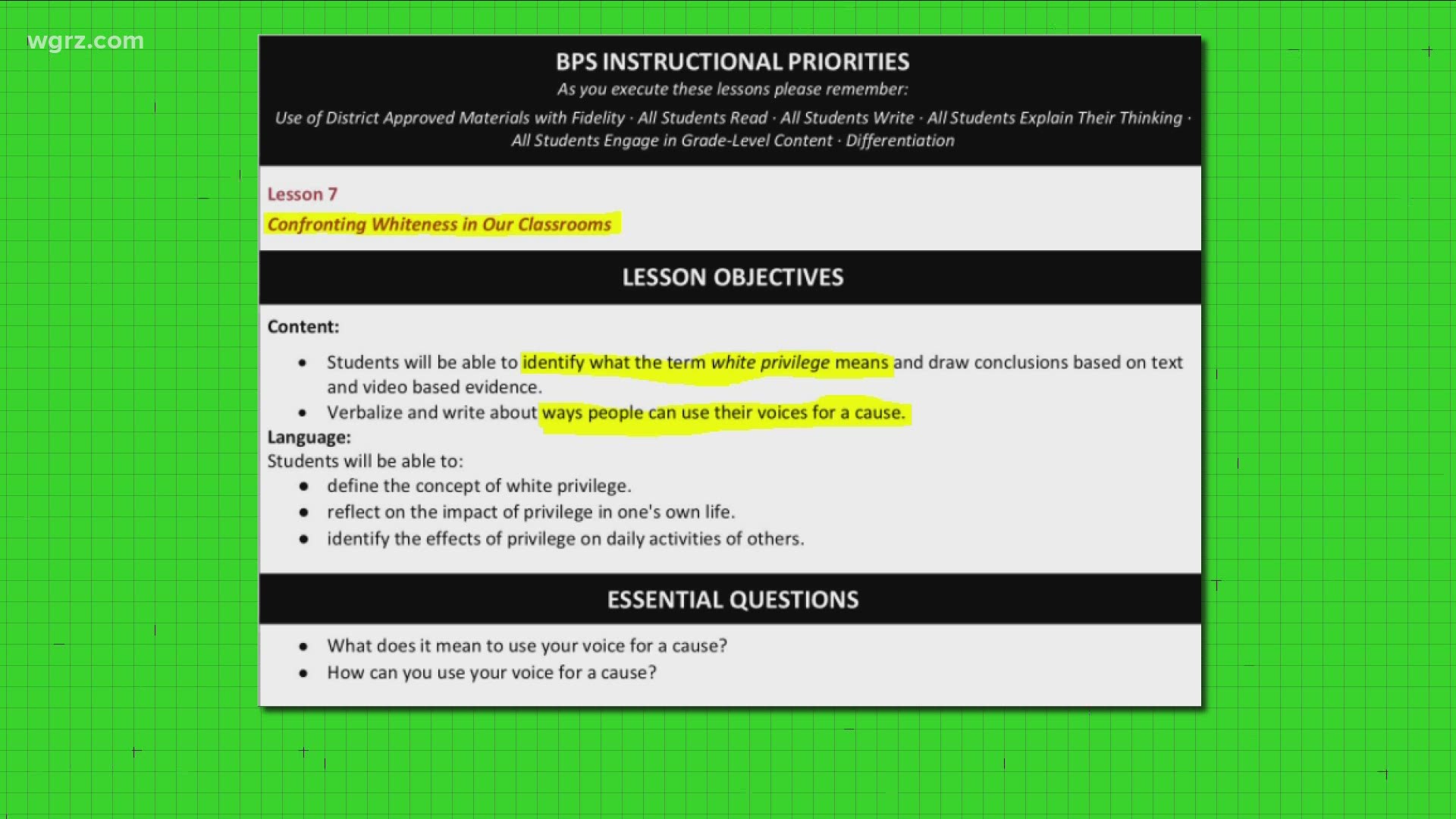 BUFFALO, N.Y. — It's an article which has been shared widely on social media, and which has stirred a firestorm of controversy.

Entitled "Failure Factory," it reports that the Buffalo Public schools teach students that all white people play a part in perpetuating system racism, while presiding over miserable student outcomes.

The article was written for City Journal, a publication of the conservative-leaning Manhattan Institute for Policy Research.

It's authored by Christopher Rufo, director of the Discovery Institute's Center on Wealth & Poverty.

For this story, 2 On Your Side reviewed the  Buffalo Public Schools Culturally and Linguistically Responsive Initiatives Strategic Plan, its Emancipation Curriculum, which it says was developed to respond to systemic oppression and racism and with foundational teaching strategies are based on Guiding principles from Black Lives Matter.

We also reviewed some of the lesson plans used to teach the curriculum, which were once available on the district's website but no longer are, and interviewed the architect of much of the program, Fatima Morrell, the district's Associate Superintendent for Culturally and Linguistically Responsive Initiatives.

Rufo accuses her of pushing "radical politics" on who teachers who must submit to supporting them or risk professional retaliation.

"We definitely have not pushed any political agendas," said Morrell, who noted the curriculum was developed over a period of years with input from teachers, administrators, and parents who approved of it.

The Emancipation Curriculum notes that "teachers and administrators are trained to problematize their own implicit biases and begin their anti-racist journey."

We asked Morrell to explain that.

"There is implicit bias, and there is systemic racism, and so we want to problematize that," said Morrell. (Webster's defines "problematize" as a transitive verb meaning "to consider or treat as a problem.)

"All of us have the power ... to create opportunities for honest conversations and create a landscape of equity if we want it. So when I'm saying that, I am actually talking about how we come together as one around issues of racism because we all do have a part to play in our country," Morrell said.

The article mentions a video shown to kindergarteners, which depicts Black children who died in police shootings.

But while the article contends the video dramatizes the danger of kids being killed by "racist police" in "state-sanctioned violence," there is no depiction of any police, any violence, or even any mention of how the children died.

We were not able to obtain the lesson plan that goes with this particular part of the curriculum, but when we asked Morrell if children are being taught of the dangers of being killed by racist police and state-sanctioned violence, Morrell replied, "that absolutely was not taught to children."

Rufo wrote that in middle school kids are taught that "the current wealth gap is the result of Black slavery, which created unjust wealth for white people," who remain "unfairly rich," and that, "all white people play a part in perpetuating systemic racism."

These are indeed excerpts from a research article that students are assigned to read as part of a lesson for 7th and 8th graders.

Morrell, however, insists that the the article is intended to provide students with concepts and theories surrounding systemic racism, and not to indoctrinate them into a particular cause.

"We give them the research, and we allow them to have the discussion, and then to problematize and question anything they are learning," she said. "Then we allow our students to make up their own minds about positions that they will take."

Reading the article is part of a lesson called  "Learn to be an Anti-racist," the stated objectives are which:

In high school, students must begin “confronting whiteness in [their] classrooms,” with teachers asking white students to atone for their “white privilege” and to “use their voices” for the cause of left-wing "antiracism." They must become activists. pic.twitter.com/PQvDj5M2jQ

Rufo also writes of a lesson entitled  "Confronting Whiteness in our Classrooms," where teachers purportedly ask white students to atone for their "white privilege" and to "use their voices" for the cause of anti-racism.

We can verify that there is such a lesson, and confirm that it calls for students to be able to "define the concept of white privilege," "reflect on the impact of privilege in ones own life," and "identify the effects of privilege on daily activities of others."

However, according to Morrell, the district's white students (who comprise 19% of the student population) are not being asked to "atone" for their skin color or any privilege.

"That's not in in our lesson," said Morrell, who cautioned that in her opinion, the article seeks to highlight certain excerpts of a wider curriculum for an incendiary purpose.

"You can't just pick out few grains of sand from a beach and say that tells the story of the entire beach. That's dangerous," she said.

And although the curriculum is woven widely into the coursework of students across the entirety of grade levels, Morrell said that any parent who finds the teaching objectionable can opt their child out of any lesson.

Rufo opines that the curriculum is not likely to improve academic outcomes in a district where, by 5th grade, 80% of students aren't proficient in math or English.

However, Morrell begs to differ.

"Teachers who expose children to culturally responsive practices, and when they center those students in the curriculum ... those students see themselves in positive ways," she said. "And when you engrain that into those students' minds, you don't have worry about test scores because academically they are going to excel."

Noting that much of the curriculum focuses on the accomplishments of minorities, which she insists have "marginalized" in textbooks, Morrell continued.

"They will know historically there are many things that come from people who look like them. But we are also edifying our white children when we also teach them about students who are sitting right next to them, who they may not know about because their history, and their story has been marginalized," she said.

Of minority students in particular, she added, "Confidence and the self-esteem levels come with them believing they can do and be anything they want to be. ... And they go off as good citizens into the world, and are valued contributors to American society, and that's what this does." 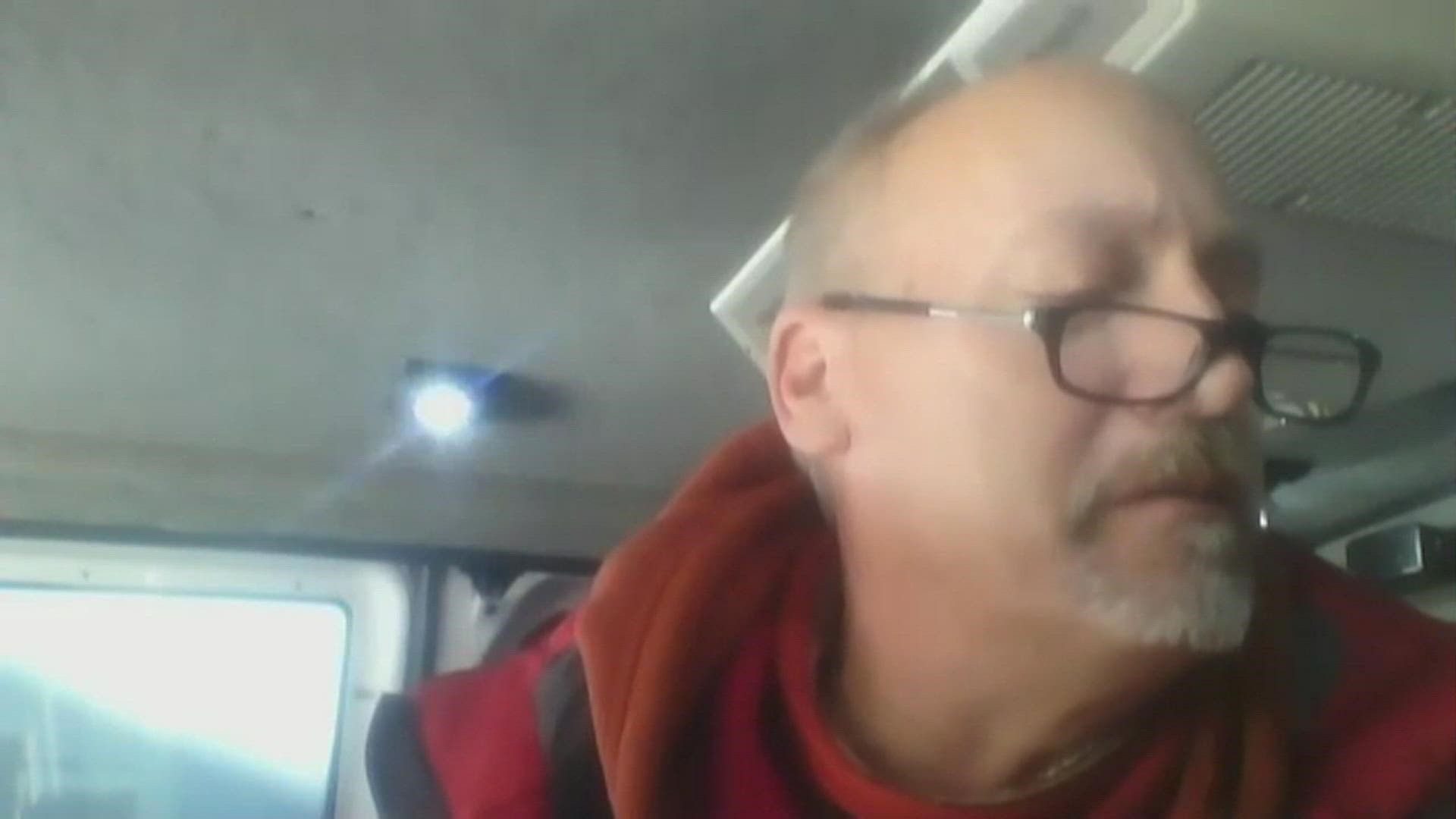