Unknown Stories of WNY: How a photo of his children helped identify a Portville soldier in Gettysburg

Portville's Amos Humiston, found gripping a picture of his children, became a national symbol of a father's devotion 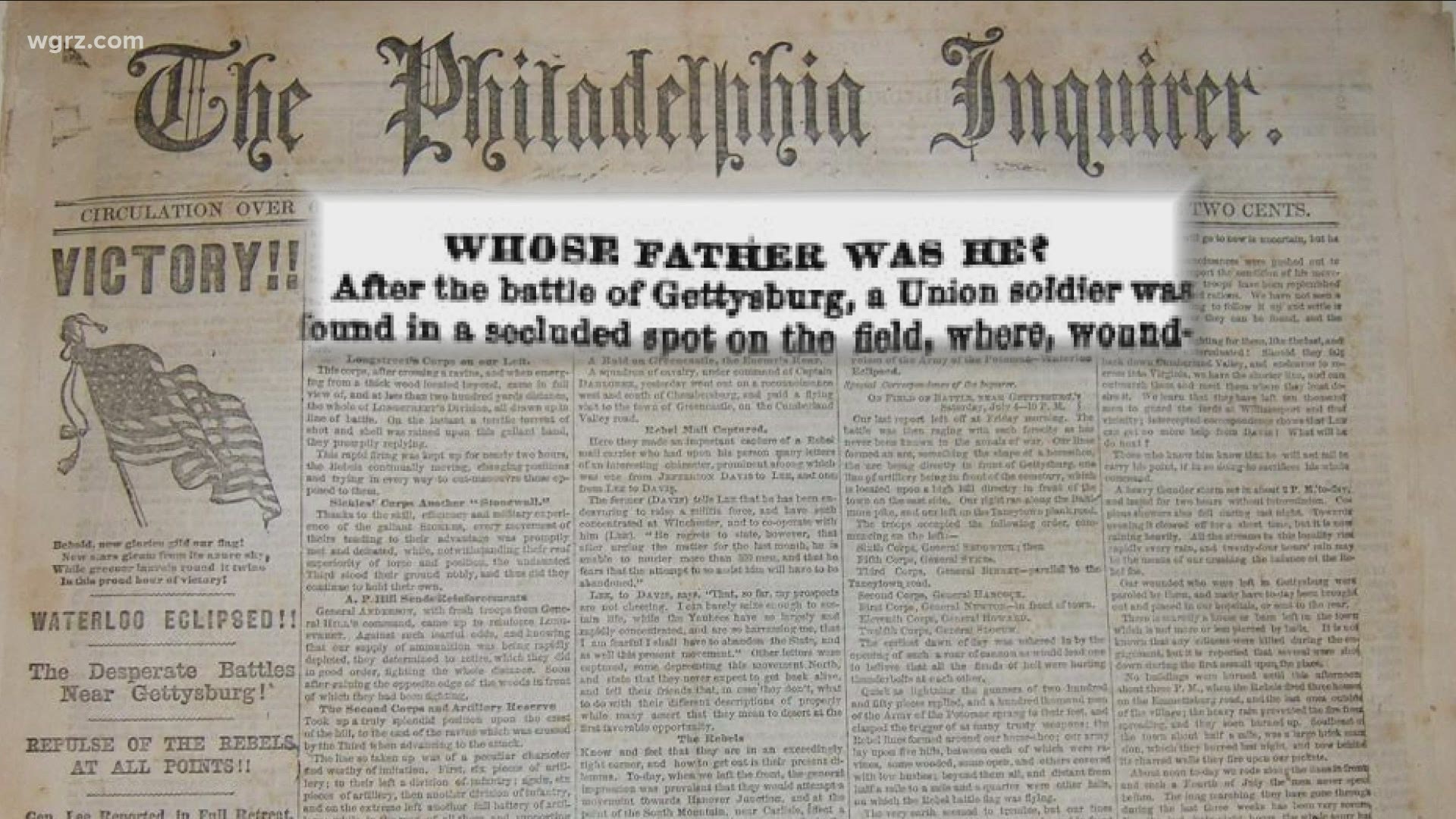 PORTVILLE, N.Y. — As we know, it seems there is always a Western New York connection, and that was the case when a mystery arose surrounding an unknown soldier from the battle of Gettysburg.

The body of an unidentified soldier was found gripping an ambrotype photograph of his three children. It was the last image he saw before death. it was a story of a father's devotion that gripped a nation.

Amherst native and accomplished civil war historian and author, Mark Dunkelman, says it was a mystery that captivated the north.

It was a mystery he came across when researching his great-grandfather's regiment, the 154th N.Y infantry, which was comprised of mainly Southern Tier recruits.

"It grew out of my interest in the regiment that Amos Humiston served in."

Credit: WGRZ
It was an image that gripped the nation: A dead union soldier clutching a photo of his kids after battle.

It is quite a story: a tavern owner's daughter came across the body and the picture. She brought it home and her father displayed it behind the bar.

The photo became a main point of conversation until a Philadelphia doctor named John Francis Bourns, immediately realized that the photograph was the single, sad clue to the soldier's identity.

Intrigued, Bourns convinced the tavern owner to give him the photograph so that he might attempt to locate the dead man's family. Bourns was on his way to treat the wounded, but at that point, he made it his mission to identify the unknown soldier.

Bourns produced hundreds of copies and spread the story through newspapers. The Philadelphia Inquirer carried the story under the headline "Whose Father Is He?"

Portville Historian Cindy Keeley says the story, which only included a description of the photo, "made a big sensation really and everybody was just devastated by it because the children were in a fatherless and it was just such a touching moment."

The story was reprinted by papers across the north, ultimately making its way to Portville and eventually to Mrs. Philinda Humiston, confirming the news she dreaded.

In his research, Dunkelman was able to locate the great-grandson of Amos Humiston and access the Humiston family archives.

"But what surprised me was how few mentions there were of this incident that made them was so well known in America. It was a tragedy obviously for the family and they just wanted to put it in the past," said Dunkelman.

Dunkelman pointed out that many articles were written about the identification of this unknown soldier, with headlines that read things like "The Last Thought of a Dying Father," but the vast majority focused on how he died, not who he was.

So Dunkelman, in his book "Gettysburg's Unknown Soldier: The Life, Death, and Celebrity of Amos Humiston", refocused his work on the man before Gettsyburg.

A man who was born in Owego, New York, honed his craft as a harness maker, tried his hand on a whaling ship, ultimately finding his way back to New York State and meeting the woman he would marry, and have three children with. The same children featured in this picture, which came to symbolize love and devotion, right to the end.

It was an image that gripped the nation. A dead union soldier clutching a photo of his kids after battle. This morning's #UnknownStoryofWNY the unknown soldier of Gettysburg and his ties to Portville. #Daybreak @WGRZ pic.twitter.com/dwAQGPl98v