A firefighter-in-training who was just diagnosed with Leukemia wants to wear a different fire company's t-shirt every day when he's in the hospital. 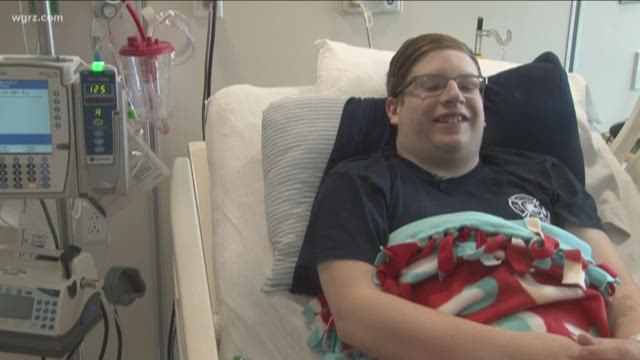 BUFFALO, NY - A young firefighter-in-training, facing the battle of his life, is asking fellow firefighters to come to his rescue.

Timothy Richardson, a 16-year-old Maryvale High School junior, is part of the Hy-View Fire Company's Explorer program, and has just been diagnosed with Leukemia.

It's putting him on the sidelines of doing what he loves most in life, and all he's ever dreamed of doing- being a firefighter.

"Knowing that people are on their worst days, just knowing that, and you can help them in their worst times, it really just gives you a sense of pride," Richardson told WGRZ's Melissa Holmes.

Richardson was showing signs of a sinus infection in mid-February. In the first week of March he was diagnosed with t-cell Leukemia, which he says is treatable. While he receives chemotherapy at Oishei Children's Hospital in Buffalo for at least the next month, he wants to wear a different fire company's t-shirt every day. He says his battle with Leukemia is expected to last at least two years.

"It's a battle and I'm going to have to go through it," said Richardson. "I've got a lot of support of the brotherhood from the fire department and my family is all pitching in to help. So it really helps. It really does."

Fellow firefighters- as they always do- are answering the call.

"I put the feelers out, town of Hamburg, town of Amherst, West Seneca, anybody that I knew and the outpouring has just been phenomenal," said Hy-View safety officer and Explorer advisor Joe Lent. "I didn't expect anything less. Timmy's going to have a lot of shirts to wear."

Timothy's father Matthew Richardson, a longtime firefighter at U-Crest Fire Company in Cheektowaga, and his mother Deana Richardson, are overwhelmed by the support. His sister, Michelle, 19, a former Explorer herself, is also by Tim's side. But Tim is learning is "family" is much bigger than he ever imagined.

"He knows he has his brotherhood of the fire department behind him," said Timothy's mom.

On Monday, Tim received several bins of packages from fire departments around the world. He says the response has been overwhelming.

More information on Richardson's battle with leukemia can be found on the Timmy's Battle Facebook page.

If your fire department would like to donate a t-shirt (size XL), badge or other item to Timothy, donations can be sent to:

UPDATE: On Monday, 3/12, less than a week since Tim's story first aired on WGRZ-TV, Tim received an estimated 1300 t-shirts and sweatshirts, bringing the total number to 1500... and counting.

"It's just it's a weird feeling, not knowing these guys and they're just reaching out from all over the world. It's all over the world now. I didn't think it was gonna get this far and it's definitely gotten that far, so it's crazy. It really is. It's hard to put into words," said Tim.

Here are just SOME of the packages Tim's received: